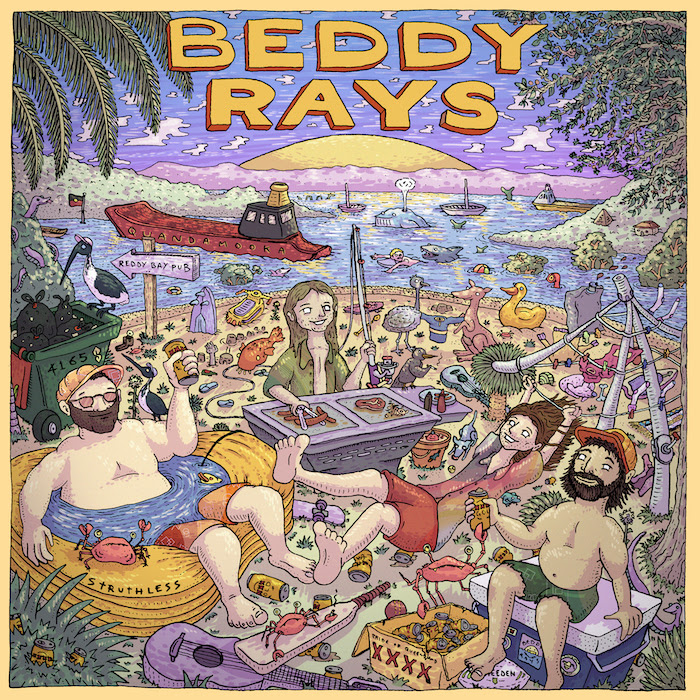 “A celebration of friendship and folly, this is, despite its creators’ easy-going demeanour, a serious statement of intent. When it comes to musical pick-me-ups, this quartet have produced one of 2022’s best so far.” – KERRANG 4/5

“Beddy Rays are the epitome of good summer vibes, with their surf-rock vibe and catchy lyrics.” – BEAT

“The Beddy Rays boys are sitting on a f*ckin rocket at the moment.” – AAA BACKSTAGE

Today, Beddy Rays release their wholeheartedly independent debut self-titled album. Beddy Rays is honest, raw and what Beddy’s are all about – mateship, Reddy Bay, good times, beers, and the importance of looking after yourself and checking in with your mates. To mark the release, the four-piece have dropped their melodic yet mosh ready new single ‘Handful,’ alongside the official video.

“Handful is about first impressions. More specifically, it focuses on meeting someone who initially gets the wrong idea of you,” explains Beddy Rays of the single.  “Throughout the song, the lyrics lean into openness and honesty as they key to pushing through the teething phases of a  relationship that starts awkwardly. The song was born years ago after Jacko woke up after a big night out and realised he’d said things to someone that they might have misinterpreted because they didn’t understand his personality yet. The lyrics grew from the feeling of wanting to prove he was a good person and to get another chance.”

Directed by Luke Dunning, and captured across Brisbane and Reddy Bay, watch Beddy Rays morph into their unexpected alter-ego’s on the official music video. “When we were slingin’ ideas around for this clip the main thing that was pokin’ its head out was the idea of us playing funny characters with their hands full for different reasons. So we created four different characters going about their chaotic daily lives with way too much on their plate. In typical Beddy’s fashion, this idea is just for a laugh and has bugger all to do with the actual meaning of the lyrics, and that’s the way we like it because we wouldn’t want to go and break a Beddy’s tradition now would we? So we ended up casting Jacko as the stressed-out businessman, Lewy as the wannabe influencer, Brad as the vain gym junkie, and Benny as the cranky janitor. We wanted all the characters to eventually follow the sound of music ultimately leading them to a Beddy Rays film clip set, so we threw that in as a little cherry-on-top closer to the clip for a bitta fun. Hope ya love it!” they add. 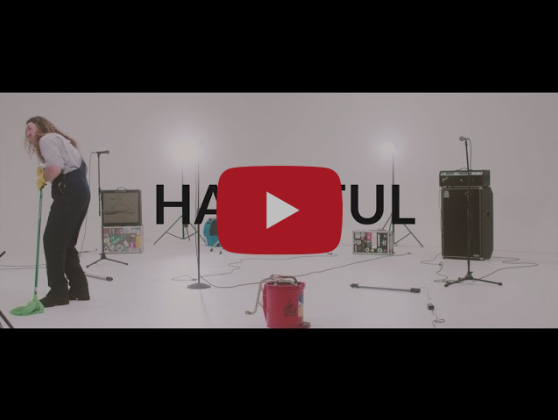 Beddy Rays have this to say of their forthcoming self-titled album, “When we started a band many years ago as young whipper snappers in Reddy Bay all we wanted to do was play gigs, sink tins and chat to all the legends we’d meet along the way. Now we have our very own album firmly in our grip, and to say we’re excited is a major understatement. We decided to go with a self-titled album for our debut because we believe this album IS Beddy Rays through-and-through. It’s made up of our recent singles and a bunch of brand newies we’ve been cooking up for you legends. A nice mixed bag of lollies! We hope you love it as much as we do!”

Produced by Brock Weston and Beddy Rays, and recorded at Brock’s Place in Brisbane, Beddy Rays features the aforementioned Handful, the thrasher Sort It Out, the chaotic Week On Repeat, the explosive Wait A While, a rowdy dose of Milk, the mosh ready beast On My Own and the anthem that started it all, Sobercoaster.

Beddy Rays, composed of vocalist, guitarist and Woppaburra descendent Jacko Van Issum, lead guitarist Lewy McKenna, bassist Brad O’Connor and drummer Benny Wade, have been on the rise for the past couple of years.  Their breakthrough anthem Sobercoaster landed at #54 on the triple j hottest 100, racked up over 3.5 million streams and has seen the band continue on a ballistic trajectory ever since.  The four-piece have gained multiple nominations at both the Queensland Music Awards and National Indigenous Music Awards, were announced as winners of the Levi’s Music Prize in 2021 and rocked their cover of Thelma Plum’s Better in Blak for triple j’s Like A Version.

Beddy Rays have annihilated festival sets at Valley Fiesta, Summer Sounds, Play on the Plains, Super Fun Day, ShoreShocked, The Push, Spin Off and will take the stage at Spilt Milk and Falls Festival later this year.

The band will make a series of record store appearances and performances across the east coast of Australia, signing copies of their new album Beddy Rays in Brisbane, Byron Bay, Newcastle, Sydney, Wollongong and Melbourne.  More details can be found below.

With special guests TOWNS and Bakers Eddy
Presented by Select Music and Artists Only
Tickets on sale now via www.beddyrays.com