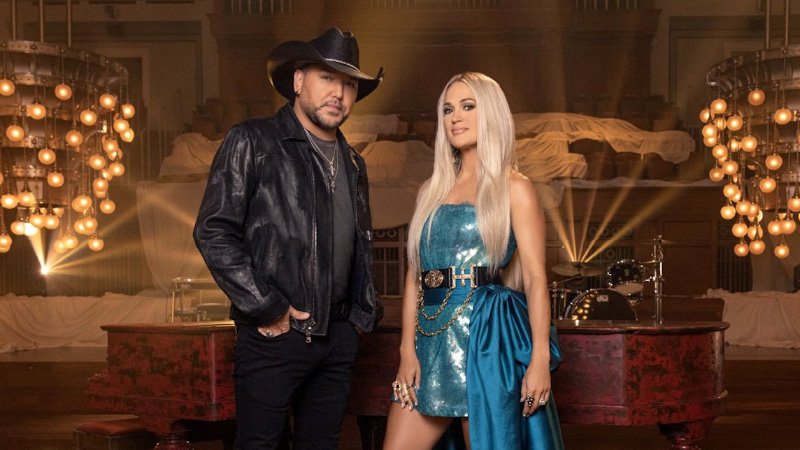 NASHVILLE, TN. / LONDON, UK. – (Sept 9th, 2021) – The official music video for multi-Platinum entertainer Jason Aldean‘s heart-pounding duet with seven-time Grammy award winner Carrie Underwood, ‘If I Didn’t Love You’, premiered last night across Facebook and YouTube. “The soaring, heart-torn anthem” (American Songwriter) and US Country Radio Top 10 climbing hit serves as the lead single from Aldean’s forthcoming 10th studio album, and made the highest debut upon release as a solo male/female duet since the inception of the Billboard Hot Country charts. It is available on all digital platforms here.

“Carrie was made for this song, but also for this video,” said Aldean. “I’m glad that she was down to get together to make it…it’s something that turned out  a little outside of what I’d normally do, which is always cool.”

Watch the video behind the “tear-in-your-beer ballad” (Billboard) ‘If I Didn’t Love You’: https://jasonaldean.lnk.to/ifididntloveyouvid.

The music video for the “powerful new duet” (Rolling Stone) was directed by Shaun Silva and filmed at Nashville’s Schermerhorn Symphony Center as Aldean and Underwood capture the tension of an unresolved relationship. ‘If I Didn’t Love You’ was produced by Aldean’s longtime friend and collaborator Michael Knox, and written by his bandmates Kurt Allison and Tully Kennedy alongside Lydia Vaughan and John Morgan.

ABOUT JASON ALDEAN:
The three-time ACM “Entertainer of the Year” continues to hold his ground making modern albums with an old-school soul while bolstering 25 No. One hits, 15 billion streams and more than 20 million albums sold. Notably, seven of Aldean’s previous studio albums have been certified Platinum or more and he has the most Top 10 song on Billboard’s Hot Country Songs chart, more than any other artists, since making his chart debut in 2005. He recently launched his latest collaboration, Wolf Moon Bourbon, an 80 proof bourbon that has been distilled from Midwestern grains and aged for four years offering a finish of caramel, oak and spice. Aldean continues to trek nationwide with his Back In The Saddle Tour 2021 featuring special guests HARDY, Lainey Wilson, John Morgan and Dee Jay Silver. For more information, visit www.JasonAldean.com.

ABOUT CARRIE UNDERWOOD:
Carrie Underwood has sold more than 64 million records worldwide, recorded 27 #1 singles (14 of which she co-wrote), and has seven albums that are certified Platinum or Multi-Platinum by the RIAA.  She has won over 100 major awards including 7 GRAMMY® Awards, 15 ACM Awards including three for Entertainer of the Year, 23 CMT Music Awards, 7 CMA Awards, and 15 American Music Awards. She recently announced her first-ever residency, REFLECTION: The Las Vegas Residency, at The Theatre at Resorts World Las Vegas, which will begin December 1st. For more information, visit www.carrieunderwoodofficial.com.