Rock ‘N’ Load Caught Up With Mark To Hear About This Crazy Journey, All For His Little Girl.

Mark Tremonti in Frank Sinatra’s Dressing Room
Photo Credit: Chuck Brueckmann
GRAMMY® winning musician, producer, author as well as founding member of chart-topping, globally successful rock bands Alter Bridge, Creed, and Tremonti, Mark Tremonti is “stepping out” with his most-ambitious and challenging project to date.
Announced today, March 21st, on World Down Syndrome Day, Mark has partnered with National Down Syndrome Society (NDSS) as he releases an album of Frank Sinatra covers entitled Tremonti Sings Sinatra. The album of selections from Frank Sinatra’s catalogue is being released as part of a new charity initiative created by Tremonti called Take A Chance For Charity. Proceeds from the album – scheduled for release on May 27th – will go to support NDSS and the work they do to advocate for and support individuals with Down syndrome and their families. Mark and his family were blessed to welcome their first daughter Stella last March – who was born with Down syndrome – and the idea for the project was born. A video sharing the very personal story of Take A Chance For Charity and behind-the-scenes clips can be seen here: https://youtu.be/7FroQm-63RI.
“For years, I’ve loved singing along to Frank’s songs,” Mark explains. “One night, I found an old video of him performing ‘The Song Is You’ from 1944. It made me want to dive into his vocal approach. I was all in and I wanted to do something with it. When we found out about our daughter Stella’s Down syndrome diagnosis, the stars aligned. My obsession with Sinatra had its reason. Frank Sinatra raised more than a billion dollars for charity and that is a fact I wish the public knew more about. Beneath his cool and calm persona, he had a big heart. Doing this charity in his name was another way the stars had aligned. I decided to do this record to raise funds for families and individuals with Down syndrome. This project is the start of a new purpose that I will have for the rest of my life.”
With supportive guidance from the Sinatra family, Mark Tremonti has come together with surviving members of Frank Sinatra’s orchestra, creating new takes on both classics and deeper cuts from Frank’s catalogue. From the opening horns and piano of “I’ve Got You Under My Skin” to final vocal outro of “All Or Nothing At All,” Mark Tremonti showcases the signature vocal approach and exemplary musicianship that made Sinatra’s work timeless. To see his vision through, Mark reached out to Frank Sinatra’s musical director Mike Smith who collected as many remaining members as possible of Frank’s touring band to record the music for Tremonti Sings Sinatra. Where sadly, some members have passed away, the orchestra was completed by a cast of stellar musicians, between them known for playing with Aretha Franklin, Stevie Wonder, Ray Charles, Lady Gaga, Count Basie, Buddy Rich, Barbra Streisand, Dizzy Gillespie, and more. The album was recorded at Chicago’s Palisade Studios and Crystall Recorders, with arrangements from Mike Smith and Carey Deadman.
Popular standards like “I’ve Got The World On A String,” “My Way” and “That’s Life” find new life in the hands of these incredible musicians. Mark Tremonti – known for his guitar work that has won him countless accolades – leaves the instrument behind and just sings on the 14-track album. The artwork on the album cover is an original painting that Mark Tremonti created especially for this project.
“I’ve Got You Under My Skin”
Tremonti Sings Sinatra is now available for pre-order at: https://linktr.ee/marktremonti.
The tracklisting for Tremonti Sings Sinatra is:
1.  I’ve Got You Under My Skin
2.   I’ve Got The World On A String
3.   I Fall In Love Too Easily
4.   Wave
5.   Fly Me To The Moon
6.   Nancy (With The Laughing Face)
7.   My Way
8.   You Make Me Feel So Young
9.   Luck Be A Lady
10. That’s Life
11. Come Fly With Me
12. In The Wee Small Hours Of The Morning
13. The Song Is You
14. All Or Nothing At All 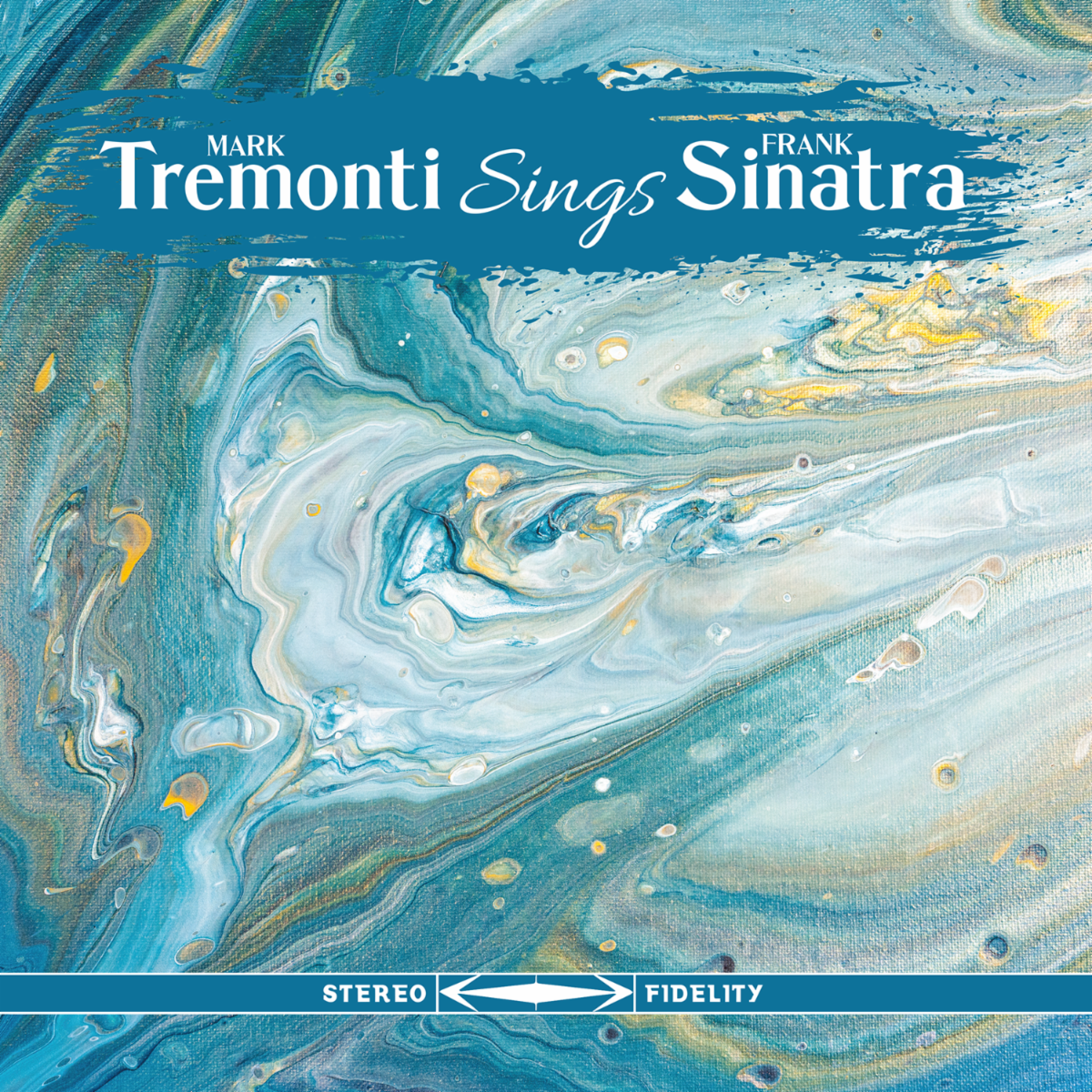 About Take A Chance For Charity:
Take A Chance For Charity is a new charity focused on giving artists / actors / athletes / anyone with a platform the ability to get out of their comfort zone. The idea is to have people get out of the genre they are known for to raise funds / awareness for the charity of their choice. We want people to have the most fun they ever had while raising money for charity. An actor can sing, an athlete can dance, a musician can perform a song out of their musical genre – any artistic interpretation. This gives participants the ability to do something out of the ordinary – in fact extraordinary – all in the name of charity. Tremonti Sings Sinatra will be the first release for the cause, the recipient being NDSS.
About NDSS:
The National Down Syndrome Society (NDSS) is the leading human rights organisation for all individuals with Down syndrome. NDSS envisions a world in which all people with Down syndrome have the opportunity to enhance their quality of life, realise their life aspirations, and become valued members of welcoming communities. Founded in 1979, NDSS supports and advocates for the Down syndrome community by focusing on three key areas of programming: Resources & Support, Policy & Advocacy, and Community Engagement. Within these focus areas NDSS engages in various activities, events, and programs on topics that are critical to our community such as federal and state advocacy and public policy, health and wellness, education, and employment. NDSS creates resources to support individuals with Down syndrome, their families, and caregivers across the lifespan and hosts awareness and engagement events throughout the country including the National Buddy Walk® Program, the Times Square Video presentation and New York City Buddy Walk®, Racing for 3.21 on World Down Syndrome Day, Run for 3.21, DC Golf Outing, the annual NDSS Gala & Auction, and various other events. Visit www.ndss.org for more information about NDSS.
Some quotes about Tremonti Sings Sinatra:
“Mark did a fantastic job on this record, his voice and take on the tunes are amazing!” – Hank Cattaneo (Frank Sinatra – Duets Producer)
“Mark’s take on Sinatra is nothing short of uncanny. I could never have expected one of my fave metal guitarists to do such faithful renditions of Sinatra classics. Not only instrumentally, but vocally! & these recordings are for a cause near & dear to my heart; I was very close to an uncle who had Down Syndrome when I was growing up. I fully appreciate & support Mark’s commitment to NDSS.” – Slash (Guns N Roses)
“Holy Shit, I knew Mark was a ripping guitar player, but no way did I ever have a notion that he had golden pipes as well!!! Totally blown away, totally into it, let’s hear more Mark!!!” – Kirk Hammett (Metallica)
“When Mark first played me a track from this project my jaw dropped. Gave me chills! This is a side of Mark’s voice that people need to hear and I’m certain they will be just as blown away as I was.” – Chris Daughtry (Daughtry)
“Wow! I am absolutely blown away by Mark’s performance on this album!! He delivers the songs authentically, embodying all that is Frank but giving us a glimpse of his own personality as well. I love the arrangements and the fact that some of Frank’s original band members contributed to these tracks. Honestly, I’ve known Mark for a long time and know he is super talented but had no idea he was capable of channelling Old’ Blue Eyes like that! Just absolutely beautifully done and what makes everything even that much more touching is the cause. I bet Mark’s daughter Stella was in his heart during every step of the recording processes. Incredible!” – John Petrucci (Dream Theater)
“Once again Mark Tremonti never ceases to amaze me. These renditions of some of the most beloved Sinatra tunes, are so eloquently done that it is remarkable. And what a beautiful gift to the NDSS. Much love, respect, and success to this incredible project”. – Brent Smith (Shinedown)
Official Website:
www.tremontisingssinatra.com
www.marktremonti.com