Moog Music’s Etherwave Theremin Is Back

Moog Music’s Etherwave Theremin Is Back

Own a piece of music history with Moog’s newest instrument: Etherwave Theremin. Based on the company’s original Etherwave circuitry and aesthetic, designed by Bob Moog himself in 1996, this evolution of the instrument delivers improved precision, portability, and playability for the professional thereminist or curious newcomer. 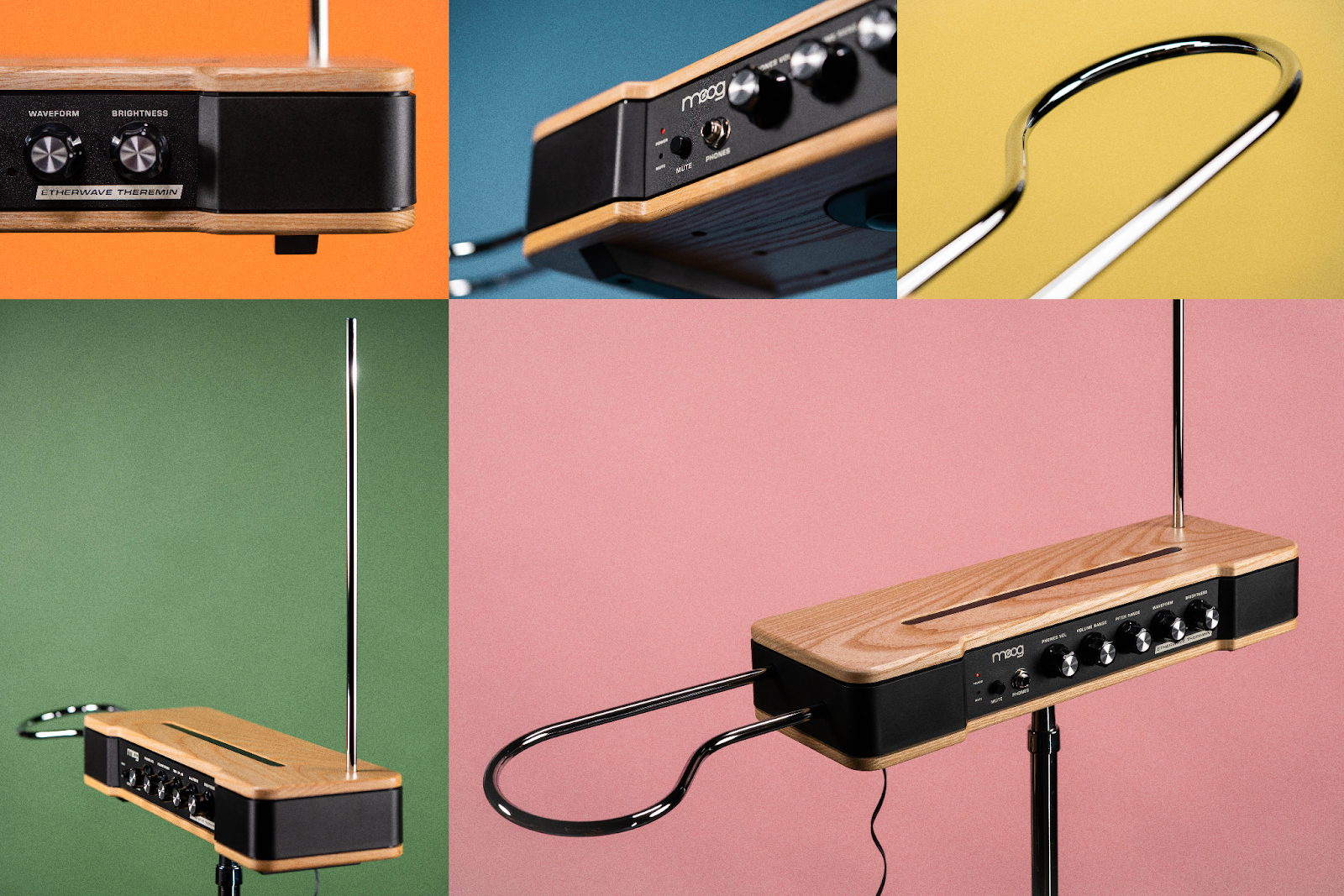 For over 60 years, Moog theremins have captured the imagination of players and audiences alike. Most recently over the last two and a half decades, Moog’s Etherwave Standard and Etherwave Plus have set the bar for performance theremin design. Now, the all-time highest-selling theremin models get an update to become simply Etherwave Theremin.
The only musical instrument that is played without touching, the theremin is controlled by moving one’s hands in the air in the proximity of two metal antennas: one exists to determine pitch and the other determines the volume. Higher notes are played by moving the hand closer to the pitch antenna, while louder notes are played by moving the hand away from the volume antenna. Throughout history, performers have achieved unprecedented expression by mastering this unique connection between the hands, the body, the environment, and the instrument.
The theremin’s elegant simplicity and inherently expressive nature caught the attention of Bob Moog, founder of Moog Music and inventor of the Moog modular synthesizer, at an early age. His lifelong love affair with the instrument began with the build of his first theremin at age 14 and concluded with his final theremin design: the original Etherwave. Today, the legacy of the Moog theremin continues inside the employee-owned company’s Asheville, North Carolina factory with the hand-built production of Etherwave Theremin.

The Evolution of the Etherwave Theremin

The new Etherwave Theremin focuses on the preservation of Bob Moog’s legendary theremin circuits to retain all the charm and character that made its predecessors so unique and sought after, while adding a host of new benefits:
Plus, Moog has developed a custom-fit, tear-resistant Etherwave SR Series Case with generous padding and plenty of storage for safe and convenient transport of the instrument. Designed with artists for artists, these cases have been developed specifically for the touring musician.
For the novice enthusiast or the seasoned professional player, Etherwave Theremin carries on the Etherwave legacy with a design that is refined for the modern thereminist. To learn more about the new Etherwave Theremin, click here.
Find a Moog authorized Etherwave Theremin dealer near you.
For all media inquiries contact:
SiouxZ@magnumpr.net
SUPPORTING CREATIVE CONTENT 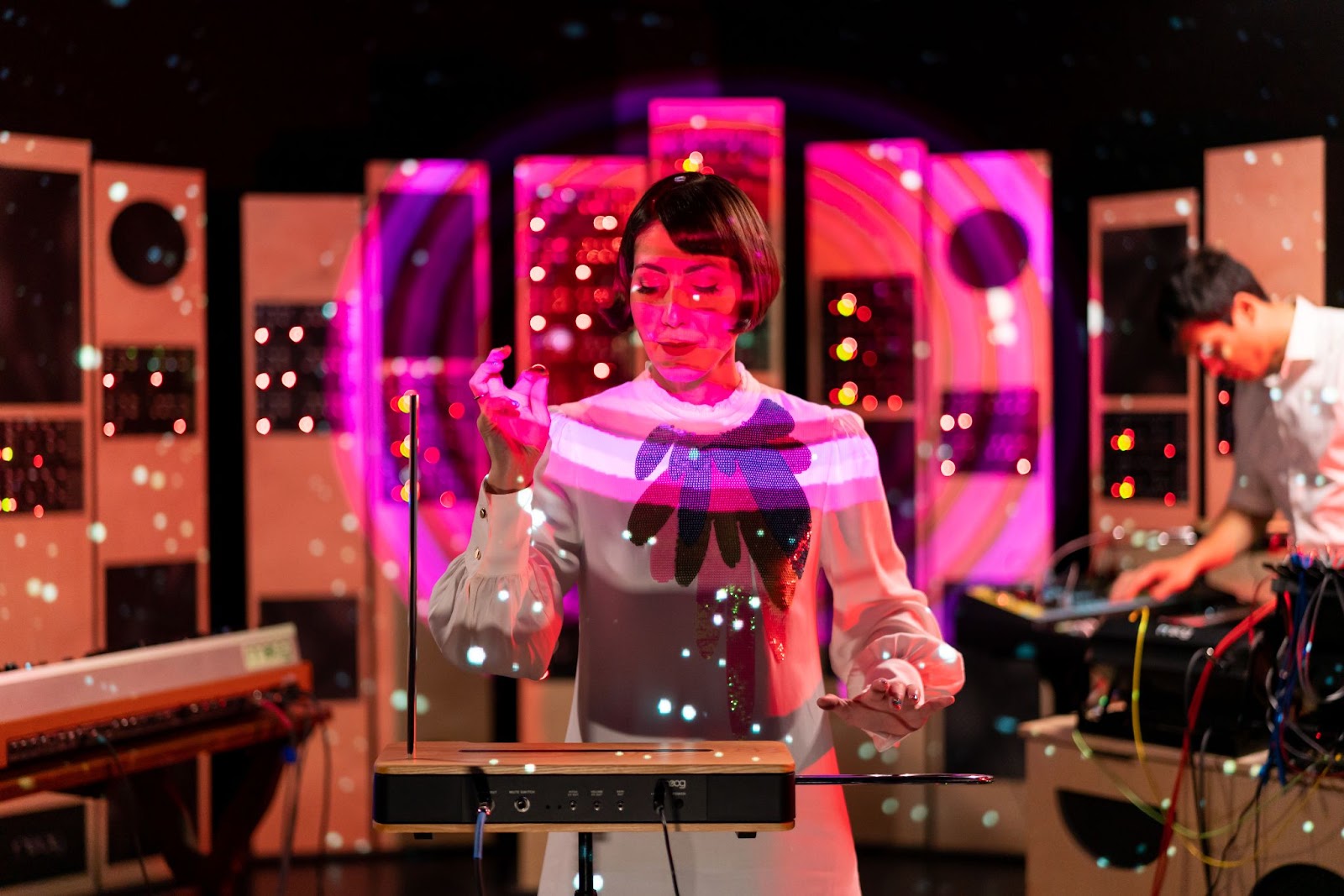 The Octopus Project performs their 2007 track “I Saw the Bright Shinies” using the new Etherwave Theremin. Filmed in the Moog Sound Lab, the Austin-based electronica group uses a variety of vintage and modern Moog synthesizers, in addition to employing Etherwave as both a lead instrument and a CV controller for Moog’s paraphonic semi-modular analog synthesizer, Matriarch. Watch the performance here. This new EP, composed and performed by French thereminist Grégoire Blanc, showcases Etherwave Theremin’s ability to span a wide range of styles and genres.
“This little four-track album is the result of some very spontaneous improvisations. Four short electronic pieces where the new Etherwave Theremin is, of course, the main character. Choosing the other protagonists was quite natural: Matriarch, DFAM, Subharmonicon, Mother-32,” the electronic musician shares. “Making all these lovely instruments talk to each other was a lot of fun.”
For Blanc, it’s the “immediate joyful feeling” of experimenting with Etherwave and the semi-modular family together that brings this playful and lively EP to life.
Lost in the Ether is now free to stream on Moog’s SoundCloud. 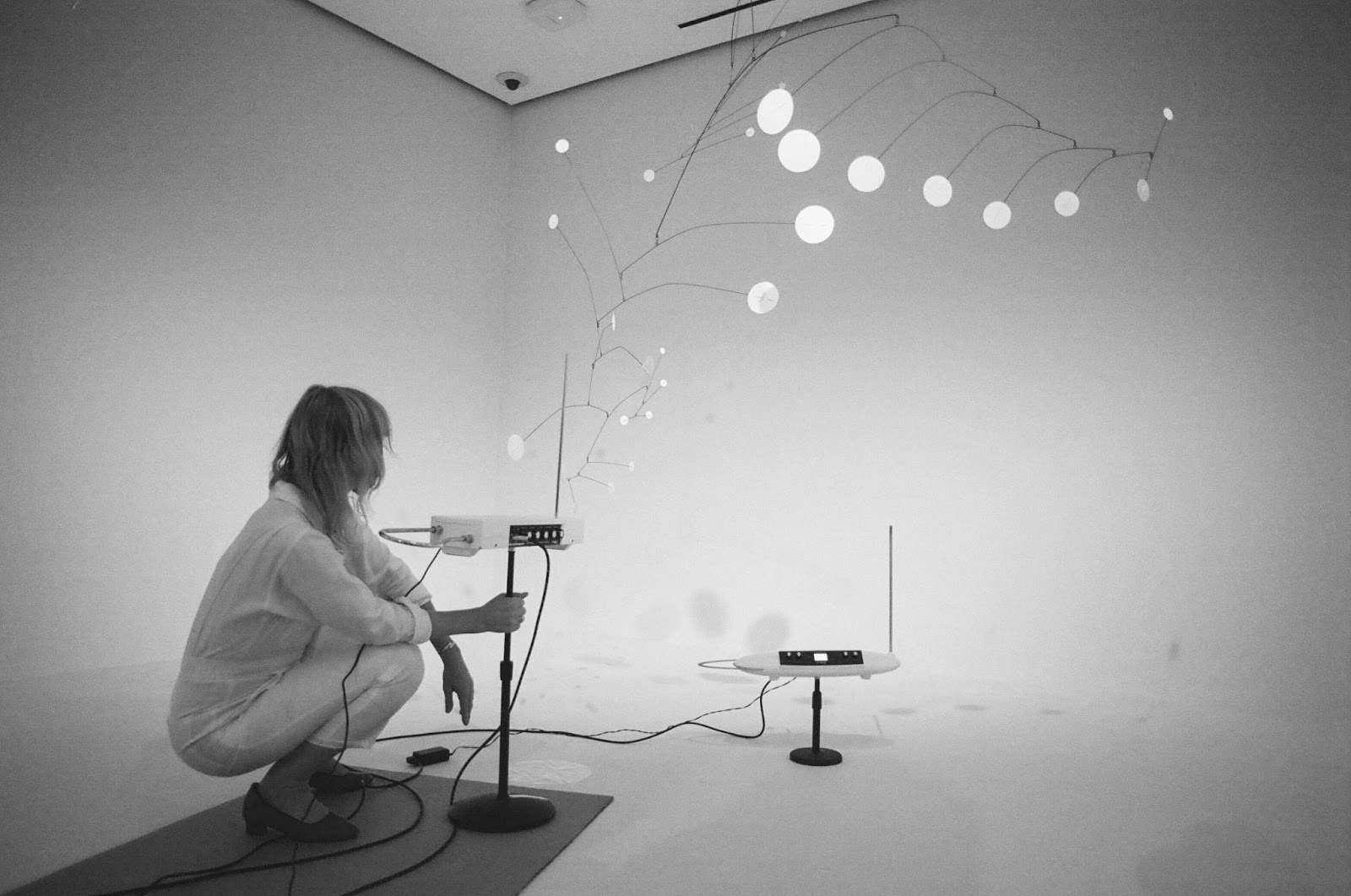 Photo Credit: Jake Marsiglia
Moog Music and Berlin-based thereminist Dorit Chrysler are teaming up to offer a unique experience for registered Etherwave Theremin owners: a series of interactive online theremin workshops that will be offered on a regular basis for new players and thereminists of all levels.
Through her organization, the NY Theremin Society, Dorit has helped adults and children learn to play the instrument through in-person classes, online sessions, instructional videos, and more.
SUPPLEMENTAL AND OPTIONAL INFORMATION ABOUT THE HISTORY OF THE THEREMIN AND BOB MOOG’S INVOLVEMENT WITH THE INSTRUMENT

More about the Theremin: History & How It Works

How Exactly Does the Theremin Work?

While the theremin is the only instrument that can be played without physical contact, making it sound musical requires control and precision.
The theremin is controlled by moving one’s hands in the air in the proximity of two metal antennas: one exists to determine pitch and the other determines volume. Higher notes are played by moving the hand closer to the pitch antenna, while louder notes are played by moving the hand away from the volume antenna.
“The brilliance of this technology is that Leon Theremin determined that if you have an electrical field around [the pitch] antenna and it’s connected to a circuit, and you have an electrical field around [the volume] antenna connected to another circuit, then by bringing your hands near these electrical fields you are actually altering these electrical fields in such a way that it affects the circuits,” award-winning author and composer Albert Glinsky describes. “These circuits eventually go to something that is going to produce an analog sound that comes out of a speaker, and you will hear it.”
The theremin produces a tone close to a sine wave. It is a monophonic instrument, meaning it plays one tone at a time (unless it is used as a MIDI controller). Originally imagined to accompany or replace orchestral instruments like the violin and cello, the theremin has stood on its own and continues to stand the test of time.

In 1949, a teenager by the name of Bob Moog first learned of the theremin in an issue of Electronics World, and shortly after built his first model of the instrument from plans published in the magazine. By 1954, when he was just 19 years old, he and his father were building and selling theremins out of their home in Queens, NY.
Moog was enamored with the technology and became so dedicated to his craft that it caught the attention of Radio & Television News, which featured Moog’s “The Theremin” article in the magazine’s January 1954 issue. “The Theremin” provided readers with a new schematic for a theremin design that offered greater operational stability while remaining simple enough to build at home. Having recently founded R.A. Moog Company to market and sell his theremin kits, Moog took out an advertisement in the same issue, offering readers the opportunity to purchase all the parts needed to build the instrument described in his article.
“I became a designer of electronic musical instruments because of my fascination with the theremin,” Moog wrote in his foreword to Albert Glinsky’s Theremin: Ether Music and Espionage, the definitive biography of Leon Theremin. “Using the experience and insights I gained by designing theremins, I started designing and building synthesizers.” The rest, as they say, is synth history.
Along with classical applications from professional musicians like Clara Rockmore, the theremin has made its mark on popular culture through film scores, television references, and more. The instrument was used to create otherworldly audio effects in mid-century films such as The Day the Earth Stood Still and Alfred Hitchcock’s Spellbound, was used by Led Zeppelin, and provided the sounds that would accompany Neil Armstrong on the first trip to the Moon.