(THE MINDS THAT BROUGHT YOU 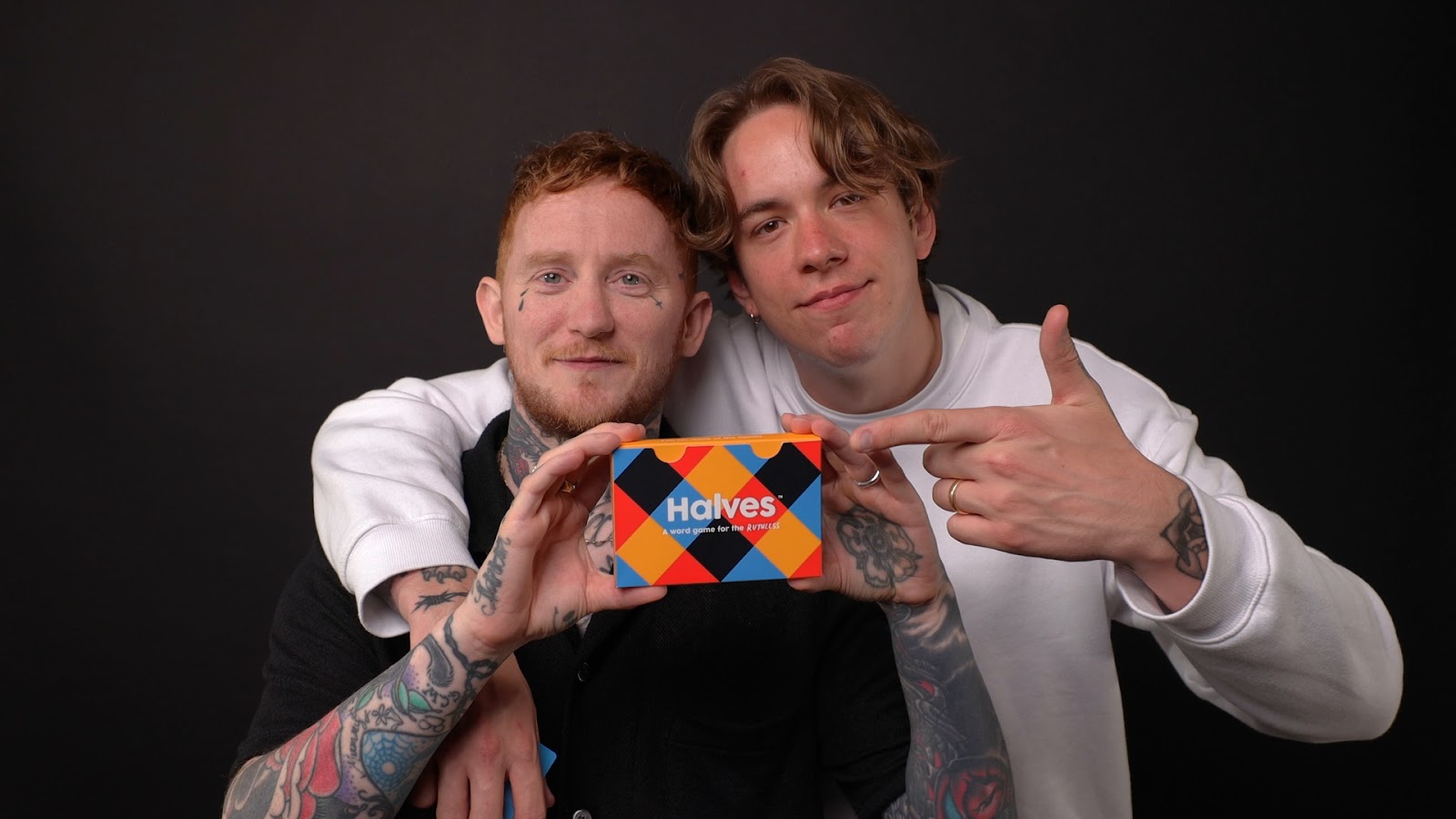 What is Halves? Use your superior intellect to win points by guessing the word on your opponent’s card and stopping them from guessing yours. However, if you can’t win with words, then win with wickedness! Use an arsenal of Trap cards specifically designed to deceive, disrupt and derail your opponents. The player who’s managed to accrue the most points at the end of each round is the winner. Unfun for all the family, the game is suitable for ages 7 and over. For more information visit halvesgame.com.

Dreamt up on a plane to Ireland during The Rattlesnakes’ first ever tour in 2016, Frank Carter and Dean Richardson have been developing Halves ever since, steadily perfecting it alongside releasing their four critically acclaimed albums, touring the world as headliners and supporting Foo Fighters and Biffy Clyro, Dean’s work as a graphic designer for the likes of Nick Cave, the Minions movies and Gorillaz, Frank’s tattoo shop Rose of Mercy, and a host of other creative projects.

“We sat next to each other on the plane and by the time we landed, we had drawn most of what the game is now. So then we went into WHSmiths at the airport, bought a deck of actual cards, some kids coloured stickers and a Sharpie, and just got full tunnel vision. I would say 90 percent of what is in the game now came from that one flight, which is quite a common thing for mine and Frank’s partnership. There’s these moments where a lot comes, and then a lot longer trying to piece that into something that can be put out into the world,” Dean explains.

Six years, four prototypes and hundreds of games later and Halves is ready to play. The month-long campaign launches today on Kickstarter to raise the £15,000 needed to bring it to market. Making a contribution to the campaign unlocks a variety of rewards and exclusive content, full details of which can be found here.

Speaking on the project, Frank says: “Halves has been a labour of love for the past 6 years. We conceived the idea of the game on a flight when we were touring and as soon as we made the first prototype we fell in love with the way the game played.

“To finally release it on Kickstarter is an absolute dream; I would love to hit our goal early and get things moving with production. We love the game and can’t wait to hear what everyone thinks of it.”

Who are Carter & Richardson? Best known as the minds behind punk rock heroes Frank Carter & The Rattlesnakes, Frank Carter and Dean Richardson are a creative duo whose work spans graphic design, tattooing, NFTs, music and more. They first connected when Frank tattooed Dean, with Dean then returning the favour, his company Yuck designing the artwork and merch for Frank’s band Pure Love. The partnership was well and truly formed by the time the friends decided to combine forces for what is now one of British Punk’s best loved bands, for whom the pair design all their own assets and merch, and has continued with a plethora of projects that’s included the release of their own eco-friendly NFT last year, their label International Death Cult, and now Halves.

“It was design and tattooing that brought us together, so that creativity is so integral to all our work. Our biggest challenge is probably limiting how big the ideas get; that seems to be what gets in the way,” Dean explains. “But of all the ideas, we knew as soon as we played Halves that we had to get it out into the world.” 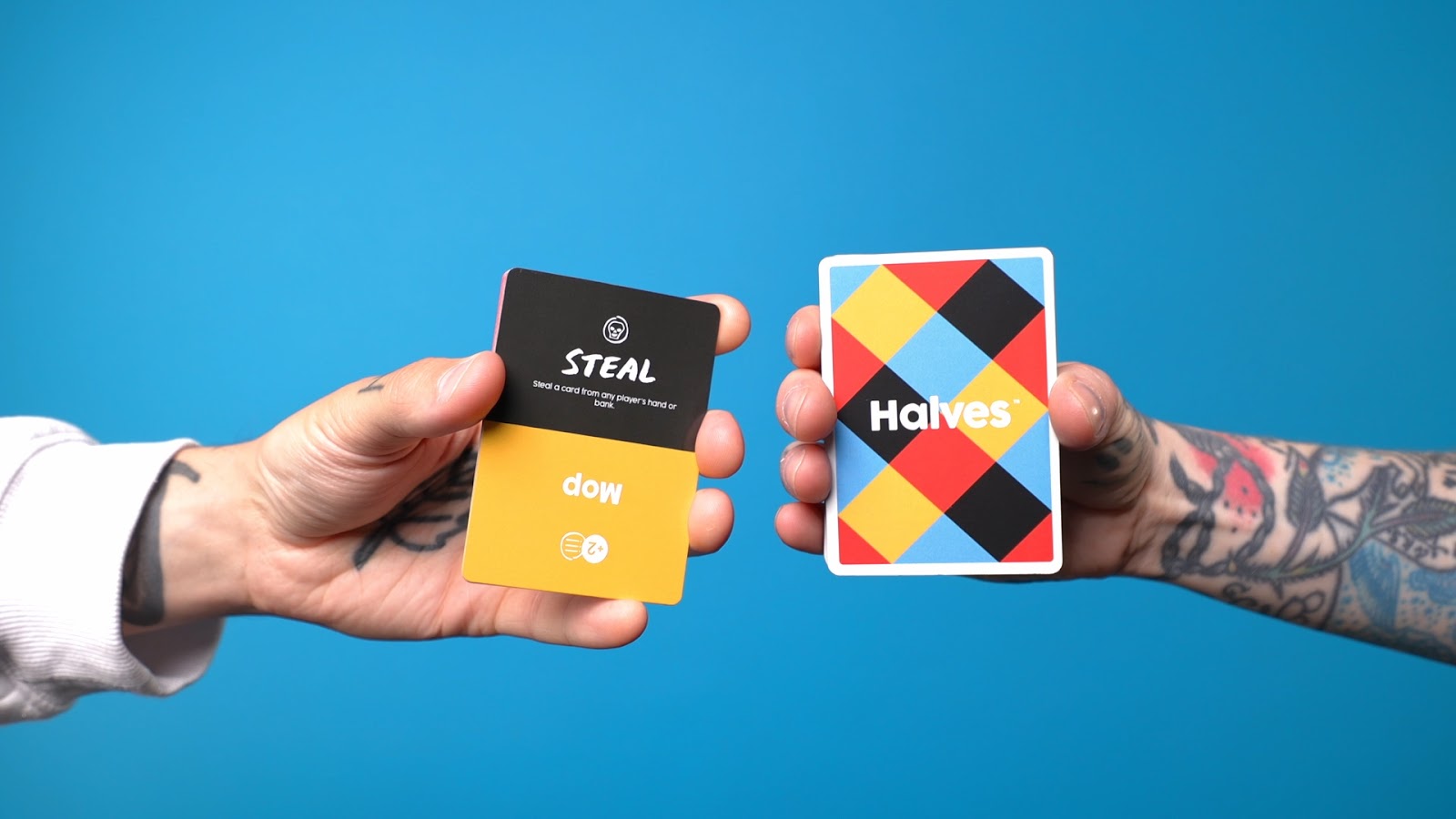