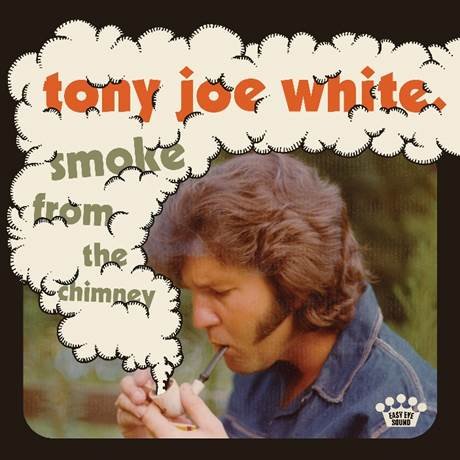 7 May, 2021 – Nashville, TN – “No-one else could do it like Tony Joe does,” says The Black Keys and Easy Eye Sound founder, Dan Auerbach. “When is the last song you heard name check Red Man and Gatorade?” With a legion of passionate, cult-like fans, a new expansion of Tony Joe White’s catalog was much welcomed—especially from Auerbach, who produced the newly-released Smoke from the Chimney; a nine-song album of never-before-heard tunes culled from White’s unused, unadorned voice and guitar demos. Rounded out by Nashville’s most seasoned studio musicians and released on Auerbach’s Easy Eye Sound label, Smoke from the Chimney transforms those home-studio tracks into full band arrangements harkening back to the albums White recorded in the late 60s and early 70s in Nashville and Muscle Shoals—just as he was emerging as an internationally recognized songwriter and recording artist. Fans can read more about Smoke from the Chimney below, purchase or stream the album now right here, and watch the official videos for “Boot Money,” “Bubba Jones,” and “Smoke from the Chimney” at their respective links.

Praise for Smoke from the Chimney:

NPR invited Auerbach to World Cafe to discuss the process of making a record from White’s unreleased demos, noting, “For Tony Joe fans, these songs and the stories they tell, are some of his best. It’s hard to conceive that these were songs that didn’t make it on previous albums.”

Garden & Gun spoke with Auerbach about how Smoke from the Chimney came together and premiered the album’s title track. About White’s signature swagger, they said, “It’s the kind of sound capable of converting casual listeners into superfans, even when those listeners happen to be Grammy-winning musicians themselves.”

More About Smoke from the Chimney: Ever since meeting Tony Joe backstage at an Australian music festival in 2009, Auerbach sought to make a record with him. For nearly a decade, White’s son Jody tried to line up session time for them but Tony Joe demurred. “For one reason or another, my Dad would never just want to go into a studio and write with somebody, or go work with somebody,” Jody says. “He liked to do it at his place, and his way, and it turned out how it turned out, you know what I mean? So, this album really all worked out perfectly. He was making these tracks for Dan all along, but we just didn’t know it.”

Auerbach agrees. “Jody and I had been talking about this record for so long, and it didn’t happen for a reason,” he says. “It’s because it wasn’t supposed to happen. I was in a nervous cast of characters until the last few years, and if you’d given it to me any earlier, it wouldn’t have been right. I felt like all these people on the record were the right people and they laid in there behind Tony Joe. It felt really magical when we were making it happen.”

“These songs feel like a collection to me and they all seem to work together, in a weird way, even though they’re so different,” says Auerbach. “There’s some heartbreaking ballads and some really raunchy carnal blues. But it all works together like scenes of a movie.” The cast of musical characters brought in by Auerbach to accompany White’s guitar and vocal recordings includes legendary keyboardist Bobby Wood (Elvis Presley, Dusty Springfield, Wilson Pickett), Nashville pedal steel ace Paul Franklin, next-generation guitar hero Marcus King, and Grammy and ACM award-winning fiddler Stuart Duncan, just to name a few.

Jody believes that his father would love the way Smoke From the Chimney turned out. “I feel like it’s validation that Tony Joe was one of the greatest of all time,” he says. “That he could make something so potent, even so late in life, is something that not many people can do. I think it’s going to make people who loved him already love him even more.”

Smoke from the Chimney Tracklist:

Smoke from the Chimney

Listen to Your Song