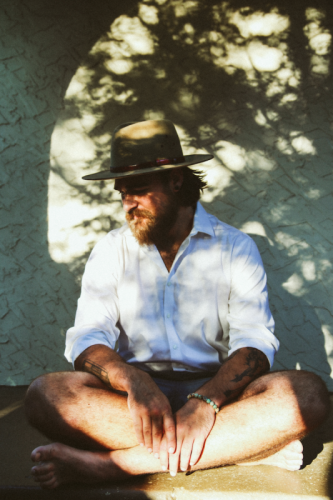 Above: “Time (Done Being Late)” Single Artwork
NASHVILLE, TN (August 2, 2021) — The Wonderfool—the recording project of singer-songwriter, multi-instrumentalist, and producer Matt Vinson—has released the sophomore single, “Time (Done Being Late),” from his forthcoming Shiner album. The song marks the second offering from The Wonderfool’s forthcoming full-length studio album, Shiner, that’s due out Wednesday, August 11 via Gjenny Records. The song is a nod to nostalgia while looking ahead at the future.
Click here to listen to “Time (Done Being Late).”
“Time is an ode to every human that has shaped me into the person I am today,” says Vinson who is also notably one third of the chart-topping folk group CAAMP. “It’s a celebration of friends, family and love. I hope the song reminds you to keep moving forward, though always reminiscing on loved ones and cherished memories from the past.”
The nine-track Shiner is a soundtrack for early mornings and late nights mixing the organic with the synthesized, the intimate with the collaborative, and folky with the pop-inspired. Vinson was stuck indoors by the pandemic after the band had to cancel their touring plans. Vinson found himself with ample time on his hands and turned that isolation into an opportunity to create something new: a combination of modern folk melodies, forward-thinking production, and lyrics about fighting off one’s inner demons.
“The album has a blend of happy, poppy songs that are filled with themes of personal betterment and moody songs with a sonic space that lets the emotion of the song ring true,” Vinson explains. “It’s something you can listen to in the morning, before you go to bed, or while sitting in a hammock. It’s reflective music. With Shiner, I finally encapsulated that feeling.”
Shiner Track Listing:
“Much Better”
“Time (Done Being Late)”
“Shake the Dust”
“Cool Shade”
“Counterweight”
“The Man You Knew”
“Truth of the Matter”
“Young & Able”
“The Day Before Your Last”
Vinson encapsulated The Wonderfool during 2015 while studying at Ohio University. From there he solely worked alone recording, producing, and writing. However, as Shiner took shape, the record proved to be something quite different, full of guest appearances from fellow road warriors (including CAAMP frontman Taylor Meier) and fueled by Vinson’s sharpest songwriting to date.