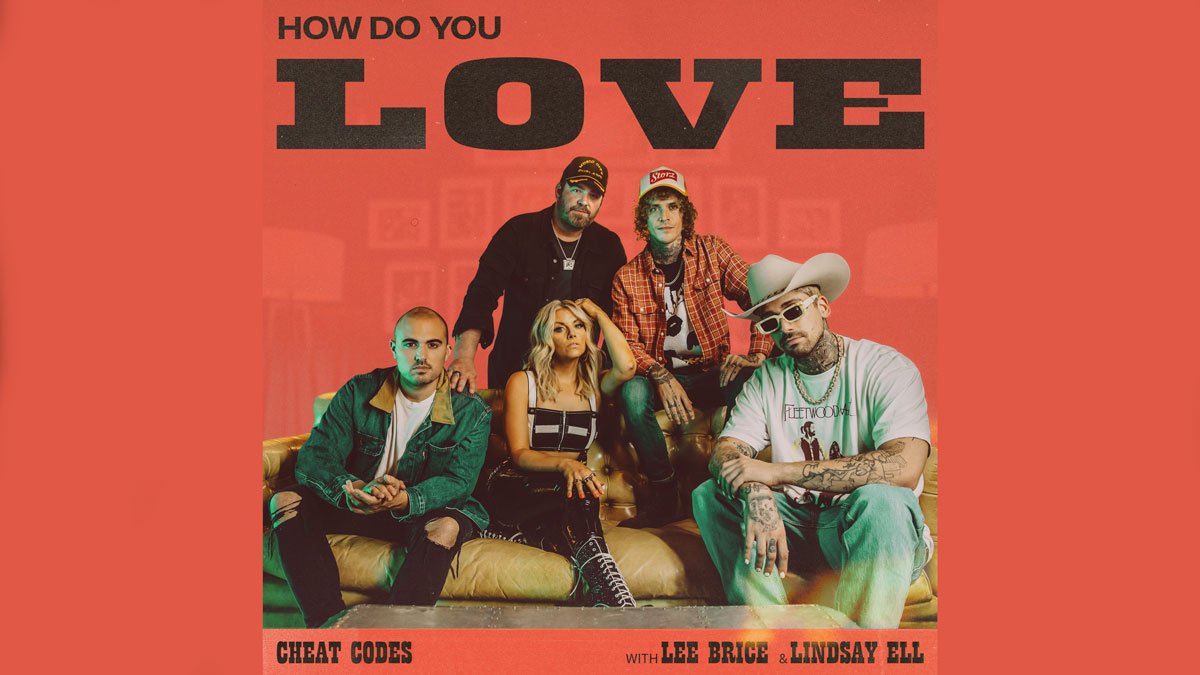 LISTEN TO THE SONG HERE / WATCH THE VIDEO HERE

Los Angeles, CA. / London, U.K. – (For immediate release) – Multi-platinum hit-making trio Cheat Codes, popularly known for their smash single “No Promises” (feat. Demi Lovato), are churning out new music at record pace in genre bending areas. Coming off the heels of releasing their highly anticipated album Hellraisers, PT 2. “How Do You Love” (featuring Lee Brice and Lindsay Ell) is the next title track and a follow up to their hugely popular single with Little Big Town that was released this past July.

Coming off their Country-Pop crossover single, “Never Love You Again” with Little Big Town and Bryn Christopher, the chart-topping artists are back to showcase yet another dimension of their musical talents with their newest collaboration. “How Do you Love” features vocals from Lee Brice and Lindsay Ell and is available now on all digital streaming services, found here.

“We flew down to Chicago with Lindsay Ell and surprised Lee Brice at one of his shows, which eventually became the official music video for the single. Lee Brice is a staple in the country community and knows how to make a heart swell so we couldn’t think of a better friend to take on the duet alongside Lindsay Ell. We hope you love this song as much as we did making it for you. The song has a special feeling of love and is something that’s relatable to everyone,” say The Cheat Codes. “Sometimes you’re head over heels and sometimes that special someone is right under your nose but you never realized why – what we’ve learned to understand is, love takes time and we hoped to capture that feeling with ‘How Do You Love’.”

Watch the music video for “How Do You Love” here

Cheat Codes released the first part of their debut album Hellraisers, Pt. 1 in May. The highly anticipated release featured tracks such as the lead single “Lean On Me (feat. Tinashe),” “Stay (feat. Bryce Vine),” “Do It All Over (feat. Marc E. Bassy),” and “Hate You + Love You (feat. AJ Mitchell).” The name of the album, “Hellraisers,” was the nickname given to the group by their late manager, Michael Theanne, who passed away over a year ago, describing their playful and adventurous lifestyle. The album itself has three parts – each part has a distinct sound influenced by each member. This first part is focused on Trevor’s pop-leaning sound, while the second part will be focused on KEVI’s hip-hop.  Hellraiser part 2 was relesed earlier this month to much anticipation with three key singles hitting the market in advance of the album.  The last single was Hurricane featuring Gray and Tyson Ritter.

Ever since Cheat Codes hit the scene they have hated the idea of being kept in a box of one genre. Always wanting to be able to experiment, push the envelope, and blur the lines between different types of musi, part two of the album did just that. They focused on where it all started for them as kids. POP PUNK. With songs featuring Travis Barker, Blackbear, Trippie Reed, Bring me to the Horizon and All Time Low.

ABOUT CHEAT CODES:
Simultaneously trafficking in electronic, pop, hip-hop, and alternative at the same high speed, the Los Angeles trio Cheat Codes remains an inescapable force throughout popular culture. Their total stream tally eclipses a staggering 6 billion plays. Maintaining a prolific pace, they’ve steadily amassed a diverse discography, including the platinum Pop Radio Top 5 smash “No Promises” [feat. Demi Lovato], the gold-certified “Feels Great” [feat. Fetty Wap & CVBZ], and gold-selling breakout “SEX” with Kriss Kross Amsterdam. Speaking to their international impact, “Only You” [feat. Little Mix] soared to #1 on Pop Radio in the UK, while they received dozens of platinum certifications in 20 countries. Not to mention, Liam Payne, Kim Petras, Wiz Khalifa, and Sofía Reyes all jumped at the chance to collabo on rate, and they did remixes for Ed Sheeran and Sam Smith. Igniting clubs worldwide, their 2019 level 2 EP yielded the #1 Dance Radio hit “Who’s Got Your Love” [feat. Daniel Blume] in addition to “Ferrari” [feat. Afrojack] and “Be The One” [feat. Kaskade]. Cheat Codes made their acting debut with the Bella Thorne directed short film, music video for “No Service In The Hills” featuring Trippie Redd, blackbear and PRINCE$$ ROSIE. Acclaimed by Rolling Stone, Paper, Time, Billboard, and more, the musicians have shut down The Tonight Show Starring Jimmy Fallon and Jimmy Kimmel LIVE! with stunning and show-stopping performances.

ABOUT LEE BRICE:
When Curb Records recording artist, Lee Brice, isn’t selling out arenas, writing and recording songs, or building new brands like American Born whiskey, you’ll find the family man with his wife Sara, two young boys, and daughter. Meanwhile, with 3 billion on-demand streams, and over 3.6 billion spins on Pandora, Brice continues to enjoy massive success at country radio, digital streaming services, and on the road. He recently reached #1 at Country Radio with “One of Them Girls,” which follows his #1 with Carly Pearce on “I Hope You’re Happy Now,” and his #1 just prior to that, “Rumor,” which was nominated in the category Single of The Year at the 55th Annual ACM Awards. One of the most-played country artists of all time on Pandora, he was the second country artist behind Keith Urban to receive the Pandora Billionaire plaque. Lee is also a GRAMMY nominee, a CMA and ACM award winner, and he’s taken eight radio singles to Number One: “A Woman Like You,” “Hard to Love,” “I Drive Your Truck,” “I Don’t Dance,” “Drinking Class,” “Rumor,” “I Hope You’re Happy Now,” and “One of Them Girls.” Garth Brooks, Jason Aldean, Kenny Chesney and others have recorded his songs, and he’s performed on numerous TV shows, including NBC’s Today, ABC’s The Bachelor, NBC’s The Voice and FOX’s Miss USA 2018. Lee performed as part of the Library of Congress Gershwin Prize for Popular Song honoring Garth Brooks, aired on PBS March of 2020. At the 54th Annual CMA Awards, Lee took home the prize for Musical Event of the Year for his song with Carly Pearce, “I Hope You’re Happy Now.” At the 56th ACM Awards, “I Hope You’re Happy Now” won Single of the Year and Music Event of the Year, and Lee and Carly Pearce performed the song live. Lee’s radio single, “Memory I Don’t Mess With,” from his album, Hey World, is currently Top 10 at Country Radio. For more information, visit https://leebrice.com.

ABOUT LINDSAY ELL:
Lauded as “one of the most exciting and talented young artists in country music” (Forbes), Lindsay Ell is a triple threat: accomplished musician, unique vocalist and awe-inspiring songwriter. The Calgary native learned to play guitar while traveling with her father to country-bluegrass camps as a young girl. Ell honed her craft as a musical stylist and songwriter after being discovered by BTO and The Guess Who’s Randy Bachman (“American Woman” / “Taking Care of Business”) who discovered her at the age of 13. The multi-instrumentalist was soon touring alongside the likes of Luke Bryan, Buddy Guy, and Keith Urban. Ell also shared the stage with distinguished country group, Little Big Town, along with other powerhouse female artists in one the biggest moments of the 2019 CMA Awards where she was also nominated for Musical Event of the Year. Ell’s nominations do not stop there. She has been nominated for New Female Artist of the Year in both 2019 and 2020, in addition to her 2020 ACM nomination of Music Event of the Year. Ell is a 2-time CCMA Award winner (Interactive Artist or Group of the Year) who has recently stepped onto the stage as part of Keith Urban’s Graffiti U World Tour, Brantley Gilbert’s Not Like Us Tour, Brad Paisley’s Weekend Warrior World Tour and most recently Blake Shelton’s Friends & Heroes Tour and Dierks Bentley’s Beer’s On Me Tour. Ell’s first full-length album The Project debuted at No. 1 on the Country Album Sales Chart and was named Billboard’s “Best Country Album of 2017.” “What Happens In a Small Town,” Lindsay’s duet with Brantley Gilbert, claimed the top spot at country radio, marking her first No. 1 in the US. With two #1 singles under her belt in Canada, Lindsay earned the most 2021 CCMA Award nominations of any female — Female Artist of the Year, Interactive Artist or Group of the Year, Video of the Year and Songwriter(s) of the Year, with her career-changing sophomore album, heart theory, earning a coveted Album of the Year nomination.  heart theory was also nominated for Country Album of the Year at the 2021 JUNO Awards. For more information visit: www.LindsayEll.com.