ZAYDE WOLF RELEASES “MADNESS” + ANNOUNCES HIS
NEW ALBUM  NEON BLOOD TYPE
OUT MAY 7th
“ Neon Blood Type signifies everything that is unique within people and within Burnett. “
– American Songwriter
“Zayde’s driving and melodic vocals that are simple yet they work perfectly with the song as the instrumentation and music itself is not overly complicated….. “ Hard Beat Magazine
“Perhaps the perfect description of ZAYDE is simply the dark rock child of Imagine Dragons and The Black Keys.” – Ones to Watch
“ZAYDE WØLF has slowly but surely started to take over the world.” – Alternative Addiction
“Scrawling a poetic lyric on a massive pop-rock wall of sound–hinting at Imagine Dragons and Bastille influence–the creative (whose real name is Dustin Burnett) is owning this moment, with the release of his first full-length as a ferocious WØLF.” – Pop Dust
“a beautifully layered and theatrical slow-burn that builds with stirring harmonies and intense instrumentals. It has all the makings of a sci-fi or superhero blockbuster movie soundtrack.” –Forbes Magazine (on  “Oblivion: Reimagined” ) 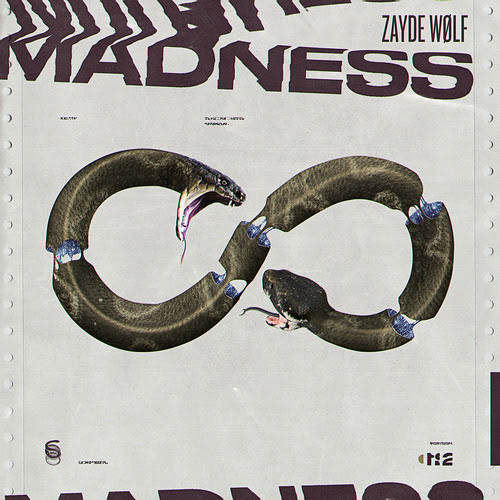 LISTEN TO “MADNESS”: HERE
Just in time for March Madness Nashville’s  Zayde Wølf is excited to release his single  “Madness” and announce his forthcoming album Neon Blood Type, which is due out on May 7th and is available for pre-order and pre-save today with the addition of two exclusive bonus tracks on the Apple pre-order. Dustin Burnett, the creative mastermind behind Zayde Wølf has always been drawn to shows and movies with dark storylines and broken-should-be-heroes. “Madness is somewhat of an internal monologue of myself,” says Burnett “and what I imagine these dark heroes would be faced with. If you put Kylo Ren, Jon Snow, and Batman in a blender, the sound it would make is ‘Madness.’”
This song follows up the powerhouse lead-off single ”Back At It,” released in January which has already hit 1 million streams. Neon Blood Type follows the 2018 release of Modern Alchemy, Wølf’s sophomore full-length album, which charted in over 25 countries on the iTunes charts and debuted in the top ten on the iTunes Alternative chart in the U.S. within hours of its release. Unintimidated by his past successes, Dustin Burnett (aka Zayde Wølf) has always been solely focused on making music that helps listeners to push through and overcome life’s challenges, trust that broken hearts eventually heal, and to remember that music is one of our most powerful tools for connecting us to one another. The thirteen tracks that makeup Neon Blood Type are no exception.  “Last year was really hard for a lot of us,” says Burnett. “ I wanted to channel all of that pain and frustration… all of that madness…and use it for fuel.”
This motivational mentality of transcending the past, and not allowing it to define who you will be, are not just concepts Burnett has embraced, but it’s how he has lived his life. Raised in Metropolis, a small town in Illinois best known for its fictional favorite son, Clark Kent, the level of success Burnett has achieved, both personally and professionally, is beyond anything he ever imagined or that was expected of him growing up. Zayde Wølf, which started as an experiment just under five years ago, has boomed into an empire of 241K YouTube subscribers, 87 million video views, over 1.3 Million monthly listeners on Spotify, with over 300 million streams across all streaming platforms.  This is on top of the hundreds of films, TV shows, trailers, commercials, and video games that have featured his music. The list includes the 2021 Superbowl, Shameless, Skyscraper movie, Love-Simon movie, the Jack Reacher 2, The Maze Runner 3, Pride Prejudice & Zombies, spots for UFC, MLB, NFL, Dodge, Jeep, WWE, Xbox, NBA, and more. In addition to syncs, Wølf has creatively expanded his reach by cultivating partnerships with brands such as Dude Perfect, one of the top YouTube sports channels with over 54 Million subscribers and 12 Billion views. Other creative partnerships include collaborations with Fortnite champion DrLupo, and extreme downhill racers Rémy Métailler and Matt Walker. Last year Burnett partnered with the NHL and  NBC sports for the Stanley Cup Finals where they used the Zayde Wølf track  “Home” in a spot featuring Burnett performing the song  HERE, and most recently was the featured celebrity guest on theGamer Hour where Burnett and Host Chris Puckett talked about their love for video games and went head to head live playing  Call of Duty Black Ops Cold War. “
NEON BLOOD TYPE   (OUT MAY 7th)
1.The Reason
2. Let’s Go
3. Back At It
4. Madness
5. Look at Me Now
6. Issa Vibe
7. Holy Water
8. Rumble
9. El Capitan
10. Never Fade
11. Feel Good
12. Brand New Thing
13. Still Fighting For It
KEEP UP WITH ZAYDE WØLF:
PR Materials: http://smarturl.it/ZaydeWolfPR
http://www.zaydewolf.com
https://www.facebook.com/zaydewolf
https://twitter.com/zaydewolf
https://www.instagram.com/zaydewolf
https://www.youtube.com/zaydewolf
https://soundcloud.com/zayde-wolf