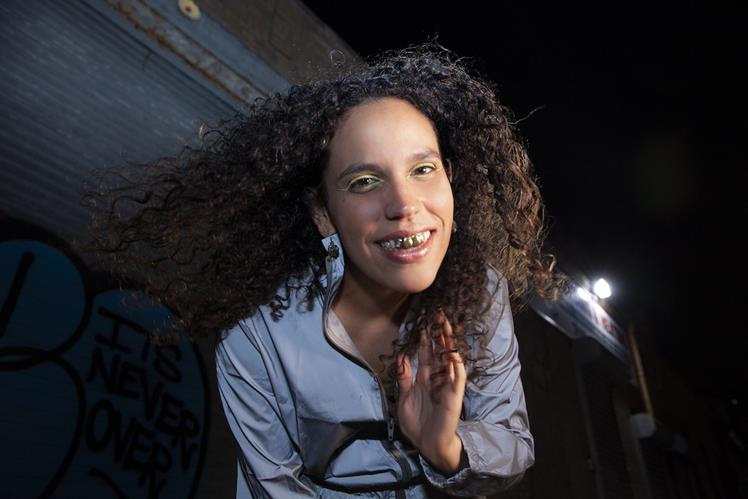 New York City artist Xenia Rubinos dips in and out of genre and structure to create movingly impactful music. Today she has done it again with “Who Shot Ya?”, a one-two punch of a song urgently calling for the listener to channel both their rage and power.

“I’m cheering on my fam to go and get it, whether that be get their rest, get their peace, get their money, get their justice — to get up and get it,” Xenia said of the song. “How many more times am I going to hear another man in power talk about what is best for the people, only to turn around and put children in cages and murder innocent people in their sleep? This perceived power is no action at all when their interests aren’t being served. The system is working as it was designed to and I’m trying to amplify some of that in my work. Borrowing from Cuban poet Jose Marti’s Versos Sencillos, she sings through a silvery autotune, ‘Soy de todas partes y a todas partes voy’ – I am from all places and to all places I go – an affirmation of the boundless power we possess.”

A collaboration with filmmaker Julia Pitch and choreographer Kate Watson Wallace, the song’s dynamic new video also explores the idea of cages – what we hold and carry in them. Watch it HERE.

“I was so lucky to collaborate with Kate Watson Wallace on choreography for my friends Xiomara Henry and Attis Clopton to perform — it was really emotional for all of us,” Rubinos said of making the video. “Connecting to our bodies can be a really transformative and healing practice, it’s like music. Movement can give voice to sensations that are otherwise indescribable.”

Rubinos’s powerhouse vocals stem from a combination of R&B, Hip-Hop and Jazz influences, all delivered with a soulful punk aura. Pitchfork has lauded her as “a unique new pop personality” while The New Yorker described her work as “rhythmically fierce, vocally generous music that slips through the net of any known genre.”

Earlier this year Rubinos collaborated with electronic visionary Helado Negro to create “I Fell in Love”, an ethereal love letter in songform. In November of last year, Rubinos released the double single “DIOSA” vs “BUGEISHA”, two new songs that  radiate feminine ferocity. Watch the colorful and lively video for “DIOSA” HERE and listen to the sparse yet powerful “BUGEISHA” HERE.

Two sides of a coin, DIOSA means goddess while BUGEISHA means warrior. “BUGEISHA” is inspired by the Onna Bugeisha, which were female fighters in Japanese culture who often took the place of their male counterparts. My track is inspired by the tale of onna bugeisha Nayako Takeko,” Xenia said. “I was so struck by her story and the portrait I found of her. It felt incredibly raw and powerful. I decided to keep the vocals sparse and try to evoke this kind of hypnotic, trance like moment when she is at the top of a hill about to go into battle and imagining herself succeeding. She is rooted like a tree and she has no fear, she feels a rush of adrenaline, a thrill at the sight of her enemy and a rush of power and trust in herself and in the honor of her family. Not even death could stop her from being fierce and powerful.”