What Lies Ahead of Us’ LP by Brazil’s PENTRAL Is Out Now! 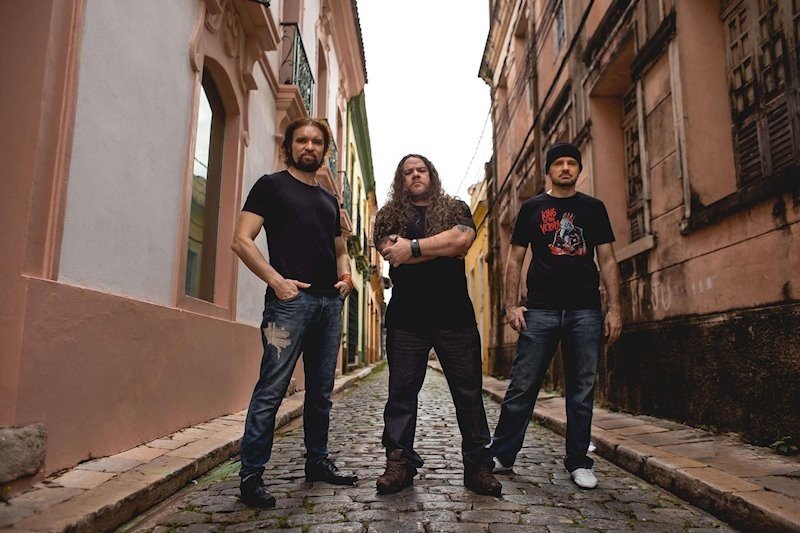 Photos by Diego Formiga and Andressa Sarmanho, except live photos by Cezar Moraes

“Quest for spiritual healing and dealing with the highs and lows of life and toxic people. It touches upon how hard is to cope with grief and loss and how rewarding it is to bounce back from rock bottom” ~ Prog Magazine

“Pentral take the listener into the Amazon, its beauty, punctuated with atmospheric sounds of nature pulled directly from the rainforest, through all the harsher elements, unveiled through the heavier deliverance of 12 pulsating tracks… There’s hope that What Lies Ahead of Us will open more eyes to the pillaging of the Amazon, its impact on the earth and future generations” ~ American Songwriter

“Fine specimen of dark and haunting metal rock, the power of which is amplified through atmospheric background vocal contributions throughout” ~ Amplify Music Magazine

“An orchestral/progressive style that is hard to attain. Beyond the progressive sound, however, is that original set of three personalities only found in the best power trios” ~ Jammerzine

Brazilian progressive rock / metal trio Pentral present their debut long-player ‘What Lies Ahead of Us’ on the trail of high-energy singles ‘Aiming For The Sun’, ‘All My Wounds’ and ‘Silent Trees’ – the sonic launching pad into the sonic expansive of a concept album reflecting on today’s society, presenting the saga of a lowly couple fighting for their lives and sanity.

This long-player tells of the tragic reality of many Amazon dwellers, whose habitat, lifestyle and livelihood are brutally taken from them, not to mention the destruction of the forest itself. Through their videos and lyrics, Pentral tells the story about the destruction and pilfering of the Amazon’s natural habitat. The video for singles ‘Silent Trees’ (part 2) and ‘Aiming For The Sun’ (part 2) were filmed in their native Amazon – as chapters in a dedicated saga that will unfold, track by track. Directed by Roger Elarrat and produced by Luana Klautau, this also involves Lucas Escócio as director of photography and editor Roger Elarrat, this video features actors Anne Costa, Guto Galvão, Eduarda Cursino, Boris Knez and Aldo Lima.

Hailing from Belém in northern Brazil, Pentral is made up of Victor Lima (vocals, guitars, songwriter, lyrics), Vagner Lima (drummer) and Joe Ferri (bass guitar). Their unique take on alternative rock can be described as progressive, heavy, groovy and melodic, while the band also deliver a strong political message about what is going on in Brazil and all over the world.
Pentral stands for ‘spirit’ in Latin, indicative of the message this band is trying to inspire via their sound – the need to transcend this material world through the power of music, without losing connection with reality and human frailties.

Deeply influenced by their Amazon roots, Pentral’s music is influenced by many global influences while also striving to honor Brazil’s groove and unique harmonies, progressive rock, metal music, atmosphere and melody. This debut album sums up years of experimentation and the search for human awareness of the environment, peace and equality.

“The album ‘What Lies Ahead of Us’ is like a “declaration” and it was conceived way before COVID-19 came out…But it kind of fits the current reality we´re going through. This pandemic is the outcome of the unfriendly way we’ve been treating our environment and ourselves as well, and it served to expose our insensitivity, our lack of empathy,”says Pentral frontman Victor Lima.

“It’s a story about a man and a woman who lives in the woods. The forest is invaded by a group of mercenaries (pretty common in Brazil) in order to burn the woods down and make money with that, the man is killed, the woman manages to survive and she is pregnant, then she gives birth to a girl, and They try to survive in the city, experiencing racism, violence, hunger, selfishness, indifference. The only thing they have – they love each other.  So, the elements of the story – environment being destroyed, people suffering discrimination by the color of their skin, by the place where they came from, being selfish and violent for the sake of their own interests and prejudices, politics and religion abuse and extremism and the only way I believe things could be solved – the power of love. The album is like a journey of the three characters (a woman, a man, and their kid) passing through all the issues I’m talking about in the lyrics for these ten songs.”

As of May 7, the ‘What Lies Ahead of Us’ album is available everywhere digitally, including Apple Music and Spotify. It can be ordered via https://pentral.lnk.to/WhatLiesAheadOfUs or via Amazon.