Following the hiatus of the Murderdolls, Wednesday 13 took to the road on a UK tour in 2004 before returning to North Carolina to put together a more permanent band and releasing debut album Transylvania 90210 in 2005. The Horror Rock band has now released 8 albums with the latest Necrophaze being released in 2019 and gaining an 8/10 in my review.

Now, Wednesday 13 is releasing the four-track follow up EP titled Necrophaze – Antidote to provide some Shock Rock relief to the shitty world as it is.

Opening with catchy titled ‘Your Mother Still Sucks Cocks In Hell’, the high octane Punk vibe is strong with this sing-along and rather amusing take on a nasty image you will soon find yourself singing along with this guaranteed crowd favourite. When you’ve had a few beers, there will not much better than joining Me with the chorus.

Up next is ‘Screwdriver 2 – The Return’ where you can’t help but play air guitar which the simple riff before a stunning solo heats up the screwdriver that you’re imagining being stuck in your ear. This fast-paced track is again a cert for a sing-along.

The penultimate track ‘Devil Inside’ slows things down a little and the guitars become a little deeper to allow for a groovy riff to flow throughout the track. As the cymbals take a pounding the gravelly vocal really comes to the fore as you get down and dirty with the filthy riff.

The final track ‘Films’ has a real classic horror feel to it with subtle atmospherics that gives it a real chill and the music really is the star in this closing track. The sparing vocals are a gruesome narration to match the audible delights in a cinematic close to this EP.

Necrophaze – Antidote really has everything you could wish spread over the four tracks. From feet stomping singalongs to moody and sinister atmospherics, Wednesday 13 displays a full range in what is a very impressive EP.

With enough to feel satisfied, but little enough to make you want more, this EP has it all and is exactly what a release of this length should be about. This is an entertaining and shocking addition to any Rock collection. 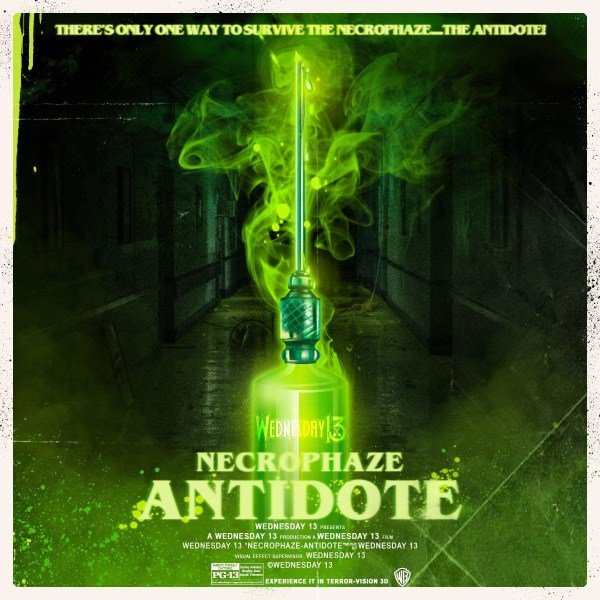