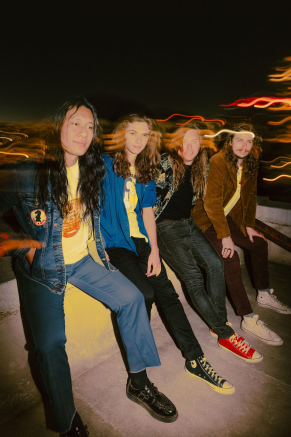 CHECK OUT THE “HYPOCRITE” MUSIC VIDEO

Stream the New Single “Hypocrite” on All Streaming Platforms

LA-based garage punk band Wavy Trees are sending their love to the brokenhearted in their latest single “Hypocrite.” The song’s anthemic melodies and grunge undertones make for a perfect heartbreak sing-along, and you can watch the official music video, directed by Ron Geffen from Rockland Studios, here.

What started as an “accident” during one of the band’s jam sessions, “Hypocrite” is an honest and pure testament to the frustrations of losing a relationship. The outlandish video takes the band through door-to-door “The Wavy Way” enlightenment recruitment in the San Fernando Valley. With doors constantly shut in the band’s faces, the four-piece ultimately decide to take their frustration out in the community with vandalism and more.

Zack Smith, the lead vocalist of Wavy Trees, shares the inspiration behind the track and video:

“‘Hypocrite’ is an anthem for those who were left behind by a lover. It’s about being sick of wasting your love on someone! When you love someone so much that even when they leave you, you still want them to take you with them when they go. It’s also the acceptance of losing someone. At the end of the day we all have that hypocritical side of us that wants things that aren’t the best for us.

The concept for the ‘Hypocrite’ music video came to us while driving around Los Angeles. Jason (our guitarist) noticed some missionaries going door-to-door and thought it would be hilarious is we dressed like they did. So, we decided to create our own make believe cult called “The Wavy Way” and use that concept to convey a satirical outlook on life in general. In the end, you will see that we were all hypocrites after all.”

If Wayne’s World and Bill & Ted’s Excellent Adventure collided in an alternate reality House party, Los Angeles based Wavy Trees would be the band playing in the backyard. The cosmic bartender at this gathering would be mixing swaggering hard rock riffs with the attitude and energy of garage-punk, dumping it into a shaker and pouring out a potent cocktail of we-could-give-a-f-ck fun.

Wavy Trees is made up of Zack “Moondog” Smith on lead vox/guitar/piano, Jason Espirito on guitar, Brian Duke on bass/guitar, and Jack Gallner on drums. The band is produced by the legendary Jay Baumgardner (Seether, Bush, Papa Roach, Lacuna Coil, Otherwise).

Check out Wavy Trees’ “Hypocrite” music video and stream the song on all streaming platforms today. 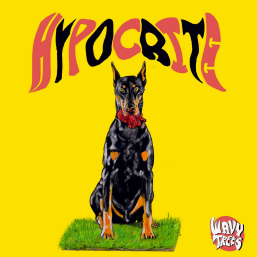