Led by vocalist Tamara Amedov alongside guitarist Manuel Buhl, drummer Gerhard Spanner and bass
player Tim Zahn, VISIONATICA first entered the symphonic metal scene in 2016. With fantastic, crystal
clear soprano vocals combined with powerful grooves, melodic guitars and orchestral elements, the band
announced themselves with their debut album ‘Force Of Luna’ and a popular single entitled ’She Wolf’.
Their second album ‘Enigma Fire’ marks the beginning of a newly minted worldwide collaboration
between the Nuremburg, Germany based act and Frontiers Music. Fans of bands such as NIghtwish,
Within Temptation, Delain and Xandria will find much to love here.
“We had a clear goal in mind and wanted to breathe life into the new album,” explains Amedov. “It has
more fire and the oriental Balkan influences also spice it up. All of us in the band have learned a lot since
our debut and developed our musical skills considerably. The new album is epic and dark!”
As well as the band’s new songs being more ambitious in scope, the lyrics also have a different focus.
Album opener and first single, ‘The Pharaoh’, deals with the secrets of ancient astronauts in relation to old
Egyptian relics, as well as the mystery about the origin of life. On ‘Roxana, The Great’, Amedov relates
the story of the wife of Alexander the Great of Macedonia, while ‘To The Fallen Roma’ pays tribute to
Sinti and Roma gypsies who were murdered in Auschwitz. Macedonian relatives of Amedov provide
folk chants on the song. For ‘Rise From The Ashes’, Michael Liewald from the group Winterstorm, who
also appeared on the first Visionatica album, returns for another duet with Amedov.
“As I am half Macedonian and currently engaged in genealogy, I wanted to add this special Balkan sound
to our songs,” she states. “I am proud of my southern European origin and want to integrate this special
kind of music into future songs. This is also one of our band trademarks.” 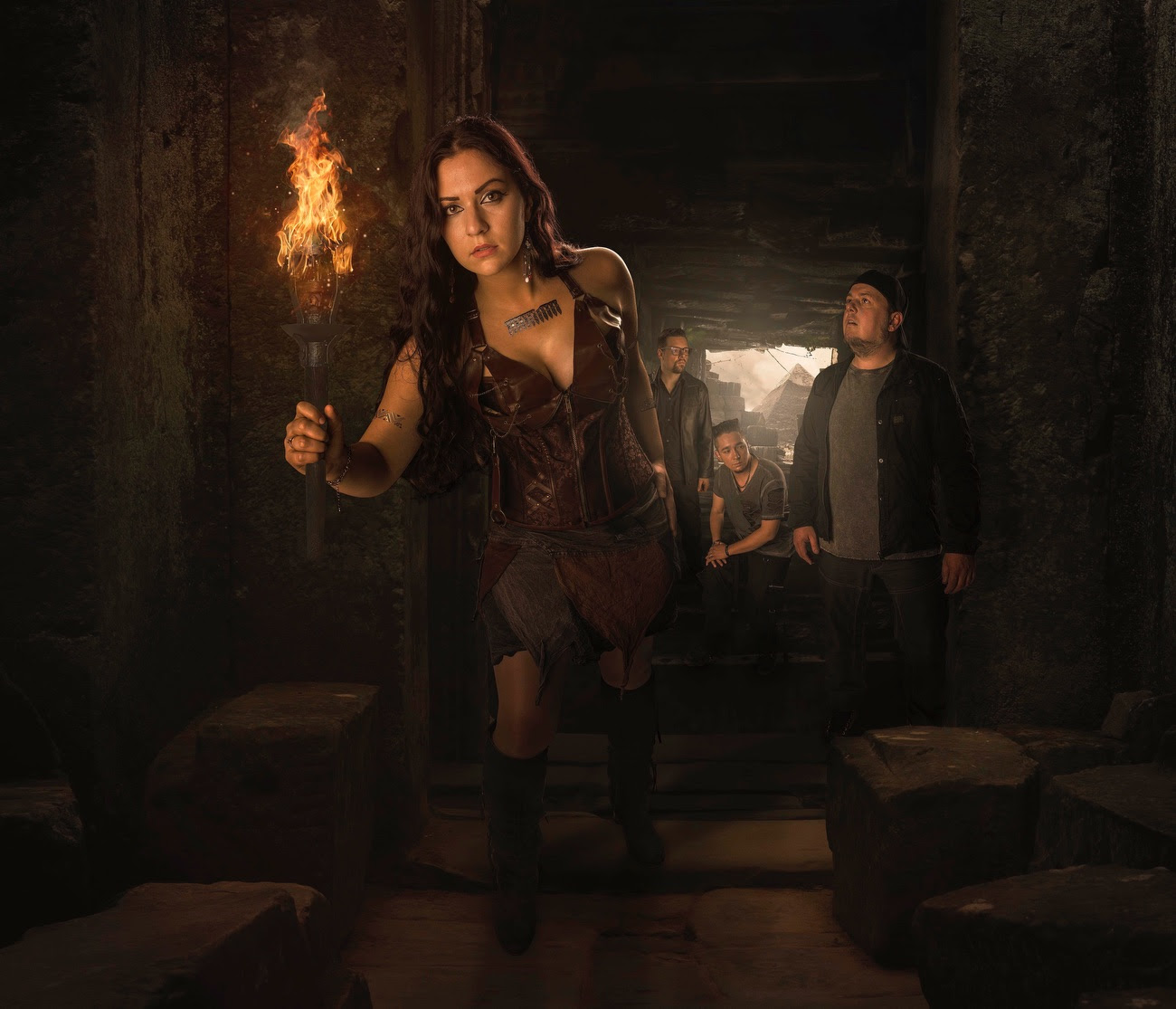 VISIONATICA formed in 2013 and began to flesh out ideas for their approach to the symphonic metal sound.
The group envisioned a sophisticated concept with the result that their debut album, ‘Force Of Luna’, was an
extremely melodic yet powerful record full of energy in which skilfully arranged orchestral sections merged
perfectly with virtuoso guitars, driving drums and the soprano voice of their classically trained vocalist. Its
first single, ‘She Wolf’, and equally powerful songs such as ‘Certainty Of Benevolence’ and the emotional
duet ‘The Thorns’ (featuring Winterstorm singer Michael Liewald) announced their arrival on the scene
in truly grand style.
With their new album, ‘Enigma Fire’, the group are fully intent on taking things to the next level. Be prepared
for bombastic orchestral arrangements paired with stunning fretwork and new musical influences that will
take listeners on a sonic journey they will want to experience over and over again.
ENIGMA FIRE
TRACKLISTING
1. Amari Sudbina Kali (Intro)
2. The Pharaoh
3. Fear
4. Roxana, The Great
5. Dance Of Fire
6. To The Fallen Roma
7. Incomplete
8. Secrets Of The Ancestors
9. Rise From The Ashes
Produced & Recorded by:
Visionatica & Timon Seidl @ Red Audio Studio redaudio.online
Mix & Mastering by:
Olaf Reitmeier @ Gate Studio gatestudio.de
VISIONATICA
Tamara Amedov : vocals
Manuel Buhl : guitar
Gerhard Spanner : drums
Tim Zahn : bass
visionatica.de
facebook.com/visionatica
twitter.com/visionatica
instagram.com/visionatica
youtube.com/visionatica