UV-TV – Release Exhilarating “Back To Nowhere” || New Album: ‘Always Something’ – Out 28th May 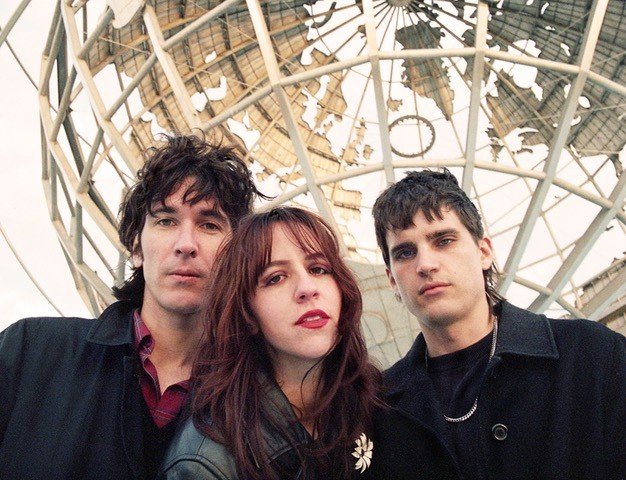 UV-TV
NYC TRIO RELEASE EXHILARATING NEW TUNE:
‘BACK TO NOWHERE’
STREAM HERE
TAKEN FROM NEW ALBUM:
‘ALWAYS SOMETHING’
– OUT 28 MAY, VIA PAPERCUP MUSIC –
“supremely catchy garage-punk, and they’ve only been getting better at it.”
STEREOGUM
“spiralling and infectious guitar pop”
GOD IS IN THE TV
Crashing in with the second single of their upcoming ‘Always Something’ (out 28th May via PaperCup Music), UV-TV are pleased to present: “Back To Nowhere”.
STREAM HERE
Hot on the heels of the acclaimed lead single “Distant Lullaby”, the New York trio kick things up another notch with a cut of breakneck pace that finds a band hurtling towards their new album with breathless intensity.
Railing against the world of constant productivity we find ourselves living in, “Back to Nowhere” sees UV-TV charting an alternative route of their own leisure. Cutting-loose from the societal pressures of the modern age and all its associated anxieties, it’s a track that proudly flies the flag for what the band call: “the art of doing nothing”.
Cruising between the retro indie-stylistics of The Primitives or REM to the atmospheric alternative leanings of Felt or The Smiths, lead-singer Rose Vastola’s aloof vocal coolly commands the course in a track that invites the listener to disconnect, take a backseat and just enjoy the ride.
Combining a classic feel with a fresh contemporary outlook, “Back To Nowhere” is another compulsively addictive sample of what to expect from their upcoming third studio release: ‘Always Something’ ahead of its arrival this Spring.
* * * *
A cornerstone in the continuation of the DIY and post-punk crossover scene in the US, UV-TV are founding members Rose Vastola (guitars/vox), Ian Bernacett (guitars), plus latest recruit Ian Rose (drums). Releasing their debut demo in 2015, the band have released a series of electrifying releases including two albums, 2017’s debut full length ‘Glass’, and 2019’s follow-up ‘Happy’, with their sound evolving with each record they stamp their name to.
Supporting like-minded souls on the East Coast scene like Parquet Courts, Screaming Females, and B Boys, word about UV-TV is reaching ever greater audiences. Featured in The New York Times group exhibition “Women Are Making The Best Rock Music Today”, the band were also praised by Paste Magazine as one of their “15 New York City Bands You Need to Know in 2020”. Standing out from the crowd for their ability to blend pop music melodies with their own definitive punk spirit, UV-TV are now readying their most assertive and essential release yet: ‘Always Something’.
Written and recorded during the intense isolation of early 2020, ‘Always Something’ is the first album to be completely written and recorded since the band’s relocation to New York (from Florida) and with new drummer Ian Rose as a full-time member. An album that finds a band grappling with the overwhelming darkness of the time it was made in, while embracing the feeling of the world falling apart all around them, the resultant record is one that walks a fine line between beauty and chaos with remarkable results.
Signing a new deal with New York-based imprint PaperCup Music, UV-TV will release ‘Always Something’, their first full-length album for the label on 28th May 2021. Available digitally, a run of 500 limited edition LPs will also be available in the US and for import in the UK & EU.
UV-TV – NEW ALBUM: ‘ALWAYS SOMETHING’ – 28 MAY 2021, VIA PAPERCUP MUSIC