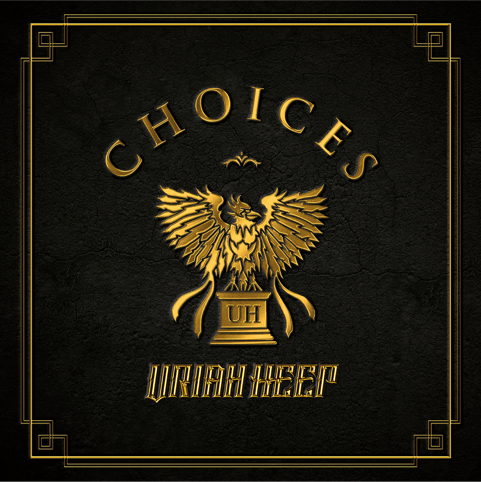 On 24th September BMG are delighted to announce the release of Choices, a personal selection of Uriah Heep hits and deep cuts from across the band’s exceptional fifty year and 24 album career.
Created with the full collaboration of Uriah Heep themselves and curated by guitarist and founder member Mick Box from the seminal albums by British hard rock legends Uriah Heep. The six discs, include personal selections from Ken Hensley and Lee Kerslake who sadly both passed in 2021. New additions to the Choices collection come from lead vocalist Bernie Shaw and keyboard player Phil Lanzon, who have both been with the band for 35 years.
This collection of 77 tracks, is completed with six art cards which carry personal notations from each band member and their reproduced signature.
‘Who would have guessed it, 50 years of Heep and counting! Our music has continued to stand the test of time, and the fans are the reason we are still here doing it. There is no better feeling than knowing our music has endured, and that our live shows continue to rock people in 62 countries worldwide.’ – Mick Box
To pre-order Choices, the 6 CD box set, go to: https://uriahheep.lnk.to/ChoicesPR

**
Uriah Heep and BMG are also proud to release the ambitious and beautifully presented Every Day Rocks box set on 24th September,  which includes the first seven albums on 12” vinyl picture disc, plus seven accompanying t-shirts (one for every day of the week), corresponding art cards feature motivational lyrics and a calendar wall planner for planning the week’s Uriah Heep listening. These albums are available officially for the first time as vinyl picture discs and the albums; Demons And Wizards and The Magicians Birthday feature both reimagined and original artwork by renowned fantasy artist Roger Dean.
Mick Box has personally signed an authenticity card which accompanies every Every Day Rocks box set.
Uriah Heep’s Every Day Rocks available exclusively via the Official Artist Store now to pre-order go to: https://uriahheep.lnk.to/EveryDayRocksPR
Evoking an era when prog, hard rock and heavy metal co-existed in an era of glorious, boundary-breaking music, Uriah Heep rose from inexperienced studio musicians with everything to prove to bona fide limo inhabiting rock stars.
After selling over 40 million albums worldwide, over the years Uriah Heep have influenced many different metal bands around the globe, among the most popular being Dio. Bands including A-ha, King Diamond, Krokus, Demons & Wizards, Fifth Angel and Axel Rudi Pell have all cited Uriah Heep as a band of personal influence, while W.A.S.P, Tesla and Blackmore’s Night have all covered the band’s songs.
Uriah Heep continue to tour until this day with founding member Mick Box.
Choices 6 CD track list
CD1 – Ken Hensley
1.  Paradise
2. The Spell
3. Weep In Silence
4. Rain
5. Circle Of Hands
6. July Morning
7. The Park
8. Echoes In The Dark
9. Misty Eyes
10. Fallen Angel
11. The Easy Road
12. Falling In Love
13. Sunrise
14. Sweet Freedom
CD2 – Lee Kerslake
1. July Morning
2. The Magician’s Birthday
3. Traveller In Time
4. Sweet Lorraine
5. Circus
6. Rainbow Demon
7. Come Back To Me
8. Shady Lady
9. All My Life
10. The Other Side Of Midnight
11. Who Needs Me
12. That’s The Way That It Is
13. Free Me
14. Stealin’
CD3 – Mick Box
1. The Park
2. Tears In My Eyes
3. Sweet Lorraine
4. Circus
5. Free N’ Easy
6. Woman Of The Night
7. Hot Persuasion
8. The Other Side Of Midnight
9. Straight Through The Heart
10. Cross That Line
11. Love In Silence
12. What Kind Of God
13. Trail Of Diamonds
14. The Outsider
15. Falling Under Your Spell
CD4 – Paul Newton
1. Lady In Black
2. Tales
3. Easy Livin’
4. Tears In My Eyes
5. If I Had The Time
6. Real Turned On
7. Come Away Melinda
8. What Should Be Done
9. Why (Alternate Version)
10. Sympathy
11. Free N’ Easy
12. I’m Alive
13. One Minute
14. Grazed By Heaven
CD5 – Phil Lanzon
1.  A Year Or A Day
2. The Magician’s Birthday
3. Wonderworld
4. Circus
5. Bad Bad Man
6. Question
7. Between Two Worlds
8. Voice On My TV
9. Universal Wheels
10. Waters Flowin’
CD6 – Bernie Shaw
1. July Morning
2. What Kind Of God
3. Mistress Of All Time
4. Wise Man
5. One Minute
6. Corridors Of Madness
7. Tales
8. Take Away My Soul
9. Heaven’s Pain
10. Heartless Land
Cat No. BMGCAT530BOX
Barcode: 4050538690439
http://www.uriah-heep.com/