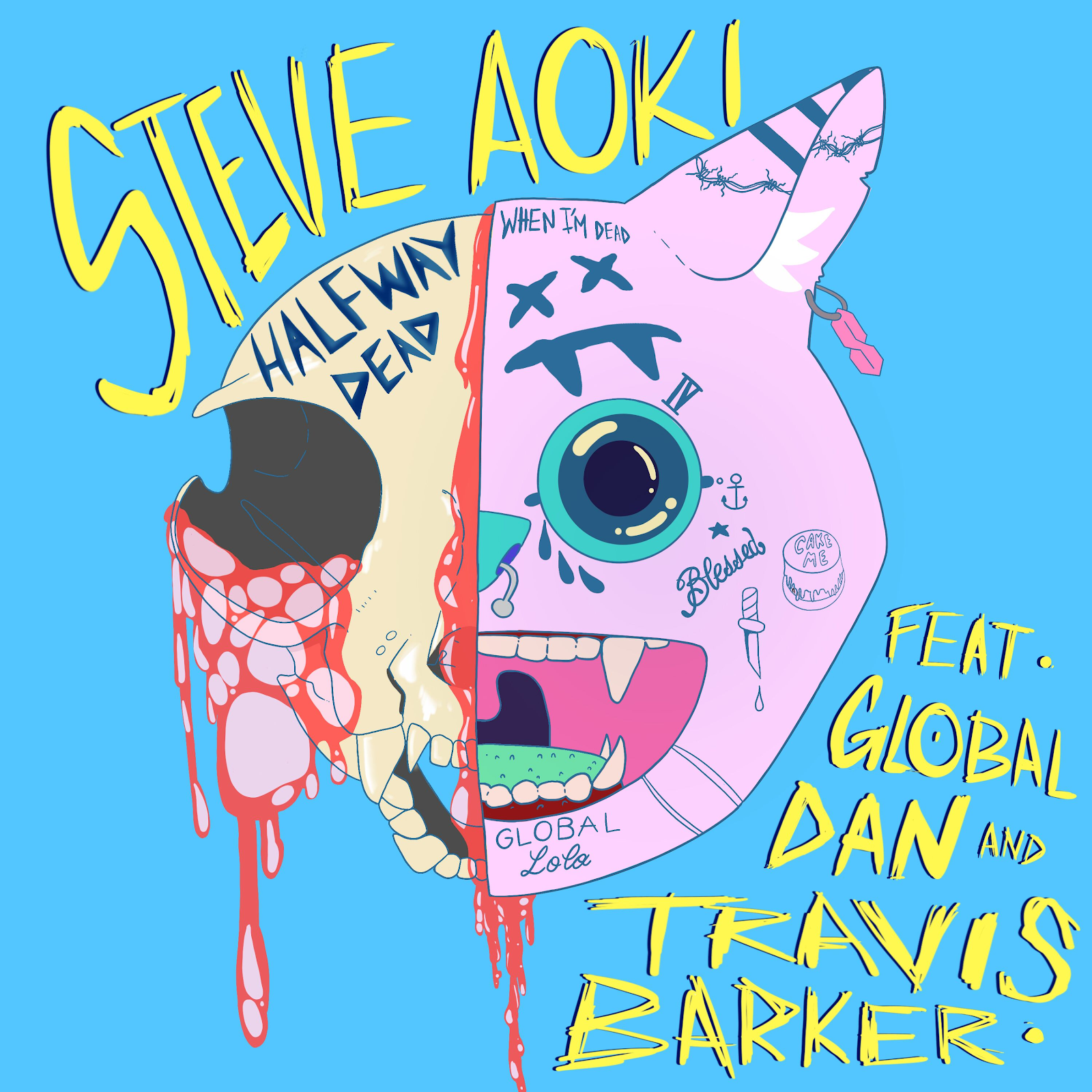 March 6, 2020 – Today, global DJ/Producer and entrepreneur, Steve Aoki, shares his new collaboration “Halfway Dead” alongside the confirmed April 3rd release date for Neon Future IV album. The song features legendary drummer Travis Barker and rising singer/rapper Global Dan, who broke through in 2017 via his viral single “Off-White” earning Virgil Abloh’s cosign, and will be with Aoki on his Neon Future IV: The Color of Noise Tour kicking off this month.

“Halfway Dead” opens with an upbeat bass guitar as Global Dan explores the feelings of heartbreak and frustration, that turns to pure anger. Dan sings “Cause I can see you lying through your teeth/You’re one step closer to being my enemy/You’re halfway dead to me,” while the anthemic background vocals repeat “I told you don’t waste my time” as Barker enters on the drums. The track progresses narrating the familiar cycle of emotions felt during a relationship when you know it’s about to end, and can no longer stand the other person. The combination of Aoki’s bright electro-pop beat, with staple blink punk, and Dan’s piercing lyrics, create a catchy breakup antidote for listeners to bang their heads to while playing loud.

“It was so organic working with these guys. Collaborating with Travis, whose a rock icon, is always a good time and brings me back to my roots. With Global Dan, not only did we do this song together on my album, but I signed him and produced his whole EP on Dim Mak. He mixes worlds I love like pop-punk and hip-hop in a way that I haven’t heard done before. He’s one to watch.” – Steve

“Anytime Steve wants to do something together I am always game. Making a pop punk song together is so exciting and something we’ve never got to do before. Steve and I always have a great time making music together.” – Travis

“I’ve been listening to Blink-182 since I was 14 and I discovered Steve from the movie Project X; he had done a remix on Kid Cudi’s “Pursuit of Happiness” and ever since I heard it I was hooked.

As far as how the song came to life, I was working on it with my friend, I sent it to Steve, he did his thing with the co-production, sent it to Travis, and Travis did his thing on the live drums. Working with them was a dream come true and I’m super hype for this tour. I just hope his fan base rocks with me.” – Dan

The new album serves as the latest installment from Aoki’s ‘Neon Future’ series and features previously released singles with Darren Criss, the Backstreet Boys, and Maluma to name a few, along with new tracks featuring artists such as Lay Zhang, Zooey Deschanel, will.i.am, and more. Neon Future IV sees Aoki in his latest musical state, “everytime I do an album it’s like a stamp, a time stamp of my musical evolution and progress and creativity coming out,” comments Aoki. “This is the timestamp from the end of 2018 to 2020.”

Aoki is is one of today’s most successful American cross-genre artists known for his unexpected and groundbreaking collaborations, most recently teaming up with Latin pop sensation Maluma on “Maldad”, whose music video is almost at 5M views to date and peaked at #5 on Billboard’s Top 10 Best Collaborations. Last year, Aoki also worked with the legendary Sting and platinum-selling trio SHAED on contemporary love anthem “2 in a Million,” which received praise from the likes of The New York Times and Billboard and currently has 2.7m+ streams on Spotify and also with the Backstreet Boys on the emotional single “Let it Be Me,” which currently has up to 20m streams on Spotify and Apple Music, combined.

Steve Aoki, the two-time Grammy-nominated producer/DJ is one of today’s most successful American cross-genre artists, collectively counting 2.6 billion music streams on Spotify, with an additional 355 million music streams on YouTube. As the founder of the trendsetting record label, events/lifestyle company, and apparel line Dim Mak Records, which he founded in 1996, Aoki has helped launch the careers of global acts like The Chainsmokers, Bloc Party, The Bloody Beetroots, The Gossip, and The Kills, among many others. Dim Mak today counts more than 1,000 official releases from the biggest acts and most buzzing newcomers across EDM, indie rock, hip-hop, and beyond over its two-decades-plus discography. As a solo artist, Aoki boasts a lauded discography that includes: Wonderland (2012), his debut solo album, which garnered him his first-ever Grammy nomination for Best Dance/Electronica Album; the Neon Future series, which includes Neon Future I (2014, certified gold by the RIAA), Neon Future II (2015), and Neon Future III (November 2018) and the hip-hop centric Steve Aoki Presents Kolony (2017). Recognized by Forbes as one of the top 5 world’s highest paid DJ’s and the world’s hardest working DJ, Aoki is “one of the most in-demand entertainers in the world” (Billboard), counting more than 250 tour dates per year, with past performances at nearly every top festival around the world including Coachella, Ultra Music Festival, Lollapalooza, Fuji Rock Festival, Tomorrowland, Electric Daisy Carnival, and more. In 2012, Aoki founded THE AOKI FOUNDATION, which primarily supports organizations in the brain science and research areas with a specific focus on regenerative medicine and brain preservation.

Travis Barker is an American musician and producer who has sold millions of records with his bands Blink-182, Transplants, +44, and as a solo artist. Called one of the greatest drummers of all time, Barker has since established himself as an incredibly versatile drummer, producing and making guest appearances in music projects of numerous music genres including hip hop, alternative rock, pop and country. Barker’s numerous solo collaborations have included Yelawolf, Game, Lil Wayne, Tom Morello, Cypress Hill, Ludacris, RZA, Slash, Steve Aoki, DJ AM, Kid Cudi, Ty Dolla $ign, Prayers, Kid Ink, Antemasque and many many others. Aside from drumming and producing, he founded the clothing company/lifestyle brand Famous Stars and Straps in 1999. Companies such as DC and Zildjan cymbals have co-designed products in his name. He recently released his first memoir through Harper Collins titled Can I Say, which was a critically acclaimed New York Times best seller. 2016 saw the return of Blink-182 with their critically acclaimed, chart topping #1 album California coupled with their sold out headline North American tour.

Global Dan is an animated, dexterous rapper and songwriter hailing from Silver Spring, Maryland, happily finding his footing as a multifaceted, hip-hop-leaning recording artist. As a teenager growing up in the DMV area, Dan began finding solace in the burgeoning underground scene that soundtracked his high school years. After trying his hand at rapping for the first time, Dan decided to fully embrace his moniker and take his burgeoning career to new heights. While only a year deep in the game, Global Dan released his breakthrough track, 2017’s “Off-White,” with the infectious Mongo-assisted single going on to amass over 6 million streams and garner the attention of Louis Vuitton’s artistic director and Off-White founder himself. With a coveted cosign from, Virgil Abloh, who later personally designed the cover art for the song’s remix featuring Rich The Kid and Madeintyo, Global Dan went on to release his debut mixtape, Global Warming. Global Dan has since gone on to collaborate with Steve Aoki and Travis Barker (Halfway Dead) ,G-Eazy (“W.A.N.T.S”), AzN (“Dark Out”) and Lil Skies (“Moving On”), with the latter receiving the visual treatment from reputed illustrator, Distortedd. From a self-made rapper to advocate for mental health, Global Dan is ready to embrace wherever his promising career in music takes him next, all while staying true to himself.