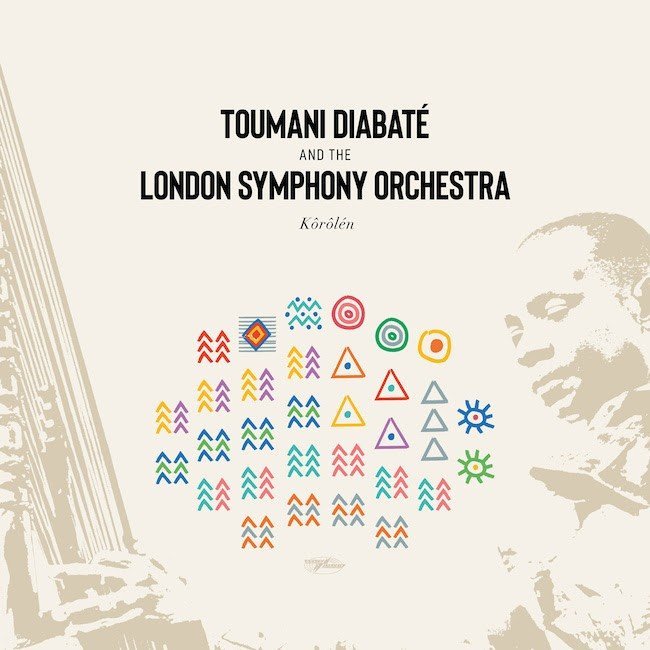 Photo credit: Aboubaker Sidick
Toumani Diabaté and the London Symphony Orchestra today present ‘Elyne Road’, the third stunning piece taken from their groundbreaking collaboration ‘Kôrôlén’, due for release on 23rd April through World Circuit. The track’s orchestral arrangement was created by acclaimed American composer Nico Muhly.
“The kora is such a thrilling instrument: it has an incredible sound capable of creating intimate textures and larger shimmering sonic architecture,” says Nico. “I wanted to keep the orchestra in a different sonic room to Toumani, to create a space in which his playing could simply happen, and the orchestra would make room for embellishment and spontaneity, and provide just a few subtle prompts to which Toumani could react in his improvisations.”
Toumani further elaborates on the project: “African music has a mystic and classical side, a divinity…it is not only about dance, and people need to know this.”
LISTEN TO ‘ELYNE ROAD’
‘Elyne Road’ joins two previous tracks shared to date, including ‘Mamadou Kanda Keita’, a shimmering and fresh interpretation of ‘Mamadou Boutiquier’, an ancient composition well known in another form from Toumani’s Grammy-winning album with Ali Farka Touré.
HEAR ‘MAMADOU KANDA KEITA’
Commissioned as a special project by the Barbican Centre in London and produced by World Circuit, Kôrôlén features Diabaté and his group of eminent Malian musicians (including Kasse Mady Diabaté and Lassana Diabaté), accompanied by the soaring presence of the LSO in dedicated arrangements by Nico Muhly and Ian Gardiner and conducted by Clark Rundell. The title bestowed by Diabaté on this unique and groundbreaking release, ‘Kôrôlén’, translates from the Mandinka language as ‘ancestral’ – a fitting theme for an album that brings together ancient griot melodies and Western orchestral arrangements, resulting in an achingly beautiful and fresh neo-classical sound that will appeal to admirers of African, traditional and new classical, and ambient music.
African music has famously produced some of the world’s most danceable grooves – but as Toumani Diabaté has shown better than anyone, there is another gentler and more meditative current to its creative flow. “There’s a mystic and classical side to African music, a divinity,” says the world’s most celebrated kora player. “It is not only about dance, and people need to know this.” It’s one of the reasons why Toumani embraced the invitation to work with the London Symphony Orchestra and conductor Clark Rundell.
The result is a remarkable collaboration between West African griot/jeli tradition and European conservatoire-trained classicism that thrilled those who were privileged to be in attendance when the project was staged at the Barbican in 2008. Now for the first time the recording of that unforgettable night is being made available to a wider audience as the album Kôrôlén.
LISTEN TO ‘HAÏNAMADY TOWN’
It’s a record that touches many bases, from ancestral African to western classical via ambient and the contemporary neoclassical stylings of composers such as Max Richter and Nico Muhly. As Toumani puts it, the aim was to say to audiences, “Look at this music in a new way, look at African music in a different way.”
Never before had a kora been deployed as a solo instrument in a symphony orchestra and so the collaboration required careful preparation to find the common ground where the improvisational and interpretative strengths of Malian ancestral music could meet with the more structured demands of an orchestral score. After Toumani and Clark had laid the groundwork, Ian Gardiner and Nico Muhly were brought in as arrangers to create a score with which the LSO could work.
“Our music is older than Bach”, Toumani enjoys pointing out – but at the same time, it is music that exists in the moment and which comes to life in the imagination of the musicians playing it. And so the music altered again in rehearsal under Clark Rundell’s baton, as the orchestra began to explore the infinite possibilities of working with Toumani and his musicians, tentatively at first but with an increasing vitality and confidence.
In addition to the Barbican concert presented on Kôrôlén, there were two further symphonic performances in Liverpool and Oslo, each with a different orchestra and with subtle variations in how the pieces were played, although the core of the material remained the same. With this record, Toumani Diabaté urges us to “look at African music in a new way.” Yet Kôrôlén does something more than that. It shows how different cultures can come together to find a spirit of shared humanity that transcends the artificial barriers that divide us. And right now that has never been more needed.