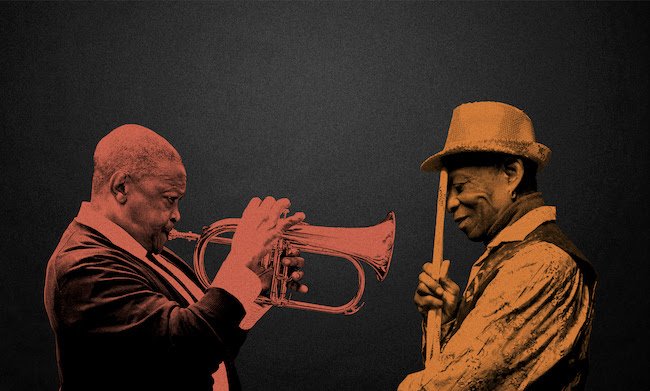 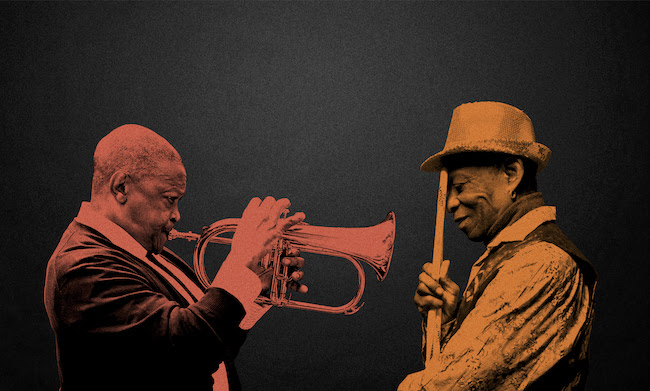 Credit: Brett Rubin & Bernard Benant
Tony Allen & Hugh Masekela’s classic collaborative album Rejoice will be reissued in Special Edition formats on October 22nd, available as a 2CD Casebook, 180g Gatefold 2LP and streaming & download. For this Special Edition release, World Circuit have gone back to Allen & Masekela’s original 2010 mixes and added previously unheard parts from the follow-up 2019 sessions to create 8 reimagined bonus mixes. The physical formats will also feature liner notes and photos. ‘Slow Bones (Cool Cats Mix)’ is the first of the bonus mixes made available to stream now.
LISTEN TO ‘SLOW BONES (COOL CATS MIX)’ HERE
Originally released in March 2020 to rave reviews, Rejoice’s significance has only deepened since Tony Allen’s passing, aged 79, in April 2020. As one of the final recordings (and the last to be released during his lifetime) by Allen, and the first posthumous release by Masekela after his passing in 2018, it now stands as a fitting memorial to two fearless titans of global music.
WATCH THE VIDEO FOR ‘WE’VE LANDED’ HERE
Having first met in the 70s thanks to their respective close associations with Fela Kuti, Allen, the Nigerian master drummer widely hailed as the co-founder of Afrobeat (and long-time member of alt-rock supergroup The Good The Bad & The Queen), and Masekela, South Africa’s legendary trumpet player, talked for decades about making an album together. When, in 2010, their touring schedules coincided in the UK, the moment presented itself and producer Nick Gold took the opportunity to record their encounter. The unfinished sessions, consisting of all original compositions by the pair, lay in archive until after Masekela passed away in 2018. With renewed resolution, Tony Allen and Nick Gold, with the blessing and participation of Hugh’s estate, unearthed the original tapes and finished recording the album in summer 2019 at the same London studio where the original sessions had taken place. Allen and Masekela are accompanied on the record by a new generation of well-respected jazz musicians including Tom Herbert (Acoustic Ladyland / The Invisible), Joe Armon-Jones (Ezra Collective), Mutale Chashi (Kokoroko) and Steve Williamson.
‘Rejoice’ can be seen as the long-overdue confluence of two mighty African musical rivers – a union of two free-flowing souls for whom borders, whether physical or stylistic, are things to pass through or ignore completely. According to Allen, the album deals in “a kind of South African-Nigerian swing-jazz stew” – a description borne out by even a cursory earful of the parallel harmony horn hook and loping drums of ‘Agbada Bougou’, the propulsive percussive swing and brass chatter of ‘Coconut Jam’ or the skittering snare drums of ‘Obama Shuffle Blues’.
As well as blowing exquisite flugelhorn, Masekela was also inspired to overdub some spontaneous vocals on a trio of numbers, either deploying colloquial Zulu, as on the seductively loose-limbed opening track, ‘Robbers, Thugs and Muggers’, with its earworm chant of “O Galajani” – township slang for any such collective of rogues – or, as on the appropriately jazz-meets-Afrobeat-hued tribute to Fela Kuti ‘Never (Lagos Never Gonna Be The Same)’, in English.
“The feeling was really good”, Allen recalled of those initial sessions. “All of us were thinking we were going to follow it up with overdubs of percussion, keyboards, voices and so on. It was an exciting idea.” Unfortunately, diarising those studio dates would prove problematic, even though Masekela and Allen would regularly bump into one another on the European festival circuit. “Every time we met he would ask me, ‘What’s happening with this project?’ I had to say, ‘I don’t know!’ Eventually, I asked Nick if I could hear the tapes, and that started the project back up again. Unfortunately, Hugh passed away soon after.”
Allen pronounced himself very happy with the finished album and remained phlegmatic about its protracted gestation. “Ten years is a long time from beginning to end of [making] an album, but my own philosophy is that everything eventually appears at the right time, for a reason…”
REJOICE [SPECIAL EDITION] TRACKLISTING:
Disc 1:
1. Robbers, Thugs and Muggers (O’Galajani)
2. Agbada Bougou
3. Coconut Jam
4. Never (Lagos Never Gonna Be The Same)
5. Slow Bones
6. Jabulani (Rejoice, Here Comes Tony)
7. Obama Shuffle Strut Blues
8. We’ve Landed
Disc 2:
1. Robbers, Thugs and Muggers (O’Galajani) (Cool Cats Mix)
2. Agbada Bougou (Cool Cats Mix)
3. Coconut Jam (Cool Cats Mix)
4. Never (Lagos Never Gonna Be The Same) (Cool Cats Mix)
5. Slow Bones (Cool Cats Mix)
6. Jabulani (Rejoice, Here Comes Tony) (Cool Cats Mix)
7. Obama Shuffle Strut Blues (Cool Cats Mix)
8. We’ve Landed (Cool Cats Mix)
PRAISE FOR ‘REJOICE’:
“Rejoice is a remarkably coherent blend of swing and Afrobeat, featuring some of Allen’s finest work to date and Masekela’s inimitable horn melodies shining
on numbers such as Agbada Bougou.”
The Guardian
“A love letter that could only be written by two masters at the peak of their powers, a fitting send-off to a friend…it’s also a record defined by wisdom and experience. As it celebrates the end of one journey, it looks hopefully upon the start of many new ones.” 8.0/10
Pitchfork
“Eight gem-like tracks that breath and groove gloriously… Thank God the tried-and-true World Circuit team was there to record it – truly one for the ages!”
AfroPop Worldwide
“One of the African releases of the year.” 4/5
Evening Standard
“Worth the wait.” (Album of the Week)
The Sunday Times
“Genuinely spectacular… stands alongside both artists’ greatest work.” 4/5
MOJO
“Warm, uplifting and fizzing with both passion and virtuosity, Rejoice is not only a fitting last will and testament from Masekela, but a glorious affirmation of music at its most potent and universal.” 9/10
Uncut
“Loose-limbed, laidback and effortlessly cool, the album is infused with unhurried, organic joy of playing”
The Line of Best Fit
“A welcome blessing for listeners and an exquisite example of Allen and Masekela’s magnificent talents.”
Associated Press
“A celebratory album of great verve, it is a fine tribute to Masekela and another gem in Allen’s long, collaborative discography.”
Huck Magazine
“Well worth the wait…This is surely one of the African albums of the year.” 5/5 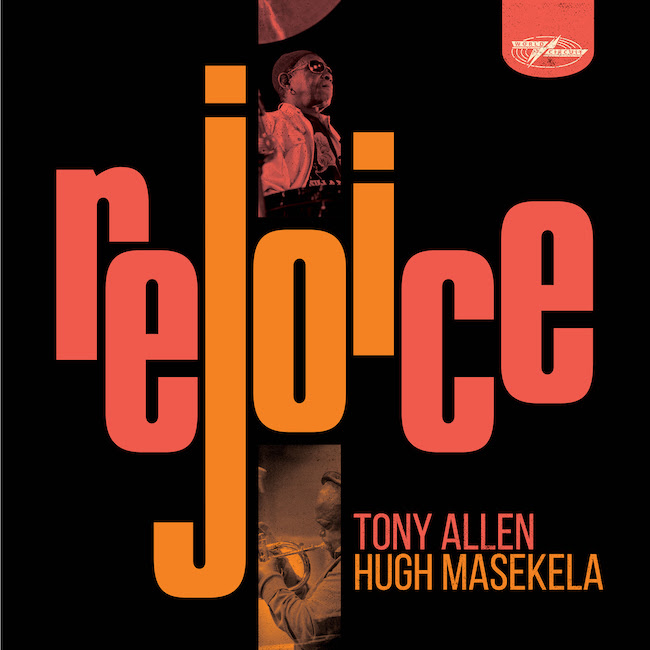