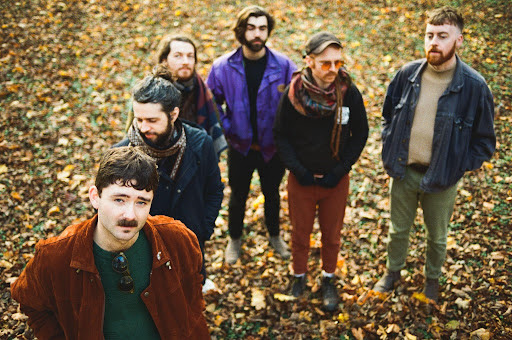 When the original single version of Ad Nauseam dropped in early 2020, THUMPER embarked on an extensive UK and EU tour in support of the song.

As it began to get extensive playlisting on Spotify, Apple Music, Kerrang and BBC6, this was to be followed up by a months of festival appearances and shows in Iceland, North America and more. Two weeks in, and this breakneck schedule was cut short by Covid, and all plans, touring and otherwise, were axed.

Once the PAUSE button was well and truly pressed on the year they were about to have, THUMPER began channelling their energy into a different type of year. Behind the scenes their debut album started to take shape, with the band holed up in their home studio for months on end.

Now THUMPER are taking up where they left off with a raft of shows including  festival slots at Iceland Airwaves, Reeperbahn, a huge UK tour and Ad Nauseum (2021 mix) released on 10th September.

Ad Nauseam is a song about repetition and vanity, a cautionary tale about getting too close to that which you know will eat you alive. As the protagonist circles the drain “on and on…”, the listener is brought on a saccharine, fuzzed and blown out journey which builds in tension and dynamic to the end.

“A band so far up my street they might as well be kicking my front door in”
Phil Taggart
“Pop hooks and ragged guitar noises collide on THUMPER’s bratty, frenetic punk rock.”
Q Magazine“My highlight of Eurosonic, Two drummers making an epic noise on stage. Such a huge band. Really really massive sound”
Abbie McCarthy, BBC Radio 1
“In Dublin it’s been thrilling to witness The Murder Capital, Fontaines D.C. & THUMPER to see who can be the most visceral on stage and on record”
Hot Press Magazine
“Cult heroes in their native Dublin, the band’s crunching sound and intense live shows are shot through with a dynamic, ultra-infectious sense of energy.”
CLASH MagazineFOR MORE INFOMATION: