DON’T MISS THE EXCLSUSIVE ROCKUMENTARY
“LIFE AFTER LOCKDOWN” OUT ON! 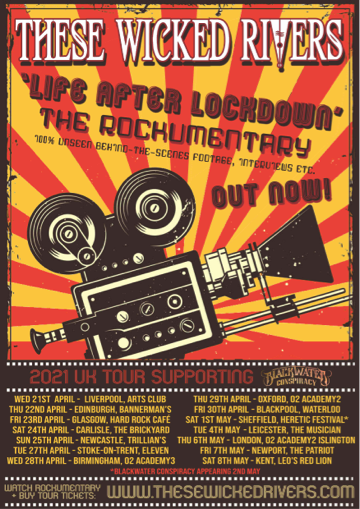 2020 has been an unpredictable year, to say the least, and yet These Wicked Rivers released their debut album, Eden, in the midst of a pandemic, managing to catch the attention of critics and fans alike. Off the back of their successful debut, These Wicked Rivers are excited to finally announce their return to UK stages, with a full UK tour in April/May 2021, as special guest to Blackwater Conspiracy. To coincide with the announcement, the band is also releasing an exclusive rockumentary Life After Lockdown on 28thSeptember.

With their new 40-minute Rockumentary ‘Life After Lockdown’, These Wicked Rivers welcome fans behind the scenes allowing them a sneak peek of the band’s recent return to rehearsals. With an “up close and personal” approach, the band reflect on the recording of their debut album ‘Eden’, sharing stories of what it was like spending 11 days locked away in the Welsh Valleys with producer Jethro Chaplin, give insight into the roots of how the band originally formed, the song writing process, what things they can’t live without and much more.

Guitarist Arran Day comments: “We’re delighted to finally be able to showcase what we’ve been putting together with Ryan Vacey. Coming back to the rehearsal space was such a weird mixture of emotions. Aside from band meetings over video call, the four of us had not engaged for several months and we really wanted to document this first experience. The documentary also gives an insight into the band for those that are yet to indulge, with exclusive interviews around the bands origins, influences and how our debut album ‘Eden’ came to be. We really hope this builds on our connection with the fans in such disconnected times.”

These Wicked Rivers were forced to postpone their tour back in May, due to COVID-19 pandemic, and now they are excited to announce their return to the road in April 2021, when they will be sharing the stage with Blackwater Conspiracy for the mainland UK leg of their tour. In addition, the band has been confirmed for a prestigious main stage slot at Ramblin’ Man Fair 2021.

Drummer, Dan Southall says: “We were stripped of the chance to take “Eden” out on the road in the Summer of 2020 by the Covid-19 pandemic so to now have the chance to get this album out to fresh ears by travelling the country with a band like Blackwater Conspiracy is something we’re really excited about. It feels long overdue and we really can’t wait to see everyone.”

Formed in 2014, These Wicked Rivers have previously released two EPs: The Enemyand II, alongside a double A-side Shoulda Known Better, which gained the band a first wave of critical acclaim.