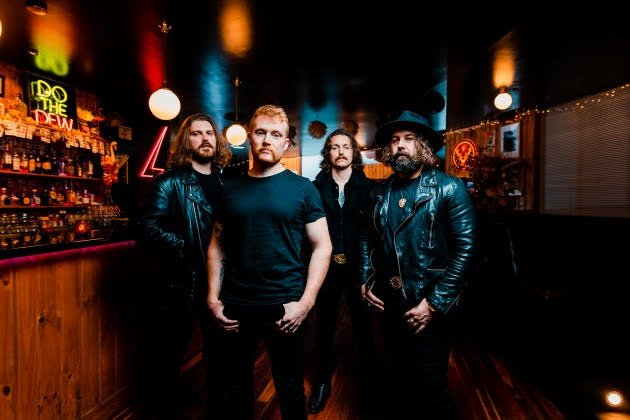 THE UGLY KINGS may channel the flavor of groups like Queens Of The Stone Age and Danzig, but their distinctive, revitalizing infusion of dark energy is evident while preserving razor sharp, daringly introspective control with clever lyricism, addictive riffage, catchy melodies and a heavy power blues flavor. Following 2018’s Darkness Is My Home, which was lauded by the global music press upon release, with Strange, Strange Times, the four- piece is poised to turn heads and continues to infuse their foreboding alt-rock with blackened blues and gritty punk edge.

Following previously- released singles like the catchy yet punk-infused anthem “Technodrone” and smoldering blues rock standout “The Devil Comes With A Smile”, today the Australian four- piece have shared a brand new video for the album title track! The furious “Strange, Strange Times” punches from 0 to 60 at the start of its five-and-a-half minutes before frontman Russell Clark brings the listener back down to earth with his ominous, Jim Morrison-esque croons of blissful ignorance amid relentless chaos. Watch the band perform “Strange, Strange Times” in their brand new video right here:

“Strange, Strange Times is about anxiety,” the band comments. “The world seems to be getting weirder and weirder every year and we are becoming more and more in touch with everything that is happening on earth as it happens. It’s impossible to process and impossible to make sense of. Strange, Strange Times is the low hum that we all carry around with us every day, the itch on our back that we can’t scratch, it’s the first cut in a thousand cuts. Take a deep breath, close your eyes and count to ten.”

Each song on their new album is about a different state of mind in this indeed strange, strange time. Both lyrically and musically, THE UGLY KINGS have created a captivating and enthralling ride, and in a scene in which gimmick-free, angsty, inspired rock n’ roll is becoming increasingly difficult to come by, Strange, Strange Times is a breath of welcomed air!

Coming out in LP, CD and Digital formats on August 13, 2021 via Napalm Records, the album pre-sale is available at THIS LOCATION!