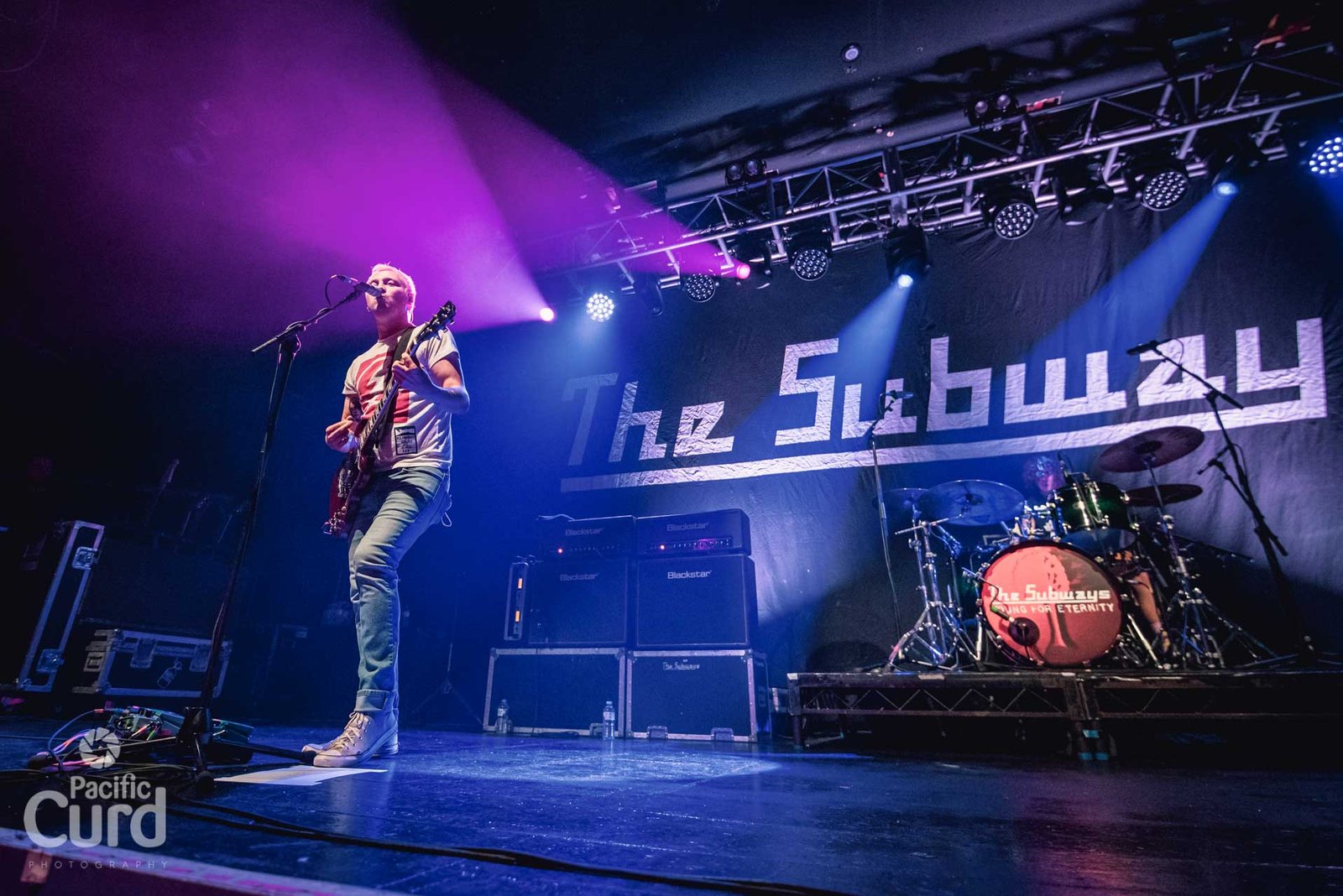 Friday night in Bristol and the night is young with the doors of the O2 opening in plenty of time to check those good old covid passes before letting any fans enter.

Tonight, English rocker trio The Subways were playing as part of their ‘Young for Eternity’ tour marking their 16th year anniversary.

Just one band to support tonight and that was Berlin-based indie band Art Brut with the night kicking off at 7 pm on the dot.

The O2 was about half full at this point but once the band graced us with their presence on stage, people made their way over to watch from getting the beers in.

Heading straight into their set with the infamous ‘Formed a Band’, vocalist Eddie Argos swayed from one side stage to the other brandishing his black tiger covered shirt before their second track ‘My Little Brother’ was updated to this moment in time – Argos’ bro now being a teacher and not so ‘out of control’.

For those who haven’t had the pleasure of having their eardrums tantalised with Art Brut’s sound, it can take a bit of time to fathom out what they’re all about. With comments being made about ‘Sleaford Mods sounding like the Pet Shop Boys being thrown down the stairs, there’s a feeling that perhaps this guy telling stories should be on a stage doing a solo act at a comedy gig.  But once the first few tracks were played, everything just seemed to slot into place.

A theme started to appear in that each song was a story (a true one, mind you) as Argos swung his mic around like a lasso as he came closer to the edge of the stage to test his German skills out on the crowd.

Their set was at times a little chaotic – whether intentional or not, it was entertaining.  The band were having a blast doing their own thing as Argos swept back that floppy hair from his face to tell the crowd what the next song was all about.

With tracks taken from all 5 of their studio albums, this was to be their last night of supporting The Subways with their inimitable punk indie sound.

Finishing with ‘Post soothing Out’ from their album ‘It’s a Bit Complicated, the members of the band were introduced as Argos concluded saying ‘Peace out’ as he blew the crowd a kiss and left the band on stage to wrap up the set.  A drum solo followed with the rest of the band taking the opportunity to have a bit of a party before their set finished.  And yes, they totally smashed it.

8.30pm arrived and the O2 was now at full capacity whilst the crowd had watched the stage being cleared and lined with Black Star amps ready for the headliners.

The lights went down as guitarist and vocalist Billy Lunn, bassist Charlotte Cooper and drummer Camille Phillips bounded out on stage to the crowd’s cheers.

‘I Want to Hear what You Have to Say’ was the opening track taken from their first album ‘Young for Eternity and Cooper didn’t waste any time jumping with eruptions of energy in her bright red baseball boots and blonde locks. But before heading into their next track, Lunn made a point of introducing new recruit and drummer Camille to the crowd (AKA drummer for The Ramonas) as she waved her drumsticks in the air and smiled with glee as she sat at the back of the stage on her kit.

‘Rock N Roll Queen’ was a must for their setlist sending the crowd into a frenzy with fans bellowing the lyrics at the top of their lungs.  It was more than obvious that the band felt at home being back on stage after the music industry was hit the big time during the pandemic and they were definitely about to let their hair down.

Each track was played with such gusto and passion and Lunn was on a high talking in between tracks about the history of the band. It was pretty difficult to believe how youthful each of them looked on stage knowing that the band had formed 16 years ago. With him feeling that he wasn’t worthy to be performing on that stage, he spoke about the start of their success which began by sending legendary founder of Glastonbury Festival, Michael Eavis, a demo tape.  To show the band’s heartfelt thanks, the track ‘With You’ was dedicated to the crowd which was embraced with open arms – quite a poignant moment during the evening.

With the crowd warmed up, their set moved on to some tracks suggested by fans. ‘Turnaround’ was the first in line which saw an already moshing crowd hurling drink in the air as the lights flickered in vibrant colours above them. ‘Kalifornia’ was another taken from their second album ‘All or Nothing’, and was a hot fave by Cooper as she thanked whoever had chosen it to feature on their already hefty set list.  But they ploughed through without even breaking into a sweat. The clout that the three of them produced on that stage was insane – just a guitar, bass and drums – it was quite remarkable to watch and to take in at times.

No matter what kind of track was being played, their momentum lingered until the very end.  From tracks such as ‘Strawberry Blonde’ to the more prominent ‘Oh Yeah’, drummer Phillips still managed to shake her ‘barnet’ to every available beat going whilst Cooper ran riot on her half of the stage.

Lunn predominately interacted with the crowd for most of the night grinning like the cat that’s got the cream – and quite rightly so. The crowd were at their beckoned call, they were having a damn good time finally performing live, and they had a couple more nights before their tour was due to end. Plenty to be happy about.

As the end of their set approached, showing just how competent the band were, a member of the crowd shouted out a request which was duly taken on board. No ‘ifs or buts’- ‘Kiss Kiss Bang Bang’ it was. Taken from their third studio album, this banger of a track was played flawlessly on demand.

A new album is on the cards and with excitement, Lunn introduced the penultimate track of the night -a newbie titled ‘You Kill My Cool’. Gritty from the onset with stomping drums, this tune was sure to be a winner. Needless to say, it was grasped by the crowd who were still in for one more treat before the night was out.

Now at most gigs you’d expect the band to leave the stage, have a breather and neck a beverage before heading back to a hungry crowd for an encore.  That’s the norm, right?  But not The Subways.

Instead, the crowd were indulged in a second helping and extended version of ‘Rock N Roll Queen’.  Why you ask?  Why the fuck not?  The band love playing it and that was reciprocated by the crowd as they had another chance to go mental once again before the night drew to a close.

And that was it – the night was over in a flash.  The band thanked Bristol for ‘being so cool’ – Phillips proved that she was most definitely the tastiest filling in a Subway sandwich on the skins – and it’s fair to say that she’d settled into band nicely. The night was totally swell and everything was gravy.

The Subways finish their tour on Sunday 3rd October at the Wedgewood Rooms in Portsmouth after a double stint.