The Mysterines New Single ‘In My Head’ Today Via Fiction 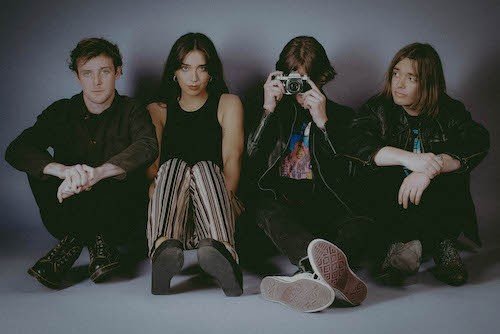 RETURN WITH NEW SINGLE ‘IN MY HEAD’

“The band alchemise fuzztoned garage rock into something that feels fresh, electrifying and vital” MOJO

“I think we can all be in agreement that this is, without a doubt, the best The Mysterines have ever sounded” Jack Saunders

The Mysterines have returned with their first single of 2021, the statement making ‘In My Head’, via their new label Fiction Records. Stream here.

Gritty and suspenseful, ‘In My Head’ continues in triumphant stride for the Liverpool four piece and marks a thrilling new chapter for the band. A burgeoning tour de force, The Mysterines have been making serious waves in their short career. Barely out of their teens, they sold out their first ever UK headline tour in February 2020, have supported Royal Blood, The Amazons and Sea Girls on tour, as well as headlined the BBC Introducing Stage at Reading and Leeds. Their fans include Steve Lamacq, Jack Saunders, Dan P Carter and Huw Stephens, alongside tastemakers NME, Independent, Metro, MOJO, DIY, Dork, Upset, CLASH and Gigwise.

About their new single, frontwoman Lia Metcalfe says “‘In My Head’ appears to be a love song, but that was not the original intention. I did want it to superficially be seen as that, but in reality it’s a song about people who struggle with their mental health. Partly autobiographical, it’s about how sometimes life can feel like you’re being haunted by something out of your control.”

As the entire world spiralled into nearly complete and utter destruction for the past year, The Mysterines took this time to work on their highly anticipated debut album, in arms with esteemed producer Catherine Marks (Wolf Alice, The Big Moon, Frank Carter & The Rattlesnakes, Foals, The Killers, Alanis Morisette) at Assault and Battery in London.

“Anyone who has ever been granted the opportunity to record a debut album understands that this situation could be deemed as ‘bad timing’. Instead, I like to refer to it as ‘almost perfect timing’. Nothing seemed more fitting than to record an album about self destruction whilst the world itself entered into what seemed like a brief apocalypse.” says Lia.

She continues “As a band, we were really grateful to still be able to create during such bleak times. Our wonderful producer Catherine Marks, who put everything she had into the record, turned my songs into perfect pictures of themselves, with both the most frightening and beautiful reflections.”