MJR Presents is pleased to announce the return of UK indie royalty The Magic Numbers for the first time since their 2010 Splendour in the Grass appearance and 2006 Big Day Out tour.

Their critically acclaimed album ‘Outsiders’ will also be released in Australia for the first time on Friday, November 16.

The four-piece comprising two pairs of brothers and sisters (Romeo and Muchele Stofart, Sean and Angela Gannon) are known for their unique harmonies, melodic hooks, songwriting craftsmanship and timeless sound.

The band quickly shot to media attention after selling out London’s Kentish Town Forum solely on the strength of their loyal live following, before the release of their self-titled 2005 Mercury Music prize nominated debut album.

As well as four successful albums, not including their soon to be release fifth album ‘Outsiders’, The Magic Numbers have collaborated with a  number of artists, lending their trademark sound and harmonies to the likes of Ed Harcourt, Chemical Brothers, The Divine Comedy, Duke Special and David Kit.

The band will visit four states (many for the first time in over a decade), kicking off their tour in Brisbane on March 21 before winding their way across the country through Melbourne, Sydney, Adelaide and Perth.

TICKETS ARE ON SALE
FROM WWW.MJRPRESENTS.COM 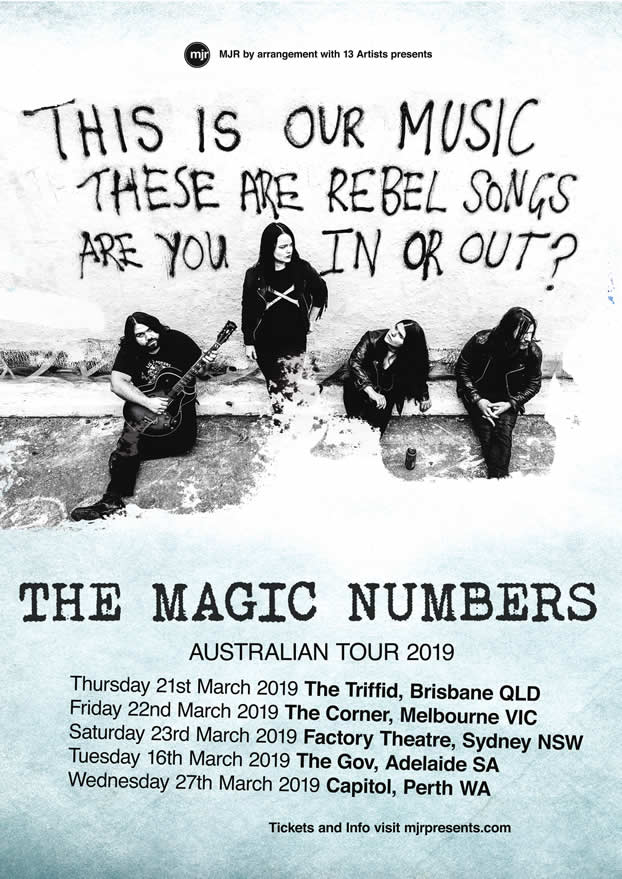