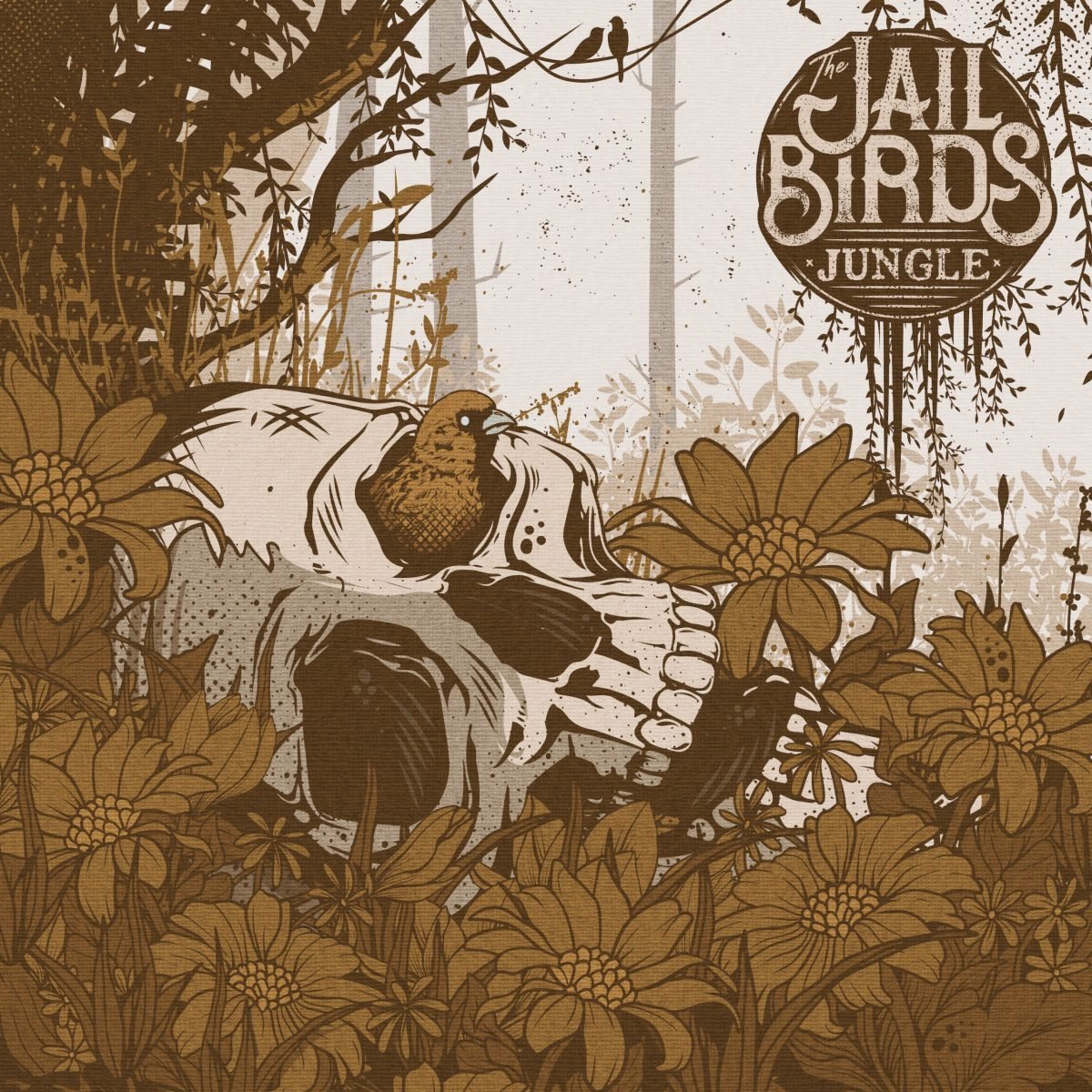 THE JAILBIRDS release a new EP ‘Jungle‘ and new single ‘The Jungle’ out on Golden Robot Records.

Canadian The Jailbirds’ highly anticipated sophomore EP Jungle is out now via Golden Robot Records! To celebrate, the band has also dropped a new single from their EP ‘The Jungle’.

The jungle is a collection of 5 songs each unique in their approach to the subject of depression, anxiety, and substance addiction, but cohesive in their theme. Songs like “Dull My Brain”, and “Watery Grave” bring charisma and energy to the fore as they tackle substance addiction. Whereas tracks like “Jungle” and “I Will Move On’’ are dark and gritty but hopeful in their lyrics and melody as it delves into the topic of anxiety and depression.

Jungle, when listened to front to back, is a linear story. The tracks on the EP plant the listener firmly in the shoes of a person struggling for the conquest of their own mind; their life has become a duality of love and hate. Step by step (song by song) the listener learns the story of a person battling self and substance, constantly shifting in their resolve to overcome their depressive and anxious mind.

Calling up inspiration that spans across multiple eras and sounds, THE JAILBIRDS have created a potent blend of hard rock, and modern rock that is at once both nostalgic and fresh.

JUNGLE TRACK BY TRACK:
‘Dull My Brain’
As the seconds tick in, Jungle roars to life with ‘Dull My Brain’, a track equally as upbeat and energizing as it is desperate and frantic. It outlines the person’s battle with substances and their decision between depending on it or despising them. With classic rock-inspired guitar riffs and 80’s hard rock style vocals ‘Dull My Brain’ is the tangled and beautiful foundation of Jungle’s story; the love-hate relationship between depression/anxiety and addiction.
‘The Jungle’
Though the record touches on real issues of real people, some of the tracks off the EP are fiction with roots in reality. The second song and title track, ‘The Jungle’, is one such song. A metaphor for a mind turned against itself, ‘The Jungle’ is vivid in its lyricism as it pulls the listener further along in the story. Trapped within their own head, the subject of the song is overcome by anxiety and depression as they try desperately to find the key to normalcy. With a bristling chorus and a lonely, melodic verse, ‘The Jungle’ is the all-encompassing feeling of anxiety.
‘All I Need’
Bringing a hopeful and romanticized feel to the record, the third song ‘All I Need’ is the subject of revival, of finding something or someone worth changing for. ‘All I Need’ brings listeners across the sea to a place of imagined utopia. Across the sea, the character of the story could overcome his addictions, anxieties, and depressions by finding love and relationship. Taking cues from riff rock, the song is a wave of catchy hooks and upbeat vocals that doesn’t let up until the final chorus. In the culminating seconds, the tone grows brooding and dark once again, foreshadowing the unexpected turns in a hopeful situation.
‘Watery Grave’
‘Watery Grave’ is the second last and most stylized song of the Jungle EP. The track plays off the previous theme of ‘All I Need’, where, when crossing the sea to a better place, the love the character thought he knew, turns out to be menacing and hurtful. The song portrays this twist of love with the story of a sailor and a mermaid; a person who is addicted to loving someone who keeps hurting them. The track culminates with a violent realization that the Mariner had been led too far out to sea. The woman he thought he knew had lured him to his ‘Watery Grave’.
‘I Will Move On
Bringing Jungle to a close, ‘I Will Move On’ is a song about defiance in the face of adversity, and gaining the confidence to keep going, living alongside your anxieties, depressions, fears, and insecurities. Loud and aggressive guitar tones, soft and crisp acoustic/clean guitars, powerful drums, eerie vocals, and chilling harmonies blend to create a feeling of bottled emotion now released. The verses are haunting and the message is clear; we struggle. But the message in the chorus is equally as clear; we persevere. No matter the struggle, we rise to meet our demons. One day, one step at a time.

ABOUT THE JAILBIRDS
Over the course of the last 5 years, The Jailbirds have cut their teeth on the road, gaining experience touring and performing extensively across Ontario and Quebec, demonstrating on stage and in the studio that they’re a band you simply need to hear.
Not long before the release of their debut EP The Black River, the band was nominated for and won Best Rock Band at the 2018 Mississauga Music Awards. Since their initial release, The Jailbirds have drawn comparisons to the likes of Black Sabbath, Soundgarden, Royal Blood, and Monster Truck. With a sound that is equally rooted in the rock and roll of today as it is in that of the ’70s and ’80s, The Jailbirds have established themselves as one of the most promising up-and-coming bands Canada has to offer.
During 2020 and into 2021, The Jailbirds have released multiple singles, earning themselves a place on Spotify’s Hard Rock Playlist, and cultivating a strong global following in the wake of songs like: “Watery Grave”, “I Will Move On”, and “Dull My Brain”. These songs are a lead-up to the band’s sophomore EP release, Jungle. Heavy-hitting right out of the gate, Jungle will be released mid-spring 2021, and building on the foundational sound created in The Black River is an EP with a story to tell.
The Jailbirds have received strong critical acclaim throughout the last few years, including being featured on Hamilton’s Y108 Rocks! and Oshawa’s 94.9 the Rock. With big plans in the works, The Jailbirds are working their way toward a bright future in the music industry; this is a band you must pay attention to.