With dates in Glasgow, Cardiff, Manchester, London and more, the tour will follow the release of hotly anticipated new single: “King of the Disco” (out 27th May 2022, via It’s Creation Baby).

With a guest DJ set from Alan McGee across multiple dates, further support sets come from acts including Mark McLean, The Head-Up Displays, Dirty English, Zoe + Linnie and others – full details can be found below.

Tickets for all dates are on sale now here.

Released 27 May, The Gulps’ upcoming second single, “King of the Disco” is a bubbling petri-dish of rock, pop and disco influences that pulsates with a raucous, live-ready energy and an all-out party atmosphere.

With its beats and grooves overseen by the legendary Danny Saber (Black Grape) on mastering, the resultant track is a swirling indie-disco earworm landing just in time for manic summer nights under flashing lights and Dyonisian blow-outs on sticky dancefloors.

Inspired by post-Covid craziness and the exhilaration of being set free from lockdown, frontman Javier Sola says of the single:

“King of the Disco” is about instigating partying, hedonism and chaos and losing control. Everyone was sporadically locked up over the last two years, so this track is about celebrating the moment you were allowed onto the dancefloor again; dictating craziness, and spitting euphoria and absolute mania.”

Confident and heady with an infectious dance undercurrent enough to tip any room on its head, the single arrives in the wake of the quintet’s recently signed publishing deal with Mike Smith and Downtown Music.

Ready to take the summer airwaves by storm, “King of the Disco” arrives as the thrilling follow-up to ‘“Stuck In The City”, a single which has already seen The Gulps earn key support from the likes of BBC Radio 6 and Radio X and many more. 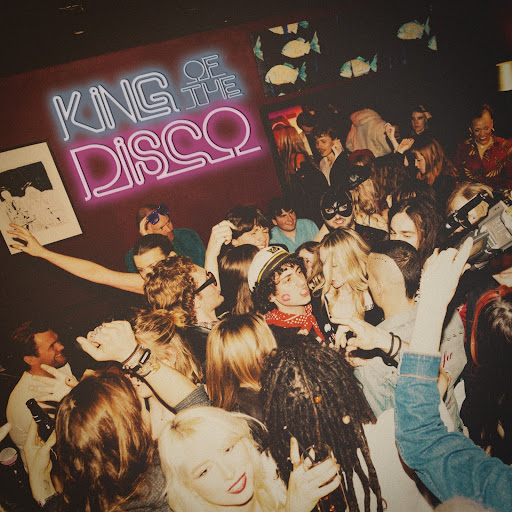 Owning a shared philosophy that “music is everything”, The Gulps are a band who are unafraid of a grand statement or to speak their minds. From their limited shows and releases so far, the band have earned a reputation for making insurgent alt-rock masterclasses that rage against the injustices of our corrupt and ailing society, while flying the flag for a new era of rock’n’roll.
Hailing from all four corners of Europe and the Middle East, The Gulps are: frontman Javier Sola (Vox) and guitarist Juan Carlos Ruiz (both from a  small town in La Rioja, Spain), bassist Simon Mouchard (from Nantes, France), rhythm guitarist Francesco  Antonio Buffone (from Calabria in southern Italy) and drummer Raoul Khayat (from Beirut, Lebanon).

Attracted to the UK like moths to its creative flame, the quintet arrived in Camden from their separate corners of the globe and magnetised to one another with one electrifying vision: “We came here to be f**king rock stars” says Harry.
Officially forming in 2019, The Gulps gained instant notoriety on the live stage, with each performance hallmarked with its own insanities: from stage invasions and fights with security, to stories of almost scalping a fan whose hair got caught in a flailing bass guitar. Picked up by the legendary Steve Strange as his last discovery before his untimely passing, the band were then signed by Creation Records legend Alan McGee to his It’s Creation Baby label last year.

With a recent online campaign for UNILAD in partnership with IBIS Hotel Group under their belts, alongside a sold out flexi-disc vinyl run in collaboration with Discos Bora Bora, The Gulps are quickly marking themselves out on UK turf as firm ones to watch.

With two SOLD OUT headline shows in Spain under their belt this year, plus major support slots with the likes of ASH, Cast, Carl Barat, Skinner Brothers and Keir around the UK, The Gulps are now set to bring their untameable live act to UK headline tour of their own this June.

Listen to The Gulps on Spotify here: https://spoti.fi/36hRPag 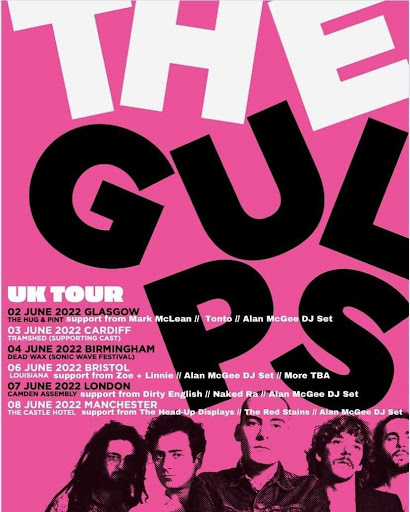