The Frights by Rowan Daly

Today, The Frights share the music video for “Kicking Cans” via Atwood Magazine. The track appears on their fourth studio album, Everything Seems Like Yesterday, which was released digitally last month. Vinyl and CD of the album is available for pre-order via the band’s website and will be in stores everywhere on March 13.

“This was the first song I wrote for what eventually became Everything Seems Like Yesterday,” shares vocalist and guitarist Mikey Carnevale. “Right off the bat, I figured this couldn’t be a Frights song. And I was so satisfied that I wrote something for the sake of simply writing it. No expectations and no nerves about what people would say! I hadn’t done that in years. I was mistaken however.”

Everything Seems Like Yesterday first took shape through a handful of songs vocalist/guitarist Mikey Carnevale wrote on acoustic guitar back in fall 2018. Carnevale originally intended to release the material as a solo album, but had a change of heart upon sharing his new songs at a series of shows in San Diego and L.A. After receiving a unanimously positive response from his bandmates, he began to see the songs as more of a natural evolution of The Frights. Carnevale enlisted bassist, Richard Dotson, as producer and the two set off to record at Carnevale’s grandmother’s cabin in Idyllwild, CA. The pair recorded the record in sequence over the course of one week. The record features a wide array of ambient sounds and the use of real-life objects around the cabin as instruments; glasses with water in them, leaves, pots and pans, a ringing phone, etc.

Everything Seems Like Yesterday, documents a particularly challenging year of Carnevale’s life. It starts with “24” – The Frights third studio album, Hypochondriac, was released on August 24, 2018 (Carnevale’s 24th birthday) – and ends with “25”.  “A lot of these songs are about friends who are gone now, either in the sense that they passed away or that we don’t speak anymore,” Carnevale points out. “Our songs have always involved some kind of looking back over the past, but this one feels like the first time where I’m dealing with those situations and growing from them.” 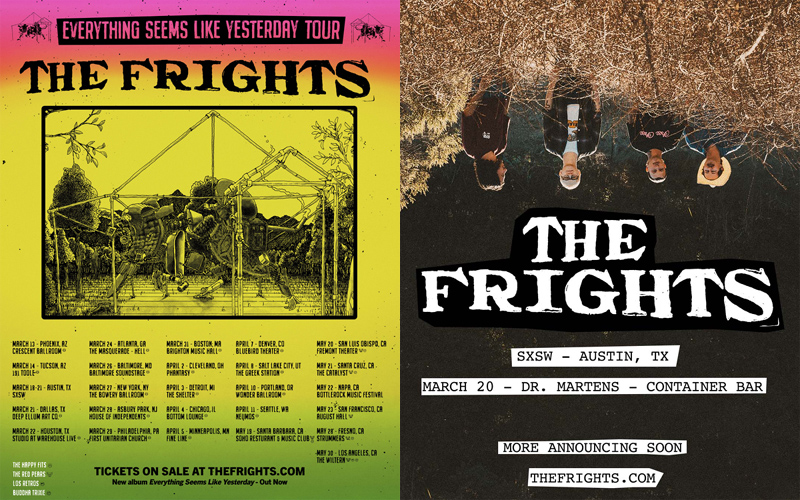