Search
Home
News
The Eternal – August 2019 European Tour Announced
Australian progressive melodic doom band The Eternal have announced their first run of European shows in ten years. The band will do select dates in Hungary, Netherlands, Belgium, Sweden & Finland with a fantastic line-up of bands including Vetrar Draugurinn & Red Eleven. The Eternal will kick off the tour with an appearance at Fekete Zaj Fesztivál in Hungary, where they will perform full electric and acoustic sets. A tour not to be missed!
17 August Hungary Heves Fekete Zaj Fesztivál (Full Band Performance)
18 August Hungary Heves Fekete Zaj Fesztivál (Acoustic Performance)
21 August Hungay Budapest Dürer Kert w/ Clue, Mert & More
23 August Belgium Bree Ragnarok Live Club w/ Vetrar Draugurinn
24 August Netherlands Den Haag Musicon w/ Vetrar Draugurinn
25 August Sweden Stockholm Ardbeg Embassy (Acoustic Performance)
28 August Sweden Stockholm Pub Anchor w/ Neuronaut
29 August Finland Helsinki Henry’s Pub w/ The Phantom of Phobos
30 August Finland Lahti Torvi w/ Sarvas & T.P.O.P.
31 August Finland Jyväskylä Freetime w/ Red Eleven
The Eternal have released their 6th full length studio album ‘Waiting For The Endless Dawn’ through Finnish label Inverse Records in August 2018. Featuring 75 minutes of dark melancholic progressive influenced Doom Metal including the epic 20 minute single ‘The Wound’. The band spent over 3 years writing and recording what can be best described as the bands darkest & heaviest album to date.
The album has been receiving rave reviews internationally and also finished in several ’Top 10 albums of 2018’ lists on major metal sites around the world. ‘Waiting For The Endless Dawn’ is now available on all major online services such as Spotify, iTunes & Apple Music through Inverse Records.
http://www.the-eternal.com
http://www.facebook.com/theeternal
http://theeternal.bandcamp.com
https://www.instagram.com/theeternalofficial/
Digital Links:
Spotify: https://spoti.fi/2nIAmC7
Apple Music: https://apple.co/2OFCVAk
Deezer: https://www.deezer.com/us/album/67539072
Bandcamp: https://theeternal.bandcamp.com/
Compact Disc: http://www.the-eternal.com
Videos:
Rise From Agony: https://www.youtube.com/watch?v=RXhFL3HA52k
The Wound: https://www.youtube.com/watch?v=srmabATLvgw
In The Lilac Dusk: https://www.youtube.com/watch?v=3hvpLEC2h-k
“If you’re looking for something to blow you away, look no further than Waiting For The Endless Dawn. This is a truly exceptional piece of work.” 10/10 Soundscape Magazine (UK)
“Doom metal hasn’t sounded so very intriguing and adventurous for a long time, actually I see that rare are the bands in todays doom metal scene who have the guts to create something that transcends the genre and at a certain point reinvents it.” – 9.5/10Terra Relicta (SI)
“ ‘Waiting For The Endless Dawn’ is a genuine album that goes beyond genres and manifests pure beauty.” – 94/100 Lords of Metal (NL)
“This album is quite magnificent. For some it may be a little much to take in in one hit, some may find it a little overwhelming, but be patient and persist with it, for the rewards are glorious.” – Metal Obsession (AU)
“Waiting for the Endless Dawn” is worth it for “The Wound” alone. That track is absolutely incredible.” – 8/10 Progressive Music Planet
“This album is just amazing. For some it may be “too much” to sit down and listen to a record of such duration, but I want you to believe me, it is worth the most! In the end you will just be enchanted…” – 9/10 Greek Rebels (GR)
“In my opinion The Eternal are a very great sounding progressive mixture of dark, doom and goth metal and if you are a fan of those musical genres, you should check out this band.” – 8/10 Doomed to Darkness
“…With their ability to safeguard innocence in a maelstrom of misery is what should truly be applauded in Waiting for the Endless Dawn.” – 8.5/10 RTMB Music
“Waiting for the Endless Dawn” is an album that cuts deep inside the body and remains a long, painful scar. It’s of great splendor.’ – 10/10 Obscure (CZ)
“This is highly recommended if you love well crafted subtle music with a metallic edge.”20/20 The Rocktologist
‘The Eternal have proved once more with Waiting… that they have the confidence in their own abilities that allows a band to make their music unrestrained by the need to meet industry mores or listener peccadilloes halfway. They stand or fall by the music they create, willingly, and on this record they stand in triumph. This album is hard work, yes, but it’s work worth doing.’ – Sentineld Daily (AU) 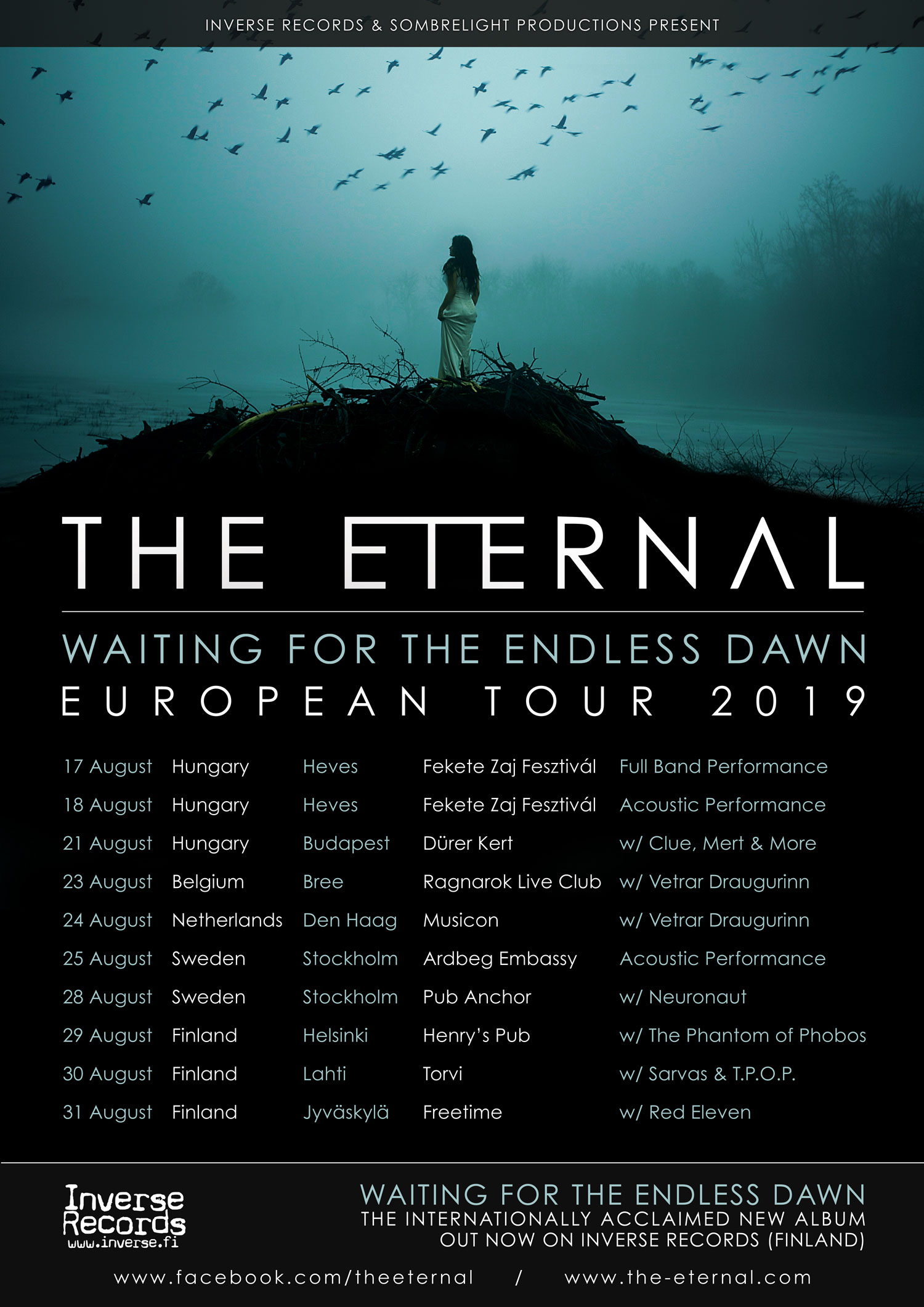