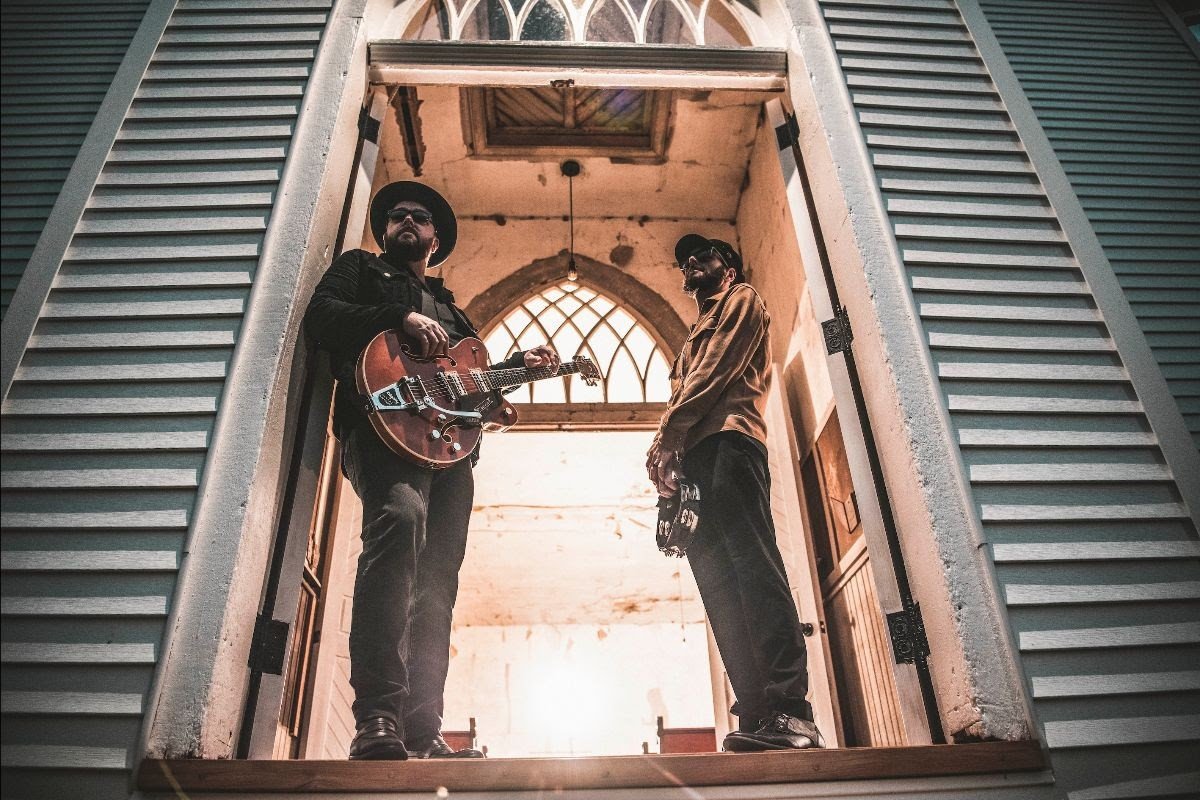 Indiana duo The Cold Stares will release their new album Heavy Shoes on 13th August via Mascot Records (Black Stone Cherry, Crobot, Monster Truck). Ahead of this, they have revealed the video for “In The Night-Time”, which you can watch here. They’ve also announced shows for this summer at The Black Heart, London and The New Adelphi Club, Hull for 22 and 23 June.

Their story alone would be enough for a drama series – cancer, suicide, betrayal, divorce, loss, self-identity crisis, survival, and ancestral skeletons. Write about what you know, they say.

There’s a richness running through the songs with dark, multi-layered narratives that course through every twist and turn. Dirty fuzzed-up rock and roll meet blues, garage, desert rock and a Southern Gothic sensibility. Sombre storytelling is etched into their songs with unflinching honesty. For Chris Tapp and Brian Mullins, authenticity is their hallmark.

The Nuggets-era psychedelic garage-rock “In The Night-Time” is the band striving for something more unique and is inspired by the southern gothic city of St Augustine, Florida. “The whole city is a graveyard. So many Spaniards are buried there,” singer-guitarist Tapp says. “When you’re walking the streets, it’s like you’re walking on the graves. I was visualising walking late at night, with things in the shadows coming alive, and It’s joyous.”   The day of the dead inspired narrative and visuals ties into the incredible cover art by Corey Booth (Rick & Morty) which highlights that darkness doesn’t need to be menacing, it can be beautiful too.

“I’m writing from the point of Edgar Allan Poe and William Faulkner. It needs to have weight to it,” he explains. “There’s not really anything that bothers me to talk about. When you don’t allow yourself to be human and say what’s happened to you, then you make other people that are going through tough shit think that they’re alone.”

Tapp hasn’t been dealt the easiest cards in life. Aged ten he discovered he was adopted, “for a long time, I kinda felt I was alone.” His Grandfather, who he “emphatically loved”, was a significant influence. “He dealt with depression his whole life. Music brought him joy. Because he valued it, it felt natural to me to value it.” He ended up taking his own life, and it was Chris who found him, “it was difficult then, and it’s been difficult since,” he says. “Ninety-nine per cent of the time, he was laughing. But he had this dark side, and maybe there’s a little bit of that dark side in me.”

“That’s a heavy component of my life, and that creeps into the songs. It’s sometimes easier for me to think about it in a song with characters than it is for me to just think about it.”

As a child, his grandfather told him about his great-grandfather, who ran moonshine during prohibition. When no one in the family would discuss that period, he decided to go to do his own research, and discovered that during this, the local Sheriff and Deputy visited his great-grandfather’s house and assaulted his great-aunt.  To protect his family, the next time, he hid under the porch until the Sheriff and Deputy returned. He then shot them both dead on the porch. He spent six days in jail and was released. This trauma shook the family and Tapp lived in that home during his twenties. “My great-aunt lived to be 103 and, just before she passed away, in the last couple of years, she started to talk to me about it.”

Tapp was diagnosed with Stage 3 Cancer in 2009 and given six months to live. 18 months of radiation and chemotherapy followed. “Now I feel like I’m saying what I want to say a little bit more concisely and elegantly,” he concludes.

Recorded largely at Sam Phillips Recording Studio, Memphis – with the remaining at their studio in Indiana – this Memphis vibe has seeped into the record. How could it not – the music, the history, the people, the Mississippi river. Mixed by Mark Needham (The Killers) and mastered by Andy Vandette (Beastie Boys/Smashing Pumpkins), Heavy Shoes is their heaviest record yet.

“I tend to try to write like you’re reading a book. It’s descriptive, but also visual,” he says. He solemnly wails about bad luck on “Hard Times,” the first single from the album. They then run a gamut of themes; addiction (“Save You From You”), emotional torture (“Prosecution Blues”), destructive relationships (“Heavy Shoes”) and manipulation (“Election Blues”). The doom-laden, desert-rock “40 Dead Men” centres around an unnamed soldier who destroys his surroundings just to get home. “It’s a metaphor for being sucked into a fight, be it politics or religion, and focussing on going back to the thing you really love.”

“There were a million opportunities for us to bail. We’ve both been through divorces, and I’ve been through cancer. We’ve been through tough times and never been given anything on a silver plate. We’re just a blue-collar American rock and roll band,” he continues.

Now on their fifth album, the road-worn warriors have crisscrossed the US, playing the Mercury Lounge to the Viper Rooms, and played with Rival Sons, Spoon, Grand Funk Railroad and Thievery Corp. .

You want authenticity, take one long cold hard stare at these two. The Cold Stares are a rock ‘n’ roll band, but they take a sledgehammer to the foundation to reveal the cracks that are suppressed within it. With that, allowing themselves to be raw and open to show that, we are not alone.