Also watch the split-screen video “New World Symphony” which was released in April, in occasion of Mike Portnoy’s Birthday: https://youtu.be/WpmFUL-zTvk

As with Vivaldi Metal Project’s previous release, the new album will showcase many incredible instrumentalists, vocalists, choirs, and orchestras from all across the globe. Some of the artists announced so far include such sensations as Mike Portnoy (ex-Dream Theater, Sons of Apollo), Steve Di Giorgio (Testament, Gone in April, Quadvium), Dirk Verbeuren (Megadeth), Mike Terrana, Rolf Pilve (Stratovarius), Gerit Lamm (Xandria), Nick Z Marino (Y. Malmsteen), Melissa Ferlaak (ex-Visions of Atlantic), Roberto De Micheli (Rhapsody of Fire) and many others.

Vivaldi Metal Project started a crowd-funding campaign to get support in the production of the new album. Visit https://gogetfunding.com/vmp2 to find out how to get involved, and receive a reward for your donation. 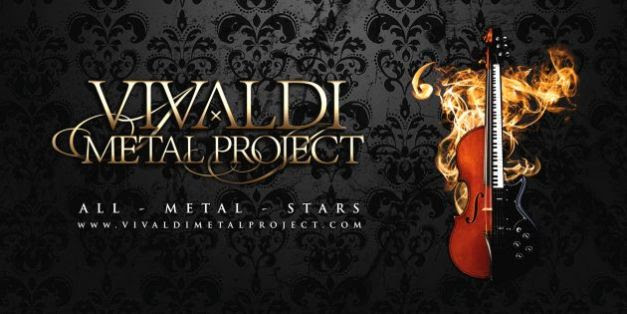 The fretless guru, STEVE DI GIORGIO doesn’t need any longer introductions, as he is widely renowned as a pioneer on the fretless bass in heavy metal music, being the bassist of TESTAMENT, QUADVIUM, DEATH and SADUS, among others. Within his genre, STEVE DI GIORGIO is respected for his playing skills, versatility and incredible technique. He has more than 40 studio album recordings and over 20 years of touring the world.