Jason Bittner wrote also a long accompanying message:
“Well there’s a bunch of explaining that goes along with this video and a history of sorts…….after the whole pandemic started, I contacted my longtime friend and former bandmate Felipe Roa (Shadows Fall touring guitarist after Jon joined Anthrax) to see if he wanted to do some “quarantine covers” and I proposed “Wake Up Dead” by Megadeth, and by now you have seen that one.  At the time of discussion Felipe asked if I wanted to do a Death tune, knowing that they are one of my all-time fave bands as well as his, and we used to jam Death in soundchecks all the time. Initially my first reaction “ummmm, I don’t know if I want to do that much WORK, hahaha,” but as soon as he said “Overactive Imagination” I was in – I used to jam this song all the time in my formative years but I did wonder if I could still pull it off.  After a couple days of shedding and trying to be 25 again, we had a completed drum track, which I even sent to my pals (former Death drummers) Richard Christy and Gene Hoglan for “approval”.  Sean already gave me the green light from Heaven. At first we were just going to do it the two of us, but I had a plan.  Here’s some crazy trivia – while I attended Berklee College of Music in the 80’s, I played in a band with Bobby Koeble and we actually recorded a few original songs wayyyyyy back in the late 80’s.  Bobby later went on to join Death for the Symbolic album and still plays in Death to All.  After not speaking for over 30 years I hit up Bobby, reconnected (which I’d been meaning to do for years) and asked him if he wanted to do this tune with us and he said yes right away.  He asked who was playing bass and I told him Felipe probably would do that too………unless…….“Unless what? Unless I can get Steve to do it……So the next point was to contact my friend, and one of the greatest bass players out there, Mr. Steve DiGiorgio to see if this could be possible.  At first Steve wasn’t’ sure if he could commit due to his many projects, so we actually asked our friend Bill Bodily (Ex- Toxik, Flotsam and Jetsam touring bassist) to do the bass since Steve wasn’t available.  In the meantime, I had sent Steve the track after we put Bobby on it just to “make sure” he couldn’t do it. I had a feeling if Bobby committed, Steve would follow.  A week later he did send his tracks, so first off THANK YOU to Steve for going above and beyond in such a quick and timely manner, and also to Bill for being our “backup”, sorry it didn’t work out – next time!   So there you have it folks, we put a lot of work into this one because we absolutely love this band in every incarnation, and I am proud to say that I am friends with a lot of the people who have played in their ranks so…….so this one goes out to……Terry Butler, James Murphy, Richard Christy, and Gene Hoglan.  Lastly, a moment to remember past members Scott Clendenin, my former bandmate and friend Ralph Santolla, my longtime friend and mentor Sean Reinert, and lastly the one and only Chuck Schuldiner for being one of the greatest songwriters to ever grace the Metal world!! Enjoy and share!!” 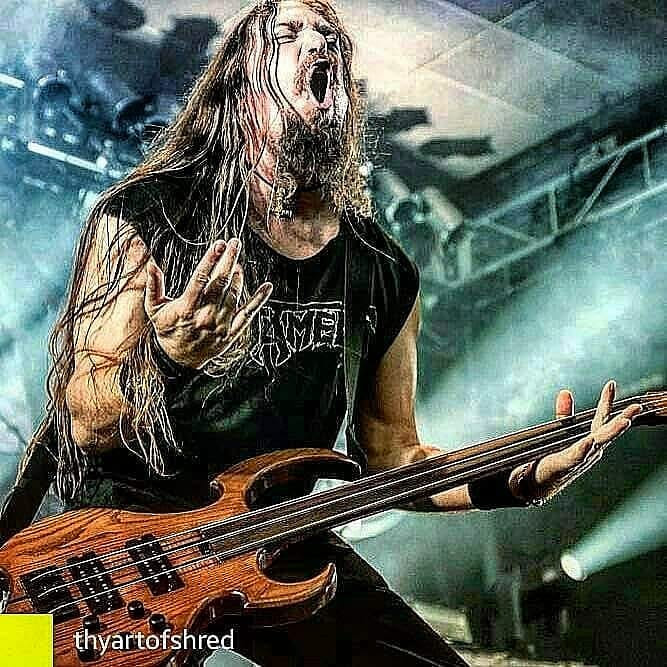 The fretless guru, STEVE DI GIORGIO doesn’t need any longer introductions, as he is widely renowned as a pioneer on the fretless bass in heavy metal music, being the bassist of TESTAMENT, DEATH and SADUS, among others. Within his genre, STEVE DI GIORGIO is respected for his playing skills, versatility and incredible technique. He has more than 40 studio album recordings and over 20 years of touring the world.