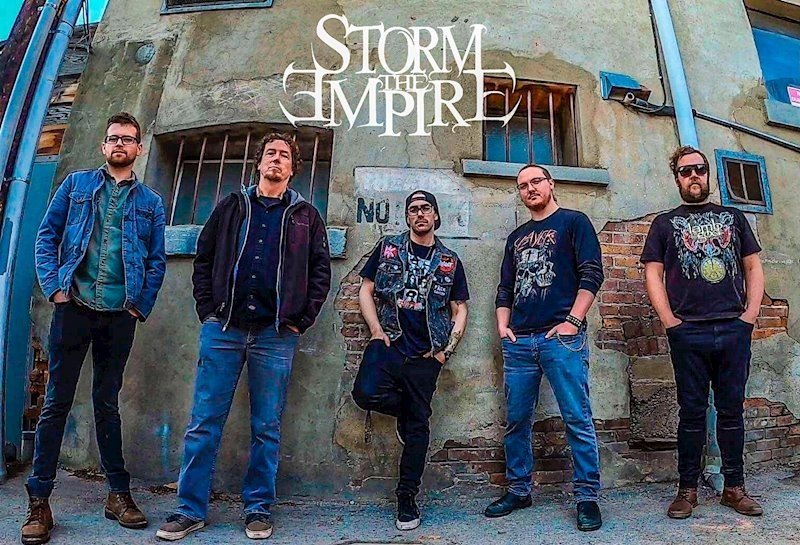 STORM THE EMPIRE
RISING METALLERS DETAIL NEW SINGLE & MORE!
Canadian-Anglo metal outfit STORM THE EMPIRE are rapidly carving a prominent name for themselves, as they launch out of the underground and aim for the jugular, armed with their hard-hitting new single and video Leap Of Faith, out now – //youtu.be/c3Bwmewz6W8 .
Born in 2019 and coming at you from Kelowna, British Columbia, Canada, STORM THE EMPIRE are comprised of Brit national, Dale Henshaw (Lead Guitar), and his Canadian counterparts: Jake Bilash (Rhythm Guitar), Norm Mathers (Bass and Backing Vocals), Robb O’Day (Lead Vocals), and Andy Ashley (Drums). By harnessing influence from past metal masters and contemporary heavyweights, STORM THE EMPIRE produce music that is aggressive, formidable, and compelling. With the use of strong melodies and talented musicianship, the industrious quintet locked themselves down in the rehearsal room to methodically chisel out their incoming EP, Within Chaos, There’s Beauty.The record is the band’s first official release and includes four singles, and has been completely recorded independently by drummer Andy Ashley.
Prior to the release of the EP, the Canadian metallers will release their explosive new single, Leap Of Faith, which is a full-throttle surge of melodic metal laced with stunning vocals and monstrous guitar work. The guys remark about the track: “‘Leap Of Faith’ is about the battle of one’s inner self, the choices we have to make that we may not always want to do; and about the struggles of personal relationships due to this. Everyone has dealt with something along these lines at one point or another, and it helps you feel at ease.” With the band’s fanbase on the rise and widespread plans to tour extensively, the stage is now set for the band to take the masses by storm. STORM THE EMPIRE have the drive, diversity, comradery, and passion to be a prominent force within the metal scene for many years to come.
//stormtheempire.com/
//www.tiktok.com/@stormtheempire
//www.instagram.com/stormtheempire
//www.facebook.com/StormTheEmpire
//open.spotify.com/artist/7lHJgfF2M6fh0LxXNPfaOm
//www.youtube.com/channel/UCklmIM3bnmPaHoi1t7v70FQ