“If it’s your introduction to the Philadelphia hardcore band, get ready for a maelstrom of noise. Stick around and find yourself receiving the message.” – MTV News

Conceptualized over the course of 2016 to 2021, Diaspora Problems was recorded in an unfinished warehouse and the band’s practice space during the hottest parts of summer 2021. The self-produced album explores an artist and individuals’ self-doubt and self-hate, past traumas that can only be worked out in adulthood, financial instability and how it affects an artist, the effects of institutional and state violence, and the power of community that delivered Soul Glo through each struggle the band has endured from their inception and beyond.

Soul Glo’s lyrics are uncompromising, written to raise awareness of social justice issues and designed to make you look inward. Lead single, “Jump!! (Or Get Jumped!!!)((by the future))” examines the disposability of Black art and its creators, and the mental anguish of having “big plans” in a time when a future is not guaranteed. Switching gears to pure noise rap, “Driponomics” finds vocalist Pierce Jordan spitting politically charged bars, discussing creative methods of how to “get by and get fly” amidst our current economic state. Over screeching distortion and heavy bass, a featured verse from Philly native, Mother Maryrose, is one of the band’s favorite moments on the album.

Fusing hip-hop, hardcore, and punk, the Philly outfit are fearless in their approach and even more ruthless in their delivery. Injecting their colorful narratives into predominantly white spaces, Soul Glo has the scope and ability to transcend outer appearances in hardcore music. We’re at the precipice of a sonic revolution as a higher variance of people find room for themselves and the expression of their lived experience within the genre. With the release of Diaspora Problems, the band is not aiming for it to be the only album like it that exists, but instead one of many entries in a new dawn for rock music. 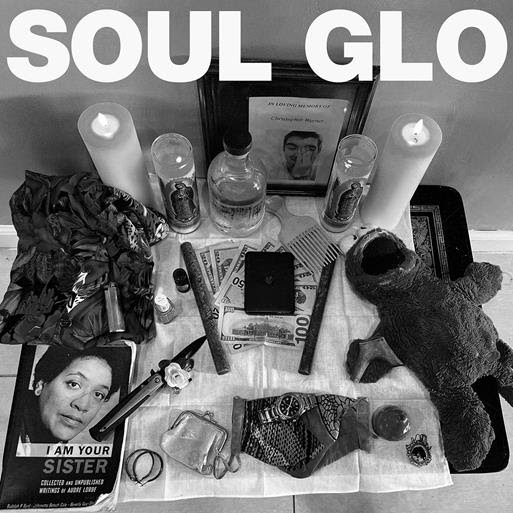