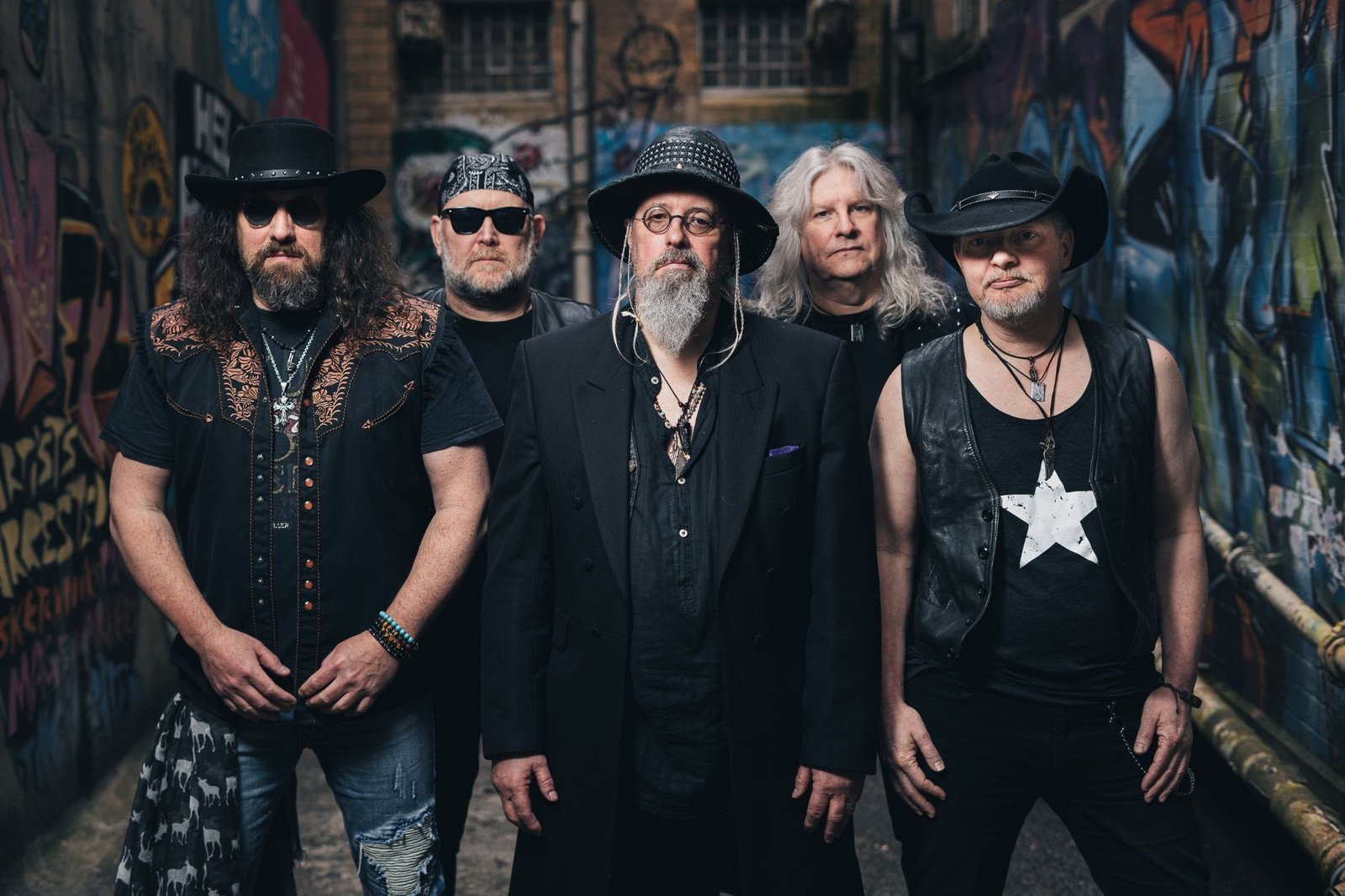 UK Southern rockers Sons Of Liberty release their second album “Aces & Eights” on the 18th of June and it kicks ass big time.

Packed with great rockers, slower ballad styled songs and some tongue in cheek fun that just can’t miss. “Ruby Starr” kicks it all off with some AC/DC style riffs and a killer drum beat, a chorus that will have you singing along to in no time all backed up by Rob Cooksley’s amazing vocals, a tasty solo tops the track off nicely. “Don’t Hide Behind You’re Weakness” is a real southern rocker, a cool picked riff and some excellent gravelly vocals mark this as one of the best tracks on the album. “Black Blizzard” is one of the slower tracks, heavy riffs; pounding drums aided by some seriously cool vocals make this a real earworm. “Beef Jerky Boogie” is a tongue in cheek ode to southern grub but don’t let that fool you or detract from what is a great track, a high tempo affair with great guitars and a blasting drum beat that will have you up boogieing. “Damaged Reputation” is a killer track opening with crashing drums and a buzzing bass that runs nicely throughout the song giving it an extra punch, cutting riffs, excellent vocals and a ripper solo put an exclamation point on the best track on the album.

“Texas Hill Country” is a good old fashioned southern rocker, with a slapping bass, soft drums and nice smooth guitars with a great solo towards the end of the track, a great track. “Fire & Gasoline” screams into life with a bit of reverb and Cooksley giving it a good old lash, a heavy beat kicks the song along, the vocal range of Cooksley is amazing and on show big time here, so much so that at stages you’d be forgiven for thing Brian Johnson is on vocals, the guitars are again on point and a phenomenal solo will take your breath away, another cracker. “Doc’s Remedy” is a quirky song that is that has a travelling circus/medicine show vibe; a bit of a toe-tapper is this one with its funky rhythm.  “I Come In Peace” is a strong ballad with powerful drums and amazing guitars, Cooksley’s vocals are next level here as you can feel every note in his gravelly voice, epic. “Dead Man’s Hand” is a bluesy rocker with a funky riff, kickass drum and bass beat that drive the track, obligatory solo is brilliant if a little on the short side. “Lights Are On” is full-on and in your face, heavy beats with a killer riff that doesn’t let up from start to finish, with a catchy “Lights Are on” repeat you’ll be singing along and pumping your fist in the air, this will slay live. Closing out the album is “Whiskey Is My Vaccine” a slow bluesy number with a southern twang, not a bad way to finish things off.

“Aces & Eights” is out on the 18th of June. This is one hell of an album; if you are a fan of southern bluesy style rock with a kick then this is highly recommended 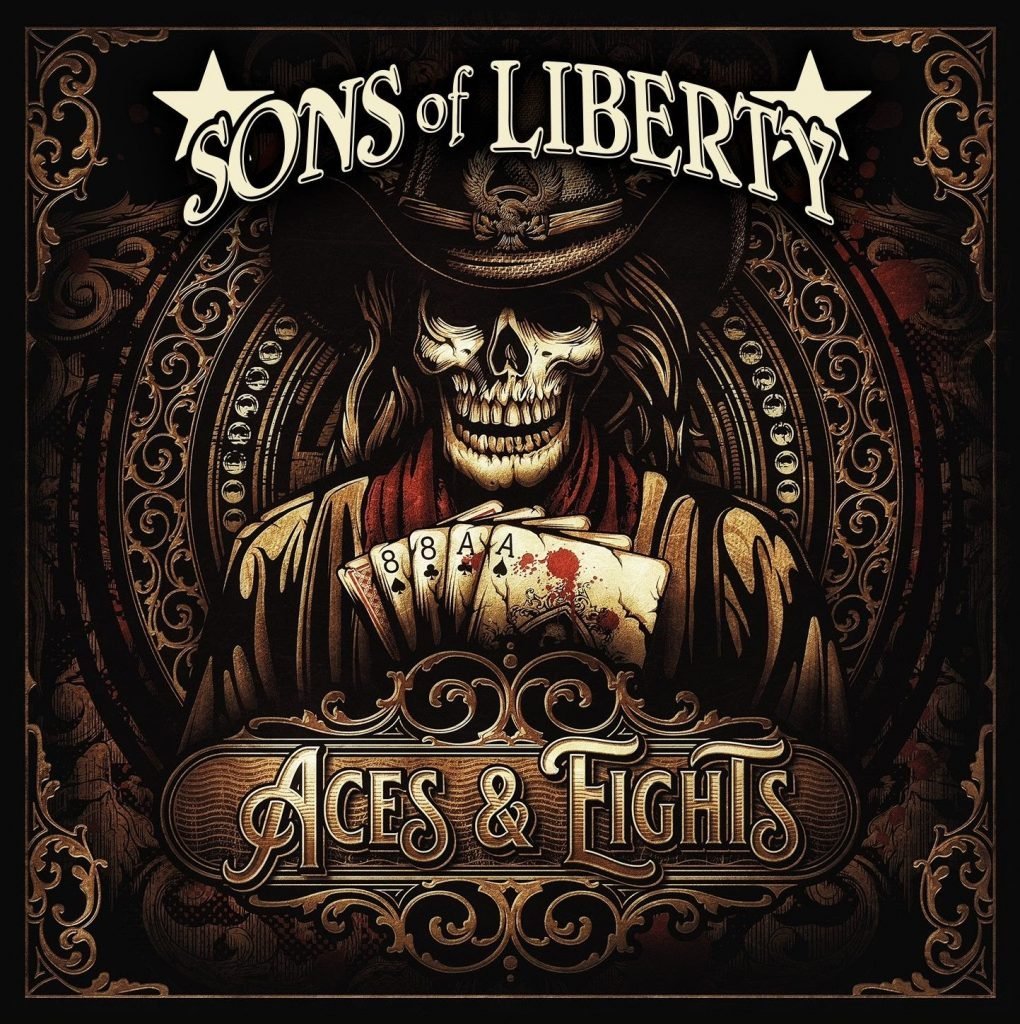 Sons Of Liberty are:

The band have a full UK tour and festival dates throughout 2021 which can be found here: www.sonsoflibertyband.com/tour 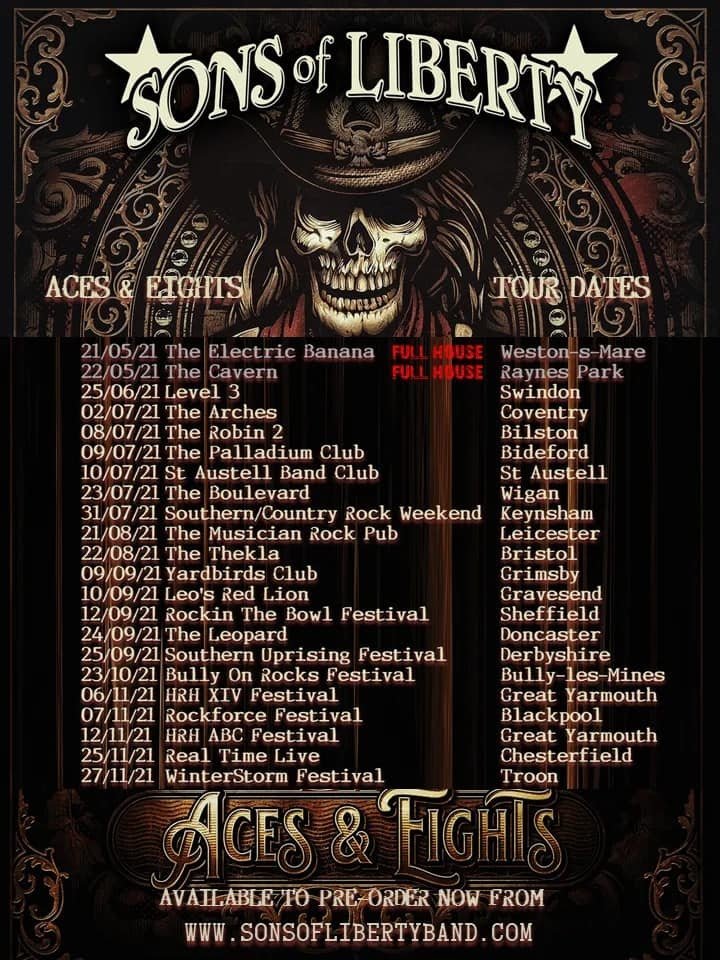