Smackbound is a new metal act from Finland who have recently signed to Frontiers Music Srl and
will release their debut album, ’20/20′, on 8th May. Fans can expect powerful, driving songs,
impeccable musicianship and stunning vocals from this exciting band, as evidenced on ‘The Game’,
a new single that is released today.
‘The Game’, plus three other singles, can be streamed via this pre-order/save link for ’20/20′:
orcd.co/smackbound2020
On what listeners can expect from ’20/20′, singer Netta Laurenne states: ”It is a versatile album
with music for all moods. The songs are melodic and have a great drive. We are trying to clear the
clutter from our hearts and heads and hope that the same process will happen to everyone hearing
the record. It is all about energy in this world and we are trying to keep that energy alive and moving
so that it can reach the listener and have a true impact and connection with them.”
In regard to ‘The Game’ single and the promo video for it, she continues: ”I had this vision for years
about using clay and making these human statues. I once saw a picture with a person with clay on
their face and took the idea from there. It never really fitted anywhere before, but once I had sung
the song and was listening to it, I realised that this is where the idea was meant to be used. It is
honest, brutal, ugly and beautiful at the same time. It shows us, in a way, without any status or ego.
And in this song, that is very important because it is about every human being longing to be loved.
It tells about the hide and seek, the fear of getting hurt and the bravery of trusting love. There is
also a side to the story which probably all of us have experienced: the letdown, the heartbreak.
Opening up to someone only to be brutally broken. Love can be like a Trojan horse, but can we
really ever afford not to let it in? The video was shot in Helsinki by director Owe Lingvall and we
were just laughing our asses off rubbing clay on each other. It was also kind of humbling for us
to be half-naked with one another, back to back, listening to this song about vulnerability. I hope
we managed to make something good.”
The story of Smackbound began in 2015 when Laurenne founded the group, although her voice
can be heard on guest spots with Amorphis, Lordi, Black Sun and Elvenking prior to that.
Classically trained, she has studied pop/jazz and folk vocal styles and is also an actress. Guitarist
Teemu Mäntysaari was the first to join her in the line-up, followed by Rolf Pilve (drums), Vili Itäpelto
(keyboards) and Tuomas Yli-Jaskari (bass). Collectively, they have experience in respected
metal outfits that include Wintersun, Stratovarius, The Dark Element and Tracedawn. Smackdown
immediately started writing songs and launched with the singles ‘Drive It Like You Stole It’, ‘Wall
Of Silence’ and ‘Run’. All three will be included on their debut album.
’20/20’ was recorded at Sonic Pump Studios in Helsinki, produced by Tuomas Yli-Jaskari and mixed
and mastered by Jesse Vainio (Sunrise Avenue, Apocalyptica, Poets Of The Fall).
“Everyone invested their talent on the album. Teemu played great riffs and solos, Rolf banged the
drums like no tomorrow and Vili and Tuomas played some pretty awesome stuff as well. I poured
my heart into the lyrics and tried to sing the songs with grace,” concludes Laurenne.
20/20
TRACKLISTING
1  Wall Of Silence
2  Drive It Like You Stole It
3  Close To Sober
4  Run
5  The Game
6  Those Who Burn
7  Hey Motherfuckers
8  Troublemaker
9  Date With The Devil
10  Wind And Water 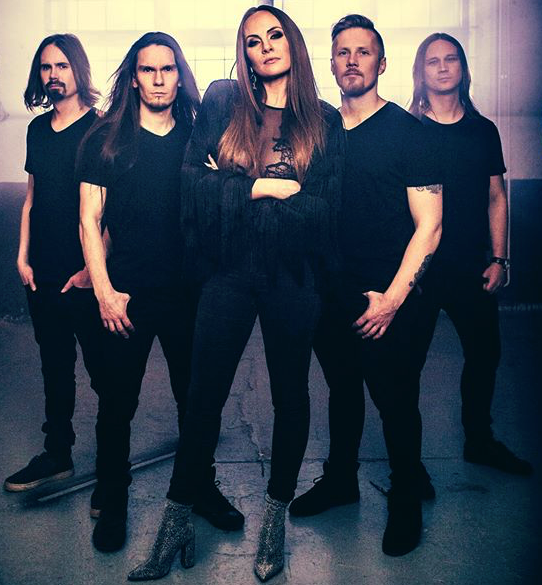 SMACKBOUND
Netta Laurenne – vocals
Teemu Mäntysaari – guitars
Rolf Pilve – drums
Vili Itäpelto – keyboards
Tuomas Yli-Jaskari – bass
smackbound.com
facebook.com/smackbound
instagram.com/smackbound_official
ABOUT FRONTIERS MUSIC SRL
Originally founded in Naples, Italy in 1996 by Serafino Perugino and his father Fernando as a
distribution company, Frontiers has developed into one of the premiere independent rock labels in the
world. Synonymous with quality music from across a broad spectrum of rock genres, the company has
worked with multiple genre heavyweights and fan favourites. Aside from providing a home for classic
artists from the 1970’s/80’s, it also boasts a wealth of young, up and coming talent that, with a savvy
and forward thinking A&R and marketing approach, will be developed into the future of rock and metal.
With a deep commitment to and passion for THE MUSIC and the artists who create it, plus massive
global distribution, sales, marketing and publicity channels, Frontiers is the premiere home for both
established and emerging rock artists.
Head Office: Naples, IT | U.S. Office: Nashville, TN
Subscribe to be alerted when new videos are added:
radi.al/SubscribeFrontiers
Follow the ‘Newest From Frontiers’ playlist on Spotify:
spoti.fi/1rQz5Zm