Wednesday 27th April saw the UK leg of the Skunk Anansie tour come to an end at the O2 Academy in Leeds and what an end it was!

Featuring support acts Holocene and Gen and the Degenerates the night was off to a great start. Holocene are a duo from London with Sian Kelly covering vocals, guitar and keyboard and Matt Williams on drums. They are billed as ‘grunge with a jazz twist’ and Sian’s vocals are really on point, with a lovely moody version of Duran Duran’s ‘Rio’ thrown in for good measure. Closing with their latest release, ‘Kiss Me In The Dark’, there’s definitely a bright future in front of them.

Gen and the Degenerates blast onto stage with lead singer Gen in an impressive black and white chequerboard faux fur coat. They are a real force of nature and make a perfect support for the main act, with Gen’s performance style not completely dissimilar to Skin. Gen commands the stage and creates a good rapport with the audience, with all three guitarists and the drummer fully committing to rocking the night out (I don’t know how the guitarists do not get whiplash with the amount of energy they expend on stage). Running through a set of seven songs, they finish with what Gen claims is their loudest and angriest song, and it’s an absolute banger! With a casual bye from Gen, that’s the end of the support sets.

During changeover and a quick sound check for the headline act, there’s a great moment as one of the crew walks across stage in a pig mask reciting the ‘Three Little Pigs’ nursery rhyme!

Finally, it’s time for Skunk Anansie! Mark, Ace and Cass enter stage first to cheers followed by Skin and the crowd erupts. Dressed in a hot pink blazer with giant 80s shoulder pads and an enormous black-horned headpiece, Skin struts the raised platform at the front of stage like it’s a catwalk, while blasting out ‘Yes! It’s Fuckin’ Political’. This is rock music at its absolute finest – bass, drums and volume cranked up to the highest and feeling the vibrations underfoot.

Powering through the setlist with crowd favourites such as ‘Twisted (Everyday Hurts)’ and ‘Weak’, the band sound as good now as they did in the mid-90s and it’s easy to see how almost 30 years later, they are still selling out shows. Despite most band members being a good bit above the age of 50, you would never know it as they lack neither skill nor energy.

Skin talks effortlessly with the crowd and it’s with genuine disbelief that someone with her powerful vocals can have such a sweet, higher-pitched voice. Before introducing one of their new tracks ‘Can’t Take You Anywhere’, Skin explains how it is important to them as a band to tour whilst releasing new music and not just be a 90s band touring with the same tracks – a comedic mention of Blur at this point raises laughter from the crowd.

As ever, Skin is keen to convey the often-political messages they have become synonymous with before, yet in a way that manages to promote love, happiness and acceptance of everyone having their own beliefs. There’s a couple of thinly veiled jibes at the government before launching into ‘This Means War’, which was dedicated to Ukraine, Syria, Afghanistan and any other countries facing tyranny.

As the night moves on, it’s impossible not to give a shout out to backing vocalist, Erika Footman who was sensational. To be able to hold your own with the powerhouse of rock that is Skin, must be a huge amount of pressure but not once did it feel like she didn’t belong on stage right next to her.

Ending with an encore of ‘Piggy’ and a re-mastered ‘Brazen (Weep)’, Skin then invites both support acts back onto the stage as tonight is the last night of the tour for them and indeed for Skunk Anansie in the UK. Launching into a cover of AC/DC’s ‘Highway To Hell’, the crowd bounces as does everyone on stage, with guitarists from Gen and the Degenerates even joining the mosh pit.

As some of the crowd disperse as the band wraps the night up with ‘Little Baby Swastikka’, there is a beautiful moment where the band pays homage to one of their friends, drummer Taylor Hawkins who passed away earlier this year and the venue sound system opens with ‘Best Of You’ by Foo Fighters. The crowd raise their hands and voices and sing along as all bands stand on the catwalk – it’s a spine-tingling moment and made for an emotional end to a fantastic and memorable night!

The full list of UK and European shows and remaining tickets are available here: https://skunkanansie.com/live-dates

Thursday 14th April
Today, alternative punk rock quintet Gen and the Degenerates announce their Autumn 2022 UK Tour. Following the release of their acclaimed EP ‘Only Alive When In Motion’, described by Rock Sound Magazine as ‘A varied and vital collection of songs that are as defiant as they are deafening’, the announcement comes during their current run with the legendary Skunk Anansie and ahead of performances at The Great Escape Festival and Rewired Festival.

On the upcoming tour, Gen and the Degenerates said:
“We’ve been having so much fun and learning so much on tour with Skunk Anansie. It really has been an opportunity to learn from the best and their fan base are so incredible. We’ve loved chatting to new people every night after shows. We can’t wait to get back on the road for our own headline tour in autumn and show all the new friends we’ve made how a degenerate led party goes down. It’ll be lots of chaotic basement shows, climbing up the walls and hair flying everywhere…” 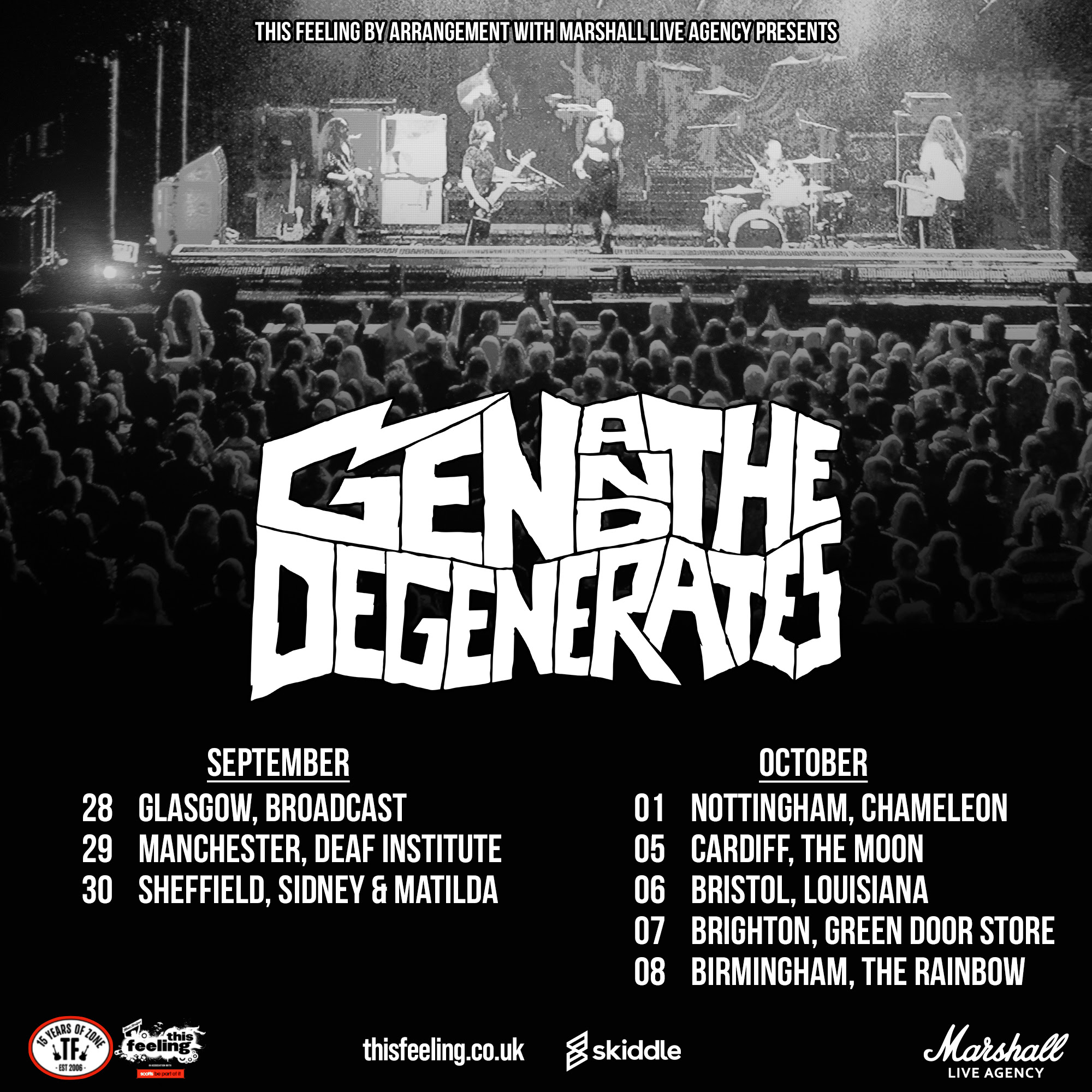 Gen and the Degenerates Online: