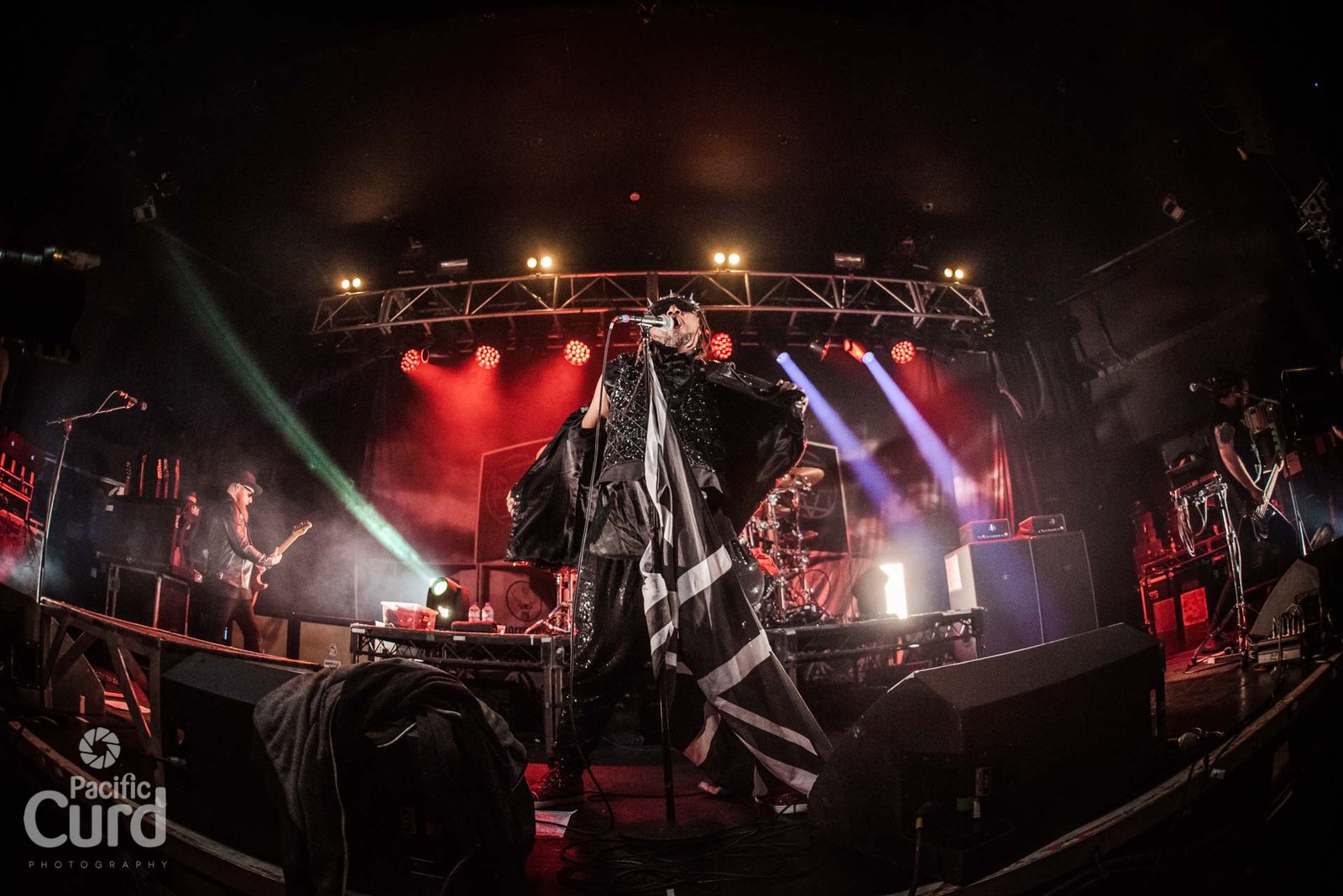 Blasting on to stage and greeting Bristol with energy, melody and a whole host of words, RXPTRS tear through their first song to a two-thirds full venue.  Vroom and we’re into the second track which sees vocalist Simon Roach firing both gruff and high notes with a fair amount of chanting in between.  The music stays loud and heavy with a fast-ish pace but SR slows the vocals down purposely.  “Bristol are you fucking ready?” he shouts.  The headbanging crowd are clearly warming and up for it “Thanks for being here so early with us!” he exclaims.  This band bring (amongst a mix of genres) a bit of a goth vibe to the proceedings which is no mean feat beneath the brightly coloured disco lighting.  The stage positioning of the band is busy – SR, guitarists Ian Chadderton, Harley Watson and bassist Sam Leworthy up front and drummer Mat Capper sitting somewhat hidden behind a neat display of skulls.  There is other band’s kit on the stage already – this is what happens with a 10pm curfew for clubbers! – but the RXPTRS monochromatic outfits of vest tops and floaty shirts tie them together and the band are well-animated throughout despite the shortage of space.  “Bristol you are our home town and this feels brilliant, this is a new song” ‘Demons in My Head’ shows what a set of pipes SR has got and the spoken parts, together with the different pitches convey a mental argument, as does the incredibly fast drumming.

More people are arriving, greeting their long-lost friends with hugs and moving forward to see this band whose set is getting heavier with each song.  There’s another new song, fast again and those axes really grinding in but this time the vocals are kept higher and lighter but still with a billion-word attack-force; this frontman isn’t shy and clearly enjoys whipping up the atmosphere, gloved left hand pointing skyward “We’d like to see some new dance moves from you” he politely requests the crowd oblige; this is always good to see of course but strikes as especially impressive for such an early crowd on a Friday night.  With the final song, ‘You Me and the Devil Make Three’ the bass is spot on again with the guitars accentuating the low vibe.  There’s a dual lead moment that sounds great and proves enough to send an eager crowd surfer over the top careering towards the front.  With cheers and whistles long after their set has ended, it’s fair to say that R X P T R S have netted this.  Find out more at: www.rxptrs.com

Starting with a Blood-Red lit stage, a spacelike voice is heard over the PA.  Drummer Oakley Moffatt launches in with a funky beat.  Vocalist Tobi Duncan quickly introduces the band over the music which is now in full flow with two guitarists Ryan Hyslop, Dann Bostock and bassist James Grayson joining the proceedings.  On with the vocals, which, in this band are melodic but intermixed with some harsher spoken poetry-like lyrics as TD bounds across the stage in his midriff top, playing with the photographers in the pit by leaning in for close-ups.  Hailing from St Albans, Trash Boat is a fresh sounding band, their music is upbeat and there is a lot going on audibly and visually.  There’s an exceptionally exciting crunch to their sound and persona.  ‘Alpha Omega’ is a stress-buster of a song with a catchy little chorus along the lines of “Idiot, you fucking idiot” and it is handily dedicated to the like.  “This next one’s about the news bro” TD casually advises, as DB at stage right mouths along to the words and adds actions between playing.  The song contains an important, clear and concise speech about controlled media whilst the music pumps along.

A blinding cover of Linkin Park’s ‘Given Up’ is rightfully dedicated to Chester Bennington and sees huge crowd participation/ sing back.  The crowd passion continues into a song from their first album ‘Strangers’ with a lot of jumping along.  Chaotic lighting bathes  the band perfectly and OM sits cool as cucumber, blasting the beats out seemingly effortlessly having quickly had to readjust his kit.  The band asked for show of hands at the start of their set to find out who had seen them before – the result being very few – but the floor is now packed.  Introducing the title song from their recent album ‘Don’t You Feel Amazing?’ TD says he loves this song and it gives him strong sexy feelings.  It’s a super-sleazed-up beat with some racy-all-nighter guitar and an echo to the vocals that gets its down and gritty attitude across just as much as the mic-stand strokes. There’s a great crowd response, so naturally, the band decide to play out with a song they consider ‘divisive’; “Why do people always ask about my sexuality…why do you give a shit?…why not ask about my technique?” comments TD.  Is their style political? Maybe but it may more be a case of them choosing common sense over bullshit.   Either way their music piques interest and the resounding cheers before, during and after this song signal a victory for Trash Boat.

Trash Boat are about to start their 8-date Headline Tour on 20th October 2021 visit: www.trashboat.co.uk to find out more about them (and go see for yourself!)

If there’s a word to sum up the crowd tonight it’s ‘ready,’ another might be ‘happy’ it’s far from boring that’s for sure.  Personality abounds as they wait patiently, singing along to anything from Queen to Ramones to ACDC.  Then the moment arrives, the lights dim and the Star Wars ‘Imperial March’ booms from the darkness.  Silhouettes of the band can be seen and are quickly accompanied by cheers.  Arya Goggin is up first behind his raised drumkit, guitarist Mikey Demus next at stage right,  bassist Daniel Pugsley shortly after taking stage left position and sequin-suited singer Benji Webbe completes the line-up centre stage.  The lights go up, Benji’s arm is raised as he drops the crowd a welcome and the band goes straight on in with the performance.  Quite unbelievably, Skindred are about to bring the already sky-high energy up another notch.  The band launch into ‘Rat Race’ with sabre like lights slicing through the haze-filled venue.  The band are bouncing, the crowd are dancing, the lights are flashing.  MD has an air of concentration about him, his shades and hat combo making him appear cool as ice but his playing hot as fire.  Skindred’s sound is unclassifiable; just huge.  Dedicated musicians, twisting and turning in an instant, feeding on the thrill of the moment and loving life.

Participation and enjoyment are a big part of the Skindred experience and BW certainly knows how to conduct an audience.  One moment he’s jumping up on a platform and briefly singing Oasis’ ‘Don’t Look back in Anger’ before growling in with a Skindred song and commanding everybody to “Jump” – they do – the next he’s on all fours before ‘Doom Riff’ then he’s back on his feet again insisting everybody gets their hands up in the air.  “Do we have any lovers of life in the house?  Who has come to celebrate life with Skindred tonight?” he asks, the response: apparently everyone!

The set is like a best-cut remix, leaping from one flashing sensation to the next.   DP handles the samples, then bass, BOOM!  ‘Pressure’ matches the pressure-cooker like the atmosphere of the venue.  BW’s sequinned red hi-tops are on that platform again and he plays with the crowd doing ‘That’s My Jam’ sing backs before the band launch into a fully interactive version of the song, the “got you in the palm of my hand” lyrics feeling quite apt.  Then it’s on more actions; queen waves; kung fu; rock fists; like a grown-up version of the Superman song.  Concert-goer Shin with an impressive green mohawk takes on the legendary sandwich challenge (get on stage and eat an entire sandwich in 30 seconds) – sadly the countdown clock is over before the sandwich is finished but there’s a Snickers handed over as a consolation prize.   ‘Kill The Power’ has all fists raised and mouths chanting. MD providing some essential vocal harmonies too.

There’s a change in both tone and pace as Benji gives a speech on showing love.  Mentioning the last time he saw his Sister.  A duet of ‘Struggle’ follows,  MD sat on a flight case playing acoustic guitar and BW singing the slow powerfully emotive song.  This one hits you in a different way.

The final song (before the encore) is ‘Nobody’ and the energy slides back up to maximum from all angles.  There’s a shared knowledge within the room as the band leave the stage that this isn’t over and the chanting and stamping “One More Song” begins.  The band head back on stage – an outfit change from Benji who is now sporting a “Unity” sprayed shirt.  He dedicates the next song to Joey Jordison and the band play a snippet of Slipknot’s ‘Duality’ “Make some noise for Joey!” he shouts before getting everyone to crouch down.  ‘Renegade’ sees the band instigate the notorious ‘Newport Helicopter’ with the T-shirts-off propellers before some proper goodbyes to the playout track over PA of “nobody does it better” – a fitting end to a great show.  For more news on Skindred and future gig dates for this tour go to: www.skindred.net