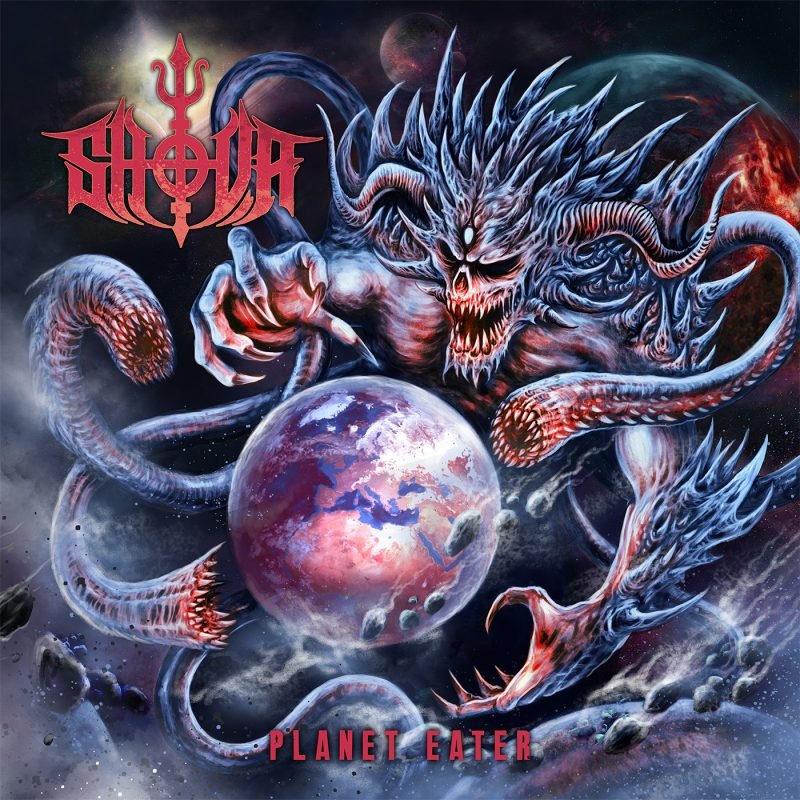 Clear any breakables from the room and make sure you limber up and stretch off before pressing play as the newcomer to the world Deathcore, Shiva is about to cause some havoc.

The trio based in Sydney, Australia, is about to release their debut album consisting of 11 tracks plus a curveball of a Kanye West cover, ‘New Slaves’ along with an instrumental bonus track.

As the album opens with ‘Hand Of Death’ and the djent-ish bass slaps, the blisteringly brutal vocal is joined by crushing drums to create a solid wall of noise that makes you just thrash around like a floundering fish. As the breakdown lands, you find yourself doubled over and head butting the floor in the most glorious fashion.

This general behavior continues as the album continues and without that space preparation, you would either break things or yourself as you are just consumed by this unreal Deathcore.

The huge chugs fill your head and push outward before those drums distort the resistance of your skeletal system and the vocal is that of nightmares and this perfect blend culminates in spine snapping brilliance.

If you have not completely lost your shut before the aforementioned cover of Kanye, this truly has to be heard to be believed. Whatever you think of the producer/rapper/strange fella, this cover is sheer genius and adds some genuine grit and delightful Deathcore to the rap offering.

Instrumental ‘Plagued’ is a touch of brilliance, allowing you to play vocalist with the track you heard partway through the album, test out your best ‘Core.

Whether you listen to aggressive music for the vocal, music, highs, or lows, Planet Eater has it all in its droves. ‘Animals’ is generally more on the melodic side of Deathcore yet still splits skulls and heavier offerings will leave you shattered in pieces on the floor.

I have to admit, I had a huge grin across my face throughout this album as it excited me from start to finish. There are ample ‘Oh Fuck’ moments and the general heaviness will flatten the hardiest of fans.

If there us a way to announce yourself to the world, this is it. Any fans of the genre, you need to hear this and make sure you clear the mess after you’ve lost your shit!

Planet Eater will be released July 9th 2021 via Realityfade Records.

6. The Glow That Blinds