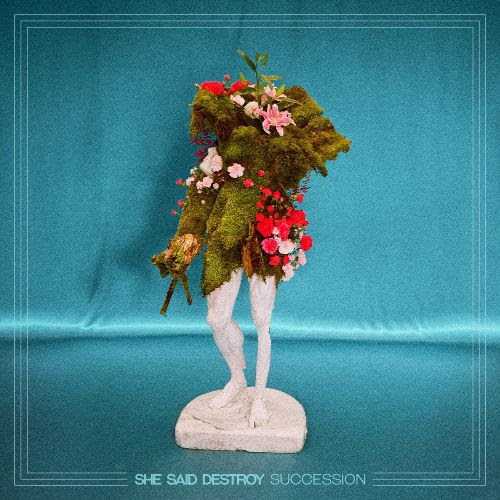 Norwegian post-metal collective She Said Destroy are now sharing their one-song EP “Bleeding Fiction II: Child of Tomorrow” in full ahead of the release date this Friday, November 25th through Mas-Kina Recordings.

A sequel to the band’s 2012 EP “Bleeding Fiction”, “Bleeding Fiction II: Child of Tomorrow” is now playing at Heavy Blog Is Heavy, who commented “The EP contains their signature mix of harsh vocals, brass instruments, and riff virtuosity, with passages moving between moving melodic chords, through more abrasive, crushing instrumentation, and all the way to the ethereal, haunting passages of the band’s post-metal roots.”

The EP “Bleeding Fiction II: Child of Tomorrow” consists of a standalone track of heavy duty, cinematic beauty. This song is a musical and lyrical sequel to their 2012 EP “Bleeding Fiction”, but can be seen as the band responding with a more mature voice both in terms of production and mindset to what they launched upon the world ten years ago, resonating with the messages their 2021 full-length “Succession” conveyed.

The song will be available through all streaming services on November 25. If you itch to hear this epic piece of epicness earlier and you happen to be a vinyl freak, as luck would have it, last year’s Succession is finally available on vinyl, and this release includes “Bleeding Fiction II: Child of Tomorrow”. Upon assembling Succession for a physical release, the band realized the album was too long for a single and too short for a double vinyl, deciding to include the EP on the D-side as a bonus. Orders are now available at the She Said Destroy Bandcamp page.

She Said Destroy was a pretty active live band since their inception in 2000 and have released two full-length albums, “Time Like Vines “ in 2006 (Nocturnal Art Productions) and “This City Speaks in Tongues” in 2008 (Tabu Recordings) until the year of 2009, when their some of their members moved to other countries. Still, the plan was to keep recording music and in late 2009 and early 2010 they recorded a one-song EP, “Bleeding Fiction” which was released in 2012 (Mas-Kina Recordings) before they disappeared, hindered by physical distance (Norway and Lithuania), other projects and an undeniable degree of fatigue with the whole trying to make it in the music scene hustle after more than 10 years as a band.