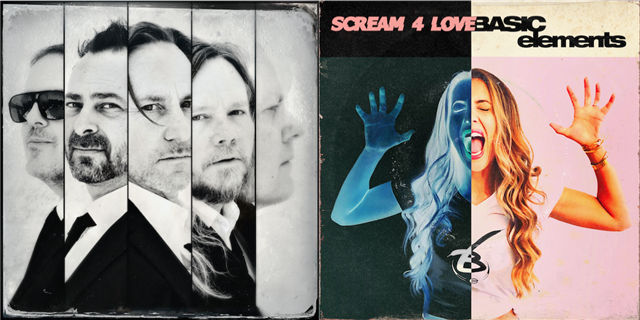 Basic Elements photo by Ashley Noelle Studios            Cover art by Todd Alcott
“Scream 4 Love” is a playful mantra dedicated to spreading love of every kind and it drops just in time for Valentine’s Day.
January 22, 2021 – Hot on the heels of their sophomore single, “New You,” Basic Elements is releasing their 3rd single, “Scream 4 Love” on Valentine’s Day weekend. Don’t let the Hallmark holiday fool you, “Scream 4 Love” is a bona fide love letter to Love itself. Bouncing between the mischievous and the mythical, “Scream 4 Love” pushes empathy and understanding and suggests one doesn’t have to be “in” love to express love – try finding that in a greeting card.
Produced by Ed Buller (Suede, Pulp, Psychedelic Furs) Basic Elements is a resurrected new wave group that peaked before its time. The band made a name for itself in the unheralded ‘80s Arizona music scene playing alongside local legends like Gin Blossoms, Gentlemen Afterdark and IRS recording artists, Caterwaul. They also opened up for post-punk touring acts like Bolshoi and Gene Loves Jezebel… all while maintaining an average age of just 17-years old.
Last year, after a 30-year hiatus working their day-jobs as a professional sculptor, a TV producer, a video-game attorney, a real-estate agent and a graphic artist, “B.E.” got back together to record the songs they wrote as teenagers in the ‘80s with one of their new wave idols. The result is pure, uncut 1985. Carrying echoes of early Depeche Mode and INXS, “Scream 4 Love” is a study in contrast: a poppy synth verse countered with a driving, catchy chorus, both bound by a roguish, layered message about love in its many forms.
Like the band’s previous releases, “Hide” and “New You,” “Scream 4 Love” was written in 1985, but of the five tracks the band recorded with Ed Buller, “S4L” is the song the band changed the most after their 35-year hiatus. Synth player, Jonathan Goldman, recalls: “We wrote it when we were 15-yrs old. I didn’t know how to sync a drum machine to a synth and run loops. We just played every part live. I’ve upgraded a bit since ‘85 but not too much. We still want it to sound live. This song is a blast to play live.”
The band will premiere a “live” lyric video that features them playing the song over the years but also incorporates a seamless live performance of “Scream 4 Love” from their 2019 reunion show at The Mint in Los Angeles. If anything, it’s something to look forward to – live music – and proof these guys can hold a crowd.
“Scream 4 Love” will also be presented as an official music video directed by indie wunderkind, Kansas Bowling (Killers, Iggy Pop/Death Valley Girls, Once Upon a Time in Hollywood). Bass player William Preston Bowling says of his offspring, “We gave Kansas her choice of song and she jumped on this one. Everyone has a favorite, so we’re excited to just sit back and let her do her thing.”
Since their October debut, Basic Elements has struck a chord with the new wave/post-punk crowd. Their music is in regular rotation on 93.9 KWSS FM (Arizona’s top alternative station) as well as legendary DJ Rodney Bingenheimer’s SiriusXM show. The LA Weekly premiered the band’s lyric video for “New You,” and they were guests on the Rolling Stone ranked podcast, “The Watt from Pedro Show,” hosted by renowned “Minutemen” bass player, Mike Watt. Basic Elements also found new fans on the Twitch stream hosted by Minneapolis DJ Jake Rudh and Slicing Up Eyeballs mastermind, Matt Sebastian, which pulls lively virtual crowds. Their music has also caught the attention of VMA winning director (and ‘80s aficionado) Chris Applebaum (Rhianna, Fountains of Wayne, Brittney Spears) who says, “It’s like Simple Minds and Scritti Politti rolling around in a sleeping bag together.” The director recently used “New You” for his EATS Channel New Year’s Eve clip featuring influencer MissKenzieAnne. Applebaum is also slated to direct a video for one of the band’s forthcoming releases.
In keeping with their previous releases, Basic Elements will produce a limited run of “cassingles” for “Scream 4 Love” that will feature the Buller produced studio recording on Side-A and an archival B-Side of the same song from a 1985 jam session in a Phoenix garage. The cassette comes equipped with a download card for those who lack a cassette player. Following “Scream 4 Love” Basic Elements will release the rest of the Buller produced songs over the course of 2021, building to the full release which will be pressed on collectible vinyl and feature archival B-sides of the original live 1985 recordings. It’s not often you get to discover new music from the ‘80s but Basic Elements does just that. Each song delivers a euphoric mix of nostalgia for original fans of Post-Punk/New Wave, and an exciting sense of discovery for the next generation finding the band on streaming platforms.