SCORES – Return with propulsive: “Over / Under” Single

Los Angeles and Lawrence, Kansas based indie-rock trio SCORES are back with their second single “Over / Under” – out Today.

Scores’ core members are veteran musicians: brothers Austin and Alexander Ward have performed in internationally touring alternative rock bands Hembree since 2016 and The Noise FM since 2005; CJ Calhoun is songwriter and vocalist in cult-favorite indie group Cowboy Indian Bear and releases solo music as Bonzo Madrid. The three musicians first crossed paths while living and performing in Lawrence, Kansas, USA — longtime mecca of indie music in the United States Midwest — becoming fast friends then roommates. The three had long talked about creating music together, but it wasn’t until a month-long backpacking trip through Europe that Scores came into existence and the band’s first songs began to take shape.

The scrappy, drum and bass guitar-driven rock of “Over / Under” is accented by synthesizers and a tinge of surf-rock psychedelia — an encapsulation of Scores’ love for both old-school rock band instrumentation and modern production.

“I specifically remember writing those words on a train out of Amsterdam and on a bus near Leipzig, Germany. I had just met someone prior to our backpacking trip, and it was jarring to me that I was experiencing all of these amazing things and having the time of my life traveling in Europe with my best friends, but I couldn’t stop thinking about her.”

The song is accompanied by a music video directed by band member Austin Ward.

“As the song was taking shape in the studio, we all kept referencing a coastal drive and the feeling of being abroad and travelling roads unfamiliar,” explains Ward. “We all kept coming back to this vision of a rad old sports car cruising along an Italian coast. I wanted to capture that feeling with the video but mix in some unsettling twists to match the glitchy sounds of the song, finding a nice middle ground of classic vibes and cool production.” 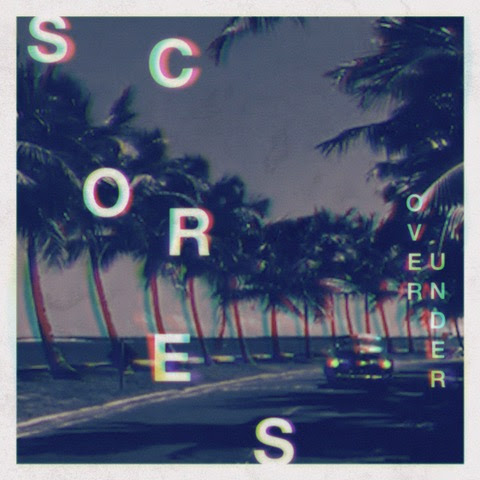