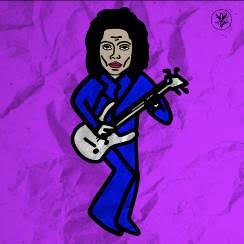 “A musical auteur… The most gifted polymath”

Vocalist, multi-instrumentalist, and composer Sananda Maitreya has released the video for ‘One Horse Town’, the latest single from his 12th studio album Pandora’s PlayHouse. The double-disc record was released on Sananda’s own label, TreeHouse Publishing.Watch the ‘One Horse Town’ video via YouTube.

Sananda has teamed up with award winning director Alessandro Cocchia to create the visual story in coordination with Eidmar Productions, who also produced the video for ‘PIE’ and ‘The MadHouse’. This is Sananda’s second collaboration with Alessandro, who designed the cover for his 2011 album The Sphinx, which in turn became the visual style inspiration for ‘One Horse Town’.

“What a playful, chameleonic, chimeric talent Sananda Maitreya is… Time to get reacquainted”

Whilst the lyrical themes deal with racism, the overall message is one of hope and unity, as Sananda explains, “Here we have a song which easily explains the nexus crosses of jealousy & race, and how evil hides behind philosophy, tradition, & belief to prevent itself from being seen. In any event there is only one race, the Human Race. So we are all these different tribes that are all unique & special because if nothing else, we survived, we are still here. As long as the love is felt, in whatever form allows it to be; this is what one horse town rides into town to explain.”

Alessandro’s main objective was to portray the music’s contrast and opposites, and interpret what he describes as Sananda’s way of “dealing with a dramatic theme with gentleness, elegance and with irony”. Further explaining the visual story, Alessandro describes ‘One Horse Town’ as “a fairy tale, and like all great fairy tales in history, it has a light dress to convey an important and sometimes dramatic message. I used this work to explain what intolerance and racism is, but also diversity and bullying. The message is that you are a hero, even when you are beaten”

“His creativity has not been blunted”