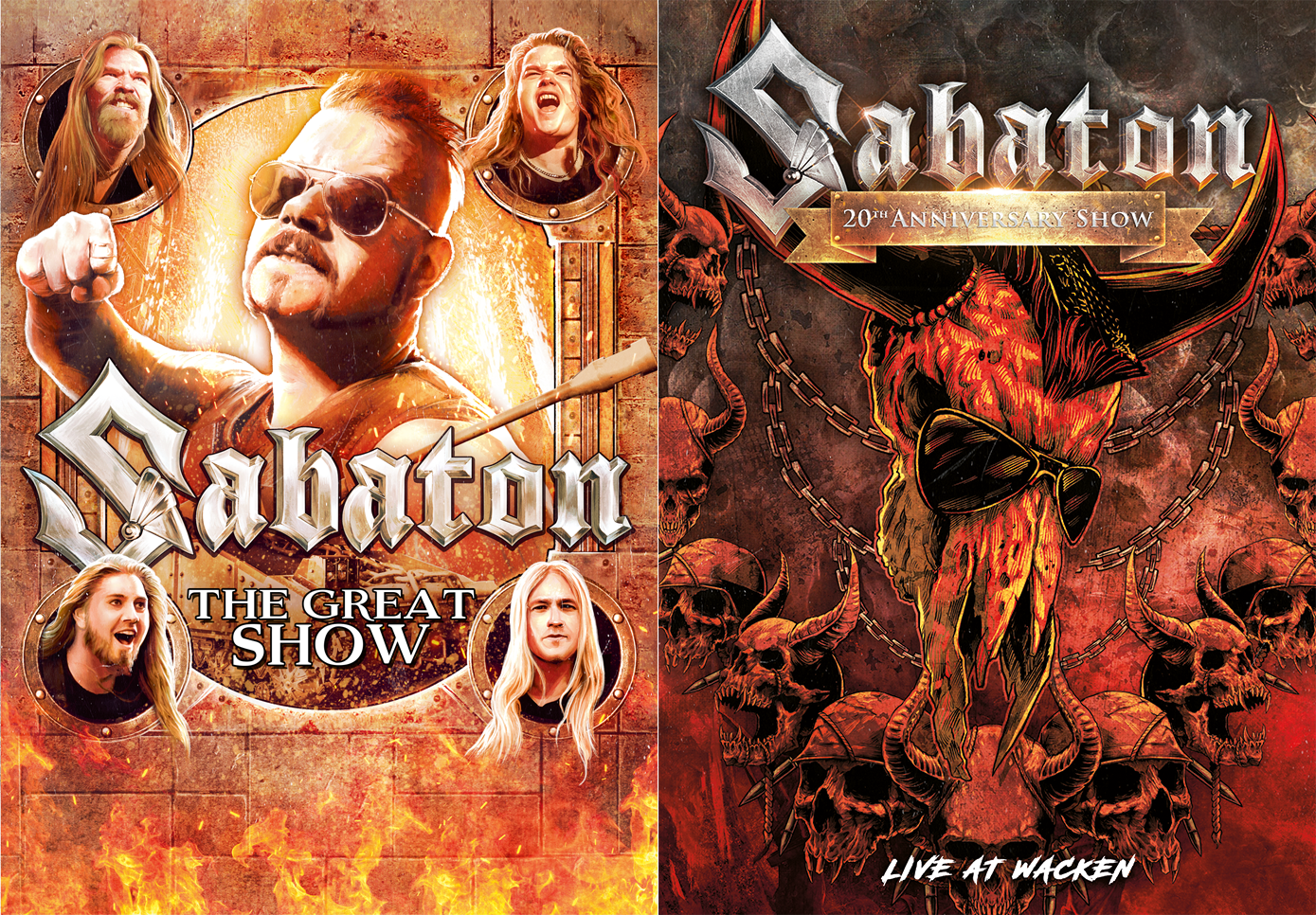 Multi-Platinum Swedish metal band SABATON today announces the limited-edition, live-in-concert, double-DVD/Blu-Ray, ‘The Great Show’ and ‘The 20th Anniversary Show’ both set for release on November 19th via Nuclear Blast. Both titles were filmed during the band’s 2019-2020 ‘The Great Tour’ world trek, and both feature special guest performers. Track listings are below; pre-orders begin today and can be placed here.

‘The 20th Anniversary Show’ is comprised of SABATON’s jaw-dropping, two-hour headline concert filmed in front of 75,000 fans at Germany’s Wacken Open Air Festival – coincidentally, celebrating its 30th anniversary – on August 1, 2019.  ‘The Great Show’, with a running time of about 90-minutes, was recorded at SABATON’s sold-out performance at the O2 Arena in Prague on January 26, 2020.  With two varied setlists chosen from the band’s extensive catalog, ‘The Great Show’ and the ’20th Anniversary Show’, limited to 9000 copies each, will be available as individual purchases or bundled together as ‘The Great Show Stage Collector’s Edition’ box set (limited to 5000 copies), that includes a building bricks version of the Sabaton stage so fans can build their own stages. You can watch the trailer here.

For the greater part of the Wacken concert, SABATON commandeered the festival’s two main stages, the side-by-side-and-connected Faster and Harder Stages, becoming the first artist in Wacken’s 30-year history to utilize both stages simultaneously in this way. Vocalist Joakim Brodén, guitarists Chris Rörland and Tommy Johansson, drummer Hannes Van Dahl, and the 20-voice Great War Choir, fitted out in a variety of military uniforms, performed on the Faster Stage.  At the same time on the Harder Stage, bassist Pär Sundström welcomed back previous Sabaton members Thobbe Englund and Rikard Sundén/guitars, Daniel Mÿhr/keyboards, and Daniel Mulback/drums – all nine musicians, plus the choir, giving an intense and impassioned en masse performance. SABATON was also joined by the internationally acclaimed GRAMMY-nominated virtuoso cellist Tina Guo for the encore. Prague’s ‘The Great Show’ reunited SABATON with Finland’s multi-Platinum cello-rockers, Apocalyptica, who provided a fiery orchestral backing to several of Sabaton’s songs.

In support of SABATON’s most recent chart-topping album The Great War, ‘The Great Tour’ saw the band setting the barre sky-high for live rock’n’roll stage production. Both sets of discs effectively capture the visually electrifying in-concert experience that is a Sabaton show. Sabaton’s cinematic songs transport fans onto the battlefield, encountering the horrors of war as well as acts of heroism and bravery, based on historical fact and told as if through the eyes and minds of soldiers in the line of fire. For ‘The Great Tour’ and as seen on both of these DVD/Blu-Ray sets, SABATON’s live stage production was forged as a battlefield, with barbed-wire stretched across the front of the stage, stacks of sandbag barricades, mic stands fashioned after the period’s rifles and trench guns, a two-ton military tank complete with a battery of rocket launchers and flame jets that doubles as a drum riser, a keyboard built into the body of The Red Baron’s iconic blood-red tri-plane, and Brodén armed with a giant bazooka.

Live rock’n’roll at its finest.

Ghost Division
Winged Hussars
Resist and Bite
Fields of Verdun (with Thobbe Englund)
Shiroyama (with Thobbe Englund)
The Red Baron
The Price of a Mile
Bismarck
The Lion From The North
Carolus Rex
40:1
The Last Stand
The Lost Battalion
Drum Battle (Hannes Van Dahl vs. Daniel Mullback)
Far From The Flame
Panzerkampf
Night Witches
The Art of War
82nd All The Way
Great War
Attero DominatusEncore:
Primo Victoria
Swedish Pagans (with Tina Guo)
To Hell And Back (with Tina Guo)

SABATON is a five-piece heavy metal band from Falun, Sweden. Since the band’s formation in 1999, SABATON has achieved quadruple Platinum sales and performed colossal concerts in over fifty countries.

The band’s ninth studio album, “The Great War”, released on July 19, 2019, is a musically rich concept album capturing the sinister atmosphere of World War I – thus continuing the band’s trademark style of telling unforgettable stories from merciless battlefields all over the planet.

Sabaton, signed to the world’s biggest heavy metal label, Nuclear Blast Records, played “The Great Tour” at major European festivals, and throughout North America, and Eastern Europe in support of The Great War.

SABATON has put the “COVID downtime” to good use, writing, recording, and releasing a variety of stand-alone singles and music videos.  The band played its first post-pandemic date on July 9, performing in front of 40,000 fans when they headlined the Exit Festival in Serbia.  In January/February 2022, they will headline a 29-date tour of Sweden, followed by the launch of the massive “The Tour To End All Tours” on March 4 in Norway.

As you might guess… There’s no end in sight for this unstoppable war machine anytime soon!

The Tour To End All Tours
w/ THE HU, LORDI
presented by Cobra Agency