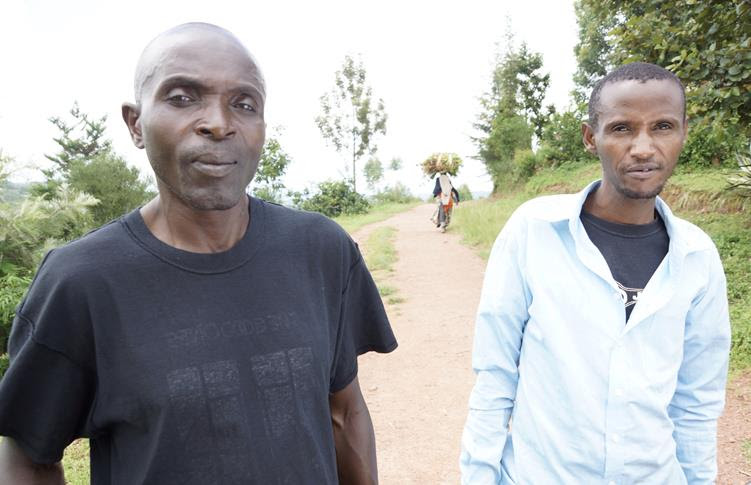 “The trio’s music is stripped down, using largely acoustic and often homemade instruments, but intensely emotional … The unadorned production treads a careful line, letting the emotional honesty of the vocals carry the weight of the song.” – Afropunk

“A breathtakingly tender trio from Rwanda … Although they sing in Kinyarwanda,
the musicians evoke America’s rural blues in haunted harmonies that seek light in the shadow of devastation.” – The New Yorker

Rwanda’s The Good Ones have debuted their new single “Soccer (Summer 1988)”today via NPR’s acclaimed Tiny Desk series. “Adrien Kazigira and Janvier Havugimana know endless hardships,” NPR explained. “The night before this recording was made, a flood in Rwanda killed more than a dozen people and destroyed homes.” Watch the performance HERE.

“Soccer (Summer 1988)” is a classic end-of-summer song— a tale of nostalgia for Rwanda’s favorite soccer team, Rayon Sports F.C., in the more innocent days before the 1994 genocide which claimed some of the team’s players and countless fans. It is a first-take without overdubs, recorded in bandleader Adrien Kazigira’s barn. At this particular meeting, Adrien and co-lead singer Janvier Havugimana played each song together for the first time. Yet, with only a minute or two discussion beforehand, they fell in so seamlessly that these virgin ventures were indistinguishable in ease from the stalwart songs they’d played for decades. Such it is with two gifted men that have harmonizing together since childhood.

In November of 2019 The Good Ones released their critically acclaimed third album Rwanda, You Should Be Loved, which was produced by Grammy-winner Ian Brennan and featured guest collaborations with Wilco’s Nels Cline, TV On The Radio’s Tunde Adebimpe, Fugazi’s Joe Lally, Sleater-Kinney’s Corin Tucker,  and more. The Good Ones also embarked on their first ever US tour at the end of 2019, opening for renowned singer songwriter Glen Hansard as well as headlining their own select dates.

Since they live without electricity and have had little access to devices to reproduce musical recordings, The Good Ones’ vocalization is based on the singing traditions and dialect of their local agricultural district. They utilize one-of-a-kind instruments as well, often incorporating their own farming tools for instruments. On “Soccer (Summer 1988)” Janvier uses a milk-jug for percussion, filled courtesy of Adrien’s prized cow. Primary songwriter Kazigira interweaves intricate harmonies with Havugimana in a style frequently referred to as “worker songs from the streets.” With their rural and remote hilltop origins, the harmonic similarities to American Bluegrass vocals is often eerie. “They create a compelling sound which is traditional yet fresh,” said the BBC.

Order ‘Rwanda, You Should Be Loved’