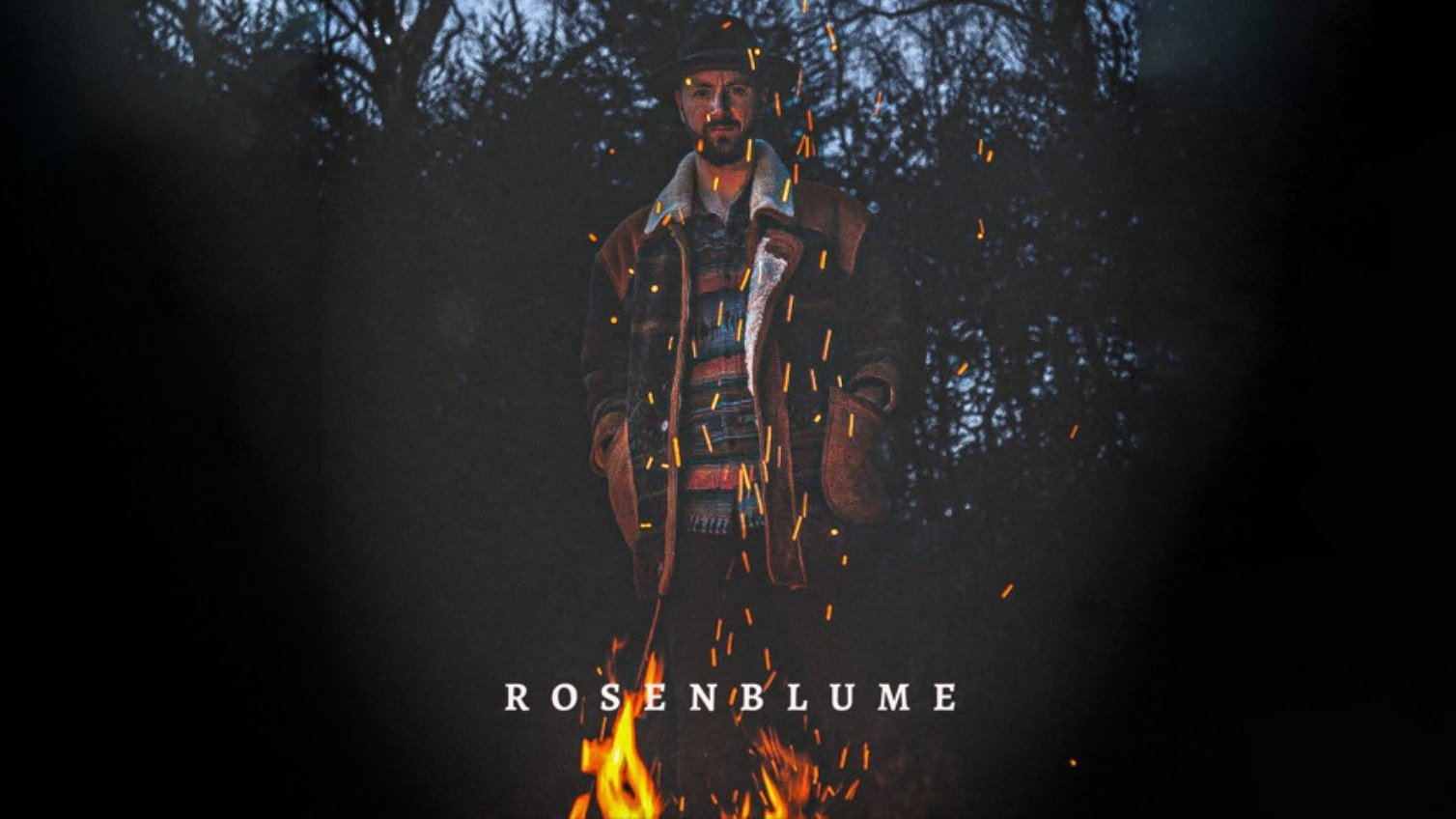 Inspired by the folk greats of Greenwich Village, Laurel Canyon and beyond, ROSENBLUME displays his penchant for songs wrought with passion and emotion, breathing new life into an art of writing long forgotten.

And on 24th September 2021, the Liverpudlian troubadour will present his magnificent debut album: ‘Rosenblume’.

In anticipation of the release, Rosenblume is pleased to present the atmospheric video for its leading single “Knight In Shining Armour”. Watch here: //www.youtube.com/watch?v=P9oowPg1QNM
Written in just a few hours, “Knight In Shining Armour” nonetheless pulses with the flow and finesse it can take some artists a lifetime of searching to find. Genteel in its delivery and unassuming in its earnestness, it’s a song of unrequited love to rival the best; breathtakingly beautiful on the surface and heartbreakingly honest beneath. As Rosenblume explains:

“I kind of just came up with it and the rhythm of it came naturally… Lyrically the song was inspired from hearing that a girl I’d been in a long term relationship with had found someone else. It cut me a little bit deeper than I thought it would and a sudden realisation that I was no longer her “Knight In Shining Armour” hit home.”
The track is a strident introduction to ‘Rosenblume’. His first extended release since his debut EP in 2015, Rosenblume’s first full-length album may have been a long time coming but promises to be every bit worth the wait.

Growing up Rosenblume’s main influences came from his father’s cassette collection in the car as they spent many journeys listening and singing along to The Beatles, Simon & Garfunkel, The Drifters, Sam Cooke, Crosby, Stills & Nash, Neil Young, James Taylor & Carole King.  Seeping into every fibre of his DNA, it’s easy to detect elements of all of the above and so much more in his classic songwriting stylistics. From the skiffling beat of opener “Enough To Burn”, to the expansive Van Morrison-esque pastoral flourishes of “Knight In Shining Armour” or “Name In The Sand”, the hammond-organ guided Americana of the Glen Hansard-inspired “Turn Every Fire” (complete with blazing guitar solo), the low-slung blues/funk grooves of “Halfway There” or the hushed, stripped-back balladry of tracks like “In The Long Run” or “Paint Things Red”; Rosenblume explores the avenues of his heroes with noble conviction.

Anchored with his rich, earthy vocals, these are songs from the soul. With a plaintive, confessional style that will connect deep within and linger on the mind for some time, ‘Rosenblume’ finds the Liverpool songwriter touching on themes of old flames and blossoming romances,  sepia-tinted memories and new beginnings. “It’ll Be Alright”, a track inspired by Jackson C Franks’ “Blues Run The Game”, finds Rosenblume channelling his inner Paul Simon to offer a consoling arm to friend thousands of miles away. Elsewhere, “Enough To Burn” finds him summoning the courage to reply to a songwriter and ex-lover from his past after many years of reflection. A number of co-writes also feature on the record that see ‘Rosenblume’ pushing into new stratospheres too. From the cosmic soul searching of “Darkness Before The Light” written with good friend Jimmy Docherty, the anthemic aspirations of “Name In The Sand” (written with Ian Peacock), to the heart-of-glass fragility of the Becky Tate co-penned “In The Long Run”; alone and in partnership, Rosenblume’s lyrics will strike a chord of emotional depth and make a profound resonance.

Written in locations as far flung as South East Asia to right here in his native Merseyside, ‘Rosenblume’ was recorded at The Cabin & Parr Street Studios in Liverpool and produced by Alec Brits (I See Rivers, O & O).

Speaking about the upcoming album and working with Brits, Rosenblume says:

“After recording and producing the first EP myself I really wanted to bring in a producer for the album. I felt having someone else during the creative process would really help me push boundaries and broaden my vision a little. Alec is such a talented guy and definitely hears things differently than I do. Having him there and having me try things I wouldn’t normally try really helped the creative process and I’m super excited about how the tracks have turned out.”

Surrounded by music as long as he can remember, it was in 2015 that Rosenblume first found a wider audience with his assuredly confident debut EP:  “All Through The Fire, All Through The Rain”. Gaining 120,000+ plays on Spotify and included in some high profile playlists including New Music Friday & We Are Folk, the EP also saw Rosenblume gain support with national radio play including BBC Radio 2’s Bob Harris & spot plays on the Bauer Network. Establishing himself with high profile shows in support of major acts like Jack Savoretti, Luke Sital-Singh and Robert Vincent and performing to the crowds of The British Country Music Festival, Summertyne Americana Festival and even Glastonbury; Rosenblume has earned a dedicated following who keenly await his only-too-rare releases.

With just one single in 2019 (“Turn Every Fire”) and a very quiet 2020 (for obvious reasons), Rosenblume now steps back into the limelight in 2021, with the stage set for his remarkable debut album and a flurry of activity. With a number of singles planned and more surprises, Rosenblume will also be playing a full-band headline launch show at Ten Streets Social in his hometown of Liverpool on 23rd September to commemorate the release of the album before the record hits the shelves.