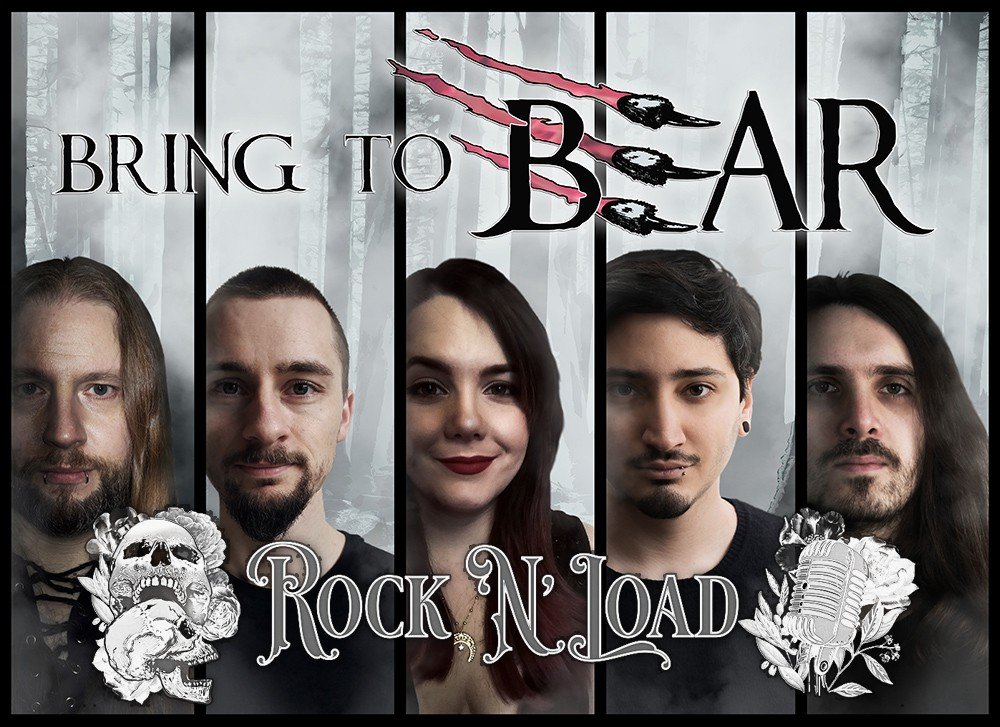 We are super excited to chat to Ian Tarboton (Accordion, Keyboard & Growls) from fresh UK-based Symphonic Folk Metal Band BRING TO BEAR on the day of their debut release THE SHADOW RUSE. Thank you for the opportunity to chat. Foremost, where have you been hiding, as this track is on fire … please share your origin story!

BtB: Thanks very much for describing it so kindly, and thanks for this chat – we are very happy to share our journey and music with everyone. Hristo and I (Ian) met through playing in a gypsy punk band together and we both love metal. We ended up writing The Shadow Ruse for that band originally but it didn’t fit there, so we decided to make it heavier and start a metal band with it. We then wrote a couple more “style demos” and used these to bait the others into joining us through Bandmix and Facebook. We remained a remote project until the day we entered the studio!

Who’s who? Please introduce us in detail to each member in the BRING TO BEAR Crew.

BtB: Hristo is originally from Bulgaria. He plays guitar (and is also a really good bassist), and is heavily influenced by Grunge and Metal. I am Ian originally from South Africa and play accordion, keys and do the growling. I am very influenced by Symphonic Metal and Folk Metal, as well as viking music and film scores. Izabela is our lead vocalist, originally from Poland. She loves a variety of styles. Nik is our other guitarist, and comes from Russia and the UAE. He really enjoys Melodic Metal and Melodic Death Metal. And Simon, our drummer, is the only local UK band member. His tastes include Death Metal, Folk Metal and Traditional Thai music.

What was the paramount driving force behind establishing a band, and releasing debut material in these challenging dark days of Covid?

BtB: Aside from the way we began as I said earlier, we chose to push it now because it gave us the time to really craft what we wanted to go for. Covid gave us time to work on the sound we wanted without other things trying to take up our time and attention. We saw it as a great opportunity for creativity and setting a good foundation. We also realised that with music listening being mostly online these days, and with people doing more things online due to Covid, it was a great opportunity to get our online presence set up and available to as many people as possible.

We love the textured assortment of sounds and instruments in your arrangement. What, and who inspired you to create this superb blend of Symphonic Folk Metal (with notably the inclusion of an Accordion)?

BtB: We effectively have 3 lead instruments (2 guitars and the accordion), and 2 types of vocals, and it’s quite a challenge to balance the variety in our sound. We end up having to be ruthless with cutting things out yet try hard to maintain balance between repetition and variety within a song. Our main approach to the songwriting is to try and keep it punchy and to the point, quite unlike a lot of symphonic metal bands which tell a longer story. We wanted the energy and hooks from our punk influence to be played with strong driving guitar riffs and really powerful drums.

With the metal components of our music we take inspiration from the likes of Amon Amarth, Pantera and Mushroomhead; and with the melodic aspects we draw from the idea of Nightwish on accordion and Amon Amarth with accordion. Korpiklaani naturally also has an influence. Accordion is a really great instrument!

Please tell us more about your debut single THE SHADOW RUSE; what does it mean, how did you decide on this track, the writing and recording process … we want to know it all!

The lyrics are about the balance between light and dark, or perceived good and bad. When you look at something from one point of view it might seem good but the same thing from another point of view might seem bad. Sometimes this gets confusing like shadows playing games in the mind. But ultimately things are more balanced and the difference is the way we look at it. When we see the balance we are able to enjoy the game of shadows. The same can be said for the different parts that make up a person, and when we accept that we have different sides to our personality we can appreciate ourselves more.

The writing process happened remotely where Hristo wrote the basic guitar riffs and song structure, and he emailed a home recording to me to come up with accordion parts. I wrote and recorded the accordion parts at home and emailed them back. So a collaborative back-and-forth process, followed by video call debates on the structure and length.

We went through 2 rounds of home recording trial runs, where each band member recorded their parts separately and it got mixed together layer by layer. This worked well as preparation for when we entered the studio to record, because actually hadn’t even had a single rehearsal before recording in the studio!

Your visual identity and supporting creative content are rich with fabled symbolism and mythical elements. These look impressive and imperative to the BRING TO BEAR brand. Please share insight on their creation, meaning and importance.

BtB: Thanks very much. Yeah this was something we thought about and we realised that our music sounds adventurous, and the lyrics in many songs, as well as the inspiration of our brand, are to do with the adventure of going after what you love doing and what you really want in life. So this led to the fable/fantasy style imagery and choice of natural settings. The bear represents the dual meaning of the band name and also the growled vocals, and in folklore bears often represent strength and courage. The lady is an adventurer and also represents the female vocals in our music. If you look carefully there are also some viking runes “carved” into the trees which indicate the viking music influence, and the particular runes used were chosen for their meanings.

Are you planning more singles soon, or will you be releasing an EP or Album next?  Any upcoming shows or streams? What can new fans look forward to next from BRING TO BEAR, and when … because we want more!

BtB: We are releasing an EP in September which will have 3 tracks – 2 originals and 1 cover. And then we have 2 more originals which will likely be ready later in the year, but no album is on the cards at this stage as we’d rather be able to release songs in quicker succession so people don’t have to wait too long and an album takes a lot of time to write, record and have ready for release. We are hoping to start with some gigs this summer and we’ll definitely keep everyone updated on where and when!

Any special mentions or shoutouts you want to make before we conclude this chat and go rock THE SHADOW RUSE? Thank you again BRING TO BEAR for the time, and best of luck with the release!

BtB: Thanks again for the interview and giving our music a chance, and thanks to Devographic our PR manager for helping us to share our journey. We really hope people enjoy our music as much as we love making it, and that it motivates them to do what they love.