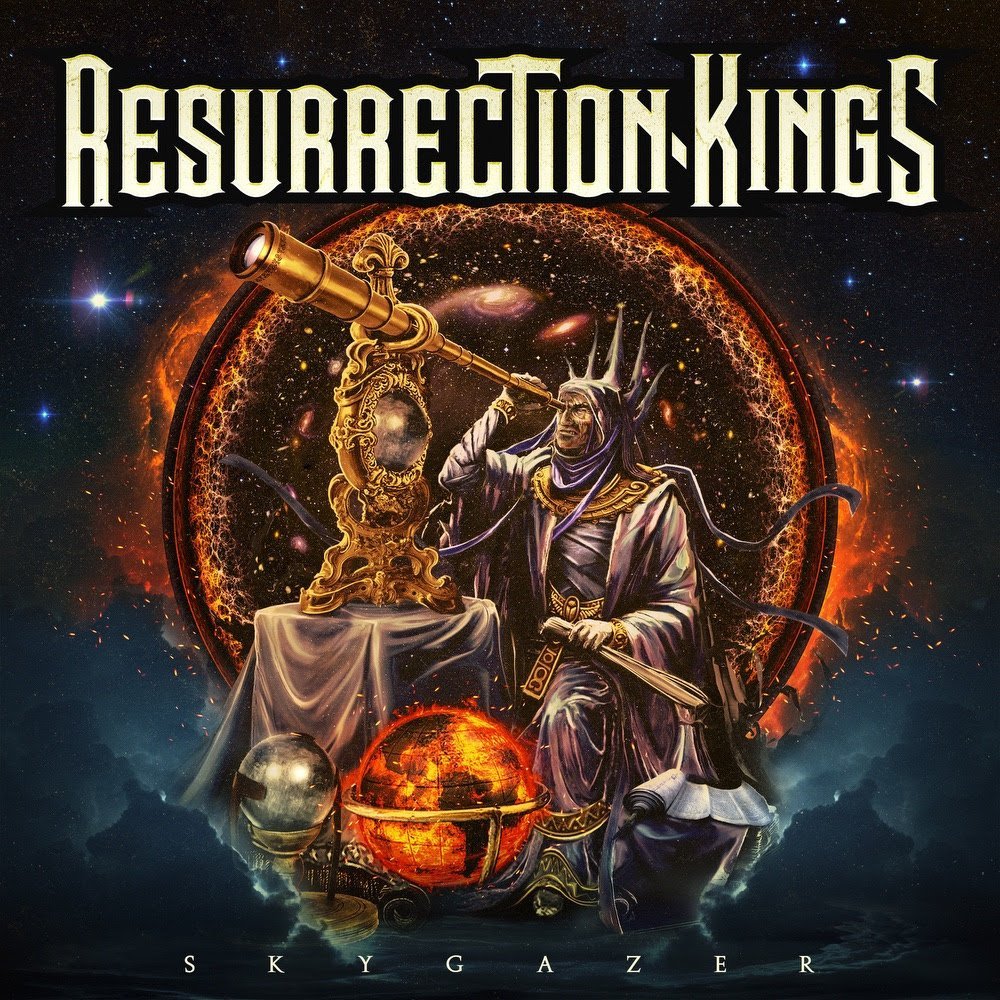 Comprising the core trio of Craig Goldy (guitars), Chas West (vocals) and Vinny Appice (drums), Resurrection Kings announce their return with the upcoming release of a second album. ‘Skygazer’ follows 2016’s self-titled debut and picks up where that record left off, offering a magnificent set of riff-heavy songs resplendent with catchy hooks and melodies.

States guitarist Craig Goldy: “We all brought our ‘A’ game to the making of this album. With the freedom to utilise the music we were all influenced by that started our musical endeavours to begin with, hopefully we expanded upon them in a way that will in turn inspire another generation of listeners to start a similar journey.”

Goldy is truly on fire here, hitting every note with passion and feel. Vocalist Chas West shows off his massive pipes, delivering an exquisite performance. As ever, Vinny Appice is rock solid behind the kit. Fans who loved the mix of ’70s and ’80s hard rock/metal vibes of the band’s debut will find much to admire on ‘Skygazer’.

In regard to the title track and first single, Goldy adds that “it started out with a drum groove sent to me by Vinny. His unequalled playing style automatically inspired the music and then [producer and keyboardist] Alessandro Del Vecchio wrote most of the melody lines and lyrics. Besides the music, I wrote the melody and lyrics for two pre-choruses that sum up the song’s meaning. It is a metaphor for the lengths to which our nations’ leaders will go to acquire, keep or grab more power for their own ambitions. That leaves us in their wake asking what measures are needed to defend ourselves. All of this comes at what price though?”

Resurrection Kings is centred around Craig Goldy, of Giuffria and DIO fame. The idea for the band sprang from a set of demos he had recorded with renowned singer Chas West, who has worked with the likes of the Jason Bonham Band, Foreigner, Tribe Of Gypsies and his own band, West Bound (also signed to Frontiers). Frontiers President Serafino Perugino prompted Goldy to put together a line-up that also included former DIO/Black Sabbath and current Last In Line drummer Vinny Appice.

Produced and co-written by Alessandro Del Vecchio (Revolution Saints, Hardline, JORN, etc), the trio’s self-titled debut record was an impressive example of classic hard rock with a contemporary production and edge, mixing vibes of Whitesbnake’s ‘1987’ with DIO’s ‘Dream Evil’ and adding a touch of classic Led Zeppelin and Rainbow. It was a fun record where the musicians involved were able to stretch their wings and really go for it with their playing. For this second effort, the band’s performances coupled with Del Vecchio’s production makes for a massive album that will surely be a hard rock highlight of 2021!