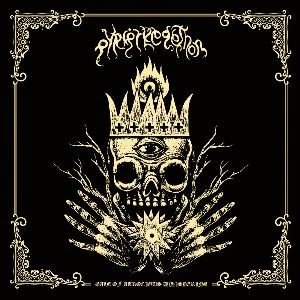 Pyriphlegethon sees the Dutch one-man project created by Maurice De Jong of Gnaw Their Tongues return for the third time under this heading as he tackles the sounds of Finnish and Norwegian Black Metal from the early 90s.

The 8 track album spans approximately 36 minutes and even the instrumental opener just oozes that Black Metal vibe, with a muffled finish, the guitar riffs in a classic pattern as the drums really drive hard toward the chorus and the vocal is distant but blood spewing.

As you are transported back to a time of simpler and more underground Black Metal, you can’t help but feel the warmth of an old frowned upon friend as you almost feel the acidity from the vocal spray through your speakers and make the skin feel uncomfortable.

The guitars continually work away with the simple riffs and drones that engrain themselves into your brain and start to dull the senses as the drums act in a hypnotising metronome manner, the result of which is a trance-like state that is not going to let go of its grip easily.

As the album progresses, it is clear to see that De Jong is not only recreating the classic sound but is also a huge fan who wants to pay respect to this important era of music and paved the way for the modern Black Metal sound. De Jong not only shows huge amounts of respect but also shows how talented he is.

Gales Of Atrocious Whispering is a solid addition to any collection of Black Metal as the music brings imagery of the grainy black and white from days gone past as the temperature drops immediately across the baron wastelands. Pyriphlegethon may be one of many projects that De Jong is part of, however, he has put everything into this offering and the results are something to be admired.