On the debut offering the Canadian terror cult unleash a sonic armageddon of implausible proportions that will stand high as one of the most uncompromising displays of aural terrorism to see the light in 2019. After a debut full-length and a followup EP, with this brand new sophomore LP of monumental violence Profane Order have sealed their most abominable and aberrant pact with complete chaos and ruin so far, and conceived a work which will elevate the band’s reputation as an embodiment of complete terror at a whole new height, consecrating them as a complete aberration of creation. Slave Morality sees the band and their horrid sonic apocalypse come full circle and blossom into the weapon of mass destruction it had always prophesied it would become on past releases, standing as their most accomplished and merciless work to date as well as establishing them as an absolute threat in the Canadian extreme underground and beyond. Fusing the cold and malefic grimness of black metal with the most bludgeoning strains of death metal and the blind terror of grindcore, withSlave Morality Profane Order pay homage to long time war metal cults like Archgoat, Blasphemy, and Conqueror, while crossing new and never before seen thresholds of musical barbarism, extremizing the sub-genre even further and standing as a monument to violence and negativity entirely their own.

A taste of the album’s uncompromising violence has been provided by iconic metal blog Last Rites who’ve premiered the track Perverse Demoniac stating that “If the new track, “Perverse Demoniac,” is any indication, Profane Order are stepping it up once again, marrying the more riff-focused approach of their first work with the punishing brutality of ‘Tightened Noose’ to create a masterwork of sacrilegious hyperviolence” – you can check out the feature HERE.

Bastion metal blog No Clean Singing has likewise praised the album and unveiled this song Hexed (Defiling God’s Child), claiming that on the track “the sound is abrasive and hateful, but it’s not utterly saturated in distortion. You can make out what’s happening — and the riffing changes. It rises, writhes, and falls in a display of dismal yet boiling, plague-like infestation“ – you can check out their feature and listen the song HERE.

Begotten of a wretched womb, Profane Order are formed in 2015, and has undergone several lineup changes since their inception, with the exception of lead guitarist, vocalist and songwriter Illusory (Also of Spectral Wound) being the only constant member and main driving force. Their journey officially began in 2016 with the self-release of the Marked by Malice debut full-length which first introduced the band’s inhuman aural war zone to the masses establishing them as an absolute threat in the Canadian extreme underground. The feat was repeated and exponentially augmented with the blinding chaos summoned in their followup EP Tightened Noose of Sanctimony released the following year by French extreme metal dealers Krucyator Productions. Now, Profane Order return with the unholy sonic armageddon of Slave Morality, their most uncompromising and lawless album to date. The horrifying album will once again see Krucyator Productions handle the CD while a cassette tape version will surface from Canadian tape darkness forge Les Fleurs du Mal Productions and with Sentient Ruin gifting the band’s music with a vinyl release for the first time in their brief existence.

Slave Morality can now be pre-ordered on vinyl and digital formats through our Bandcamp and or store. 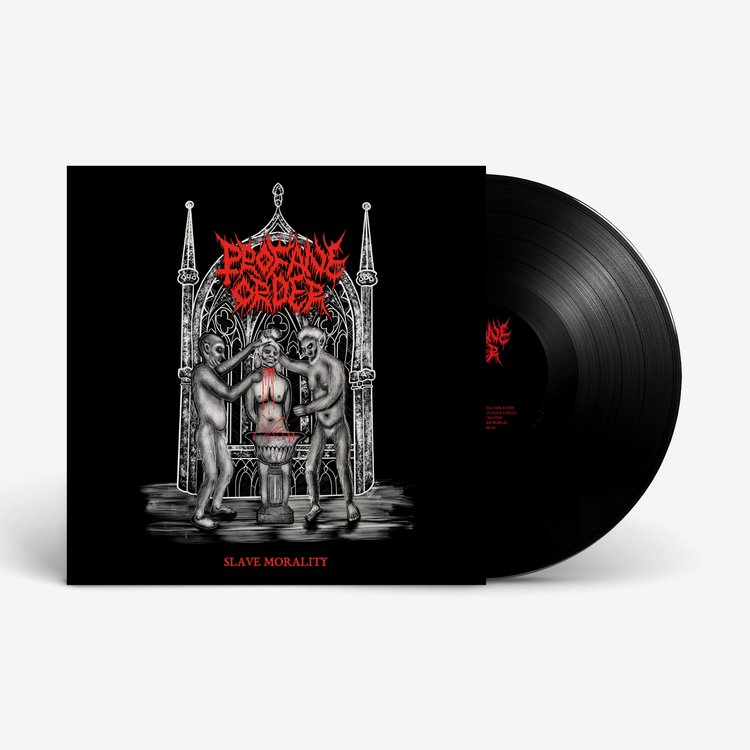